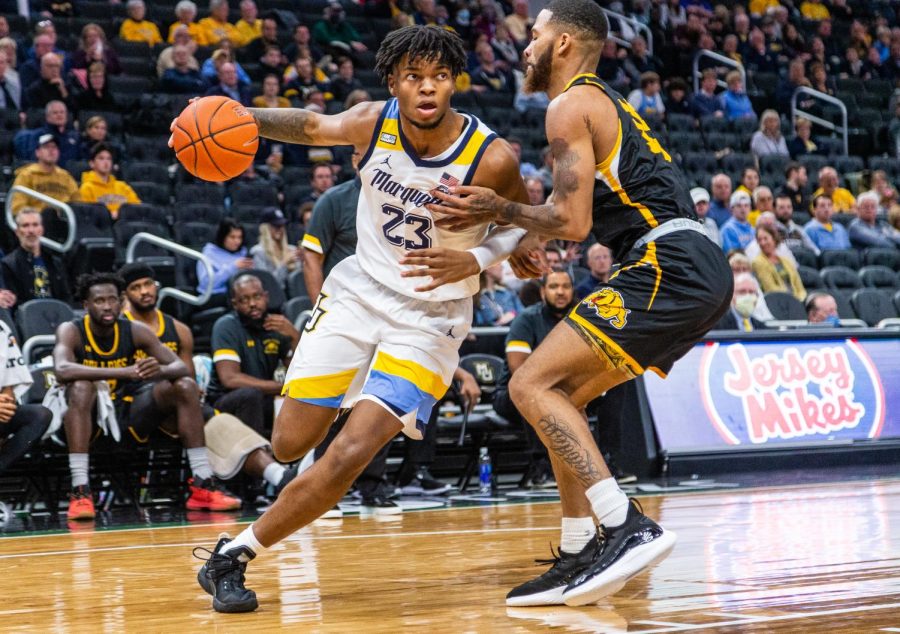 Balanced scoring, steady defense and veteran play allowed the Bonnies control most of the game.

Marquette couldn’t get shots to fall and was bothered all night by the Bonnies defense as they shot just 17-for-56 (30%) from the field and scored a season-low 54 points.

St. Bonaventure took advantage of their size in the first half as 26 of their 33 first-half points came inside the paint. The Bonnies outscored the Golden Eagles 50-18 in the paint throughout the entire game.

Redshirt first-year forward Justin Lewis kept the Golden Eagles within striking distance at halftime as he put up 11 points and seven rebounds in the opening 20 minutes. Lewis ended the night with a team-high 17 points on 6-for-13 shooting and 11 rebounds.

The Baltimore, Maryland, native was named to the All-Shriners Children’s Charleston Classic Team after averaging 18.3 points and 8.0 rebounds in Marquette’s three games.

Despite a poor shooting performance in the first half 9-for-30 from the field, Marquette went into the halftime break only down 33-25.

The Bonnies would continue to increase their margin over the Golden Eagles, leading by as many as 27 at one point in the half.

Marquette’s shooting woe’s continued in the second half, as it took the Golden Eagles over eight minutes into the half to make their first field goal.

Turnovers were also a key factor throughout the contest as St. Bonaventure outscored 28 points off of Marquette’s 17 turnovers.

Senior guard Jaren Holmes led St. Bonaventure on the night with a game-high 19 points and 13 rebounds.

Senior center Osun Osunniyi was another force for the Bonnies on the night, posting 16 points on an  efficient 8-for-10 shooting from the field to go along with 11 rebounds.

First-year forward David Joplin scored a career-high 10 points off the bench for Marquette as he was the only other Golden Eagle in double figures besides Lewis.

Graduate student Darryl Morsell and redshirt first-year Tyler Kolek both struggled shooting the ball for Marquette, as the duo combined to go 0-for-13 from the field on the night.

Marquette (5-1) will now recoup over the Thanksgiving holiday before taking on the Northern Illinois Huskies Nov. 27  at Fiserv Forum at 7 pm. CST.