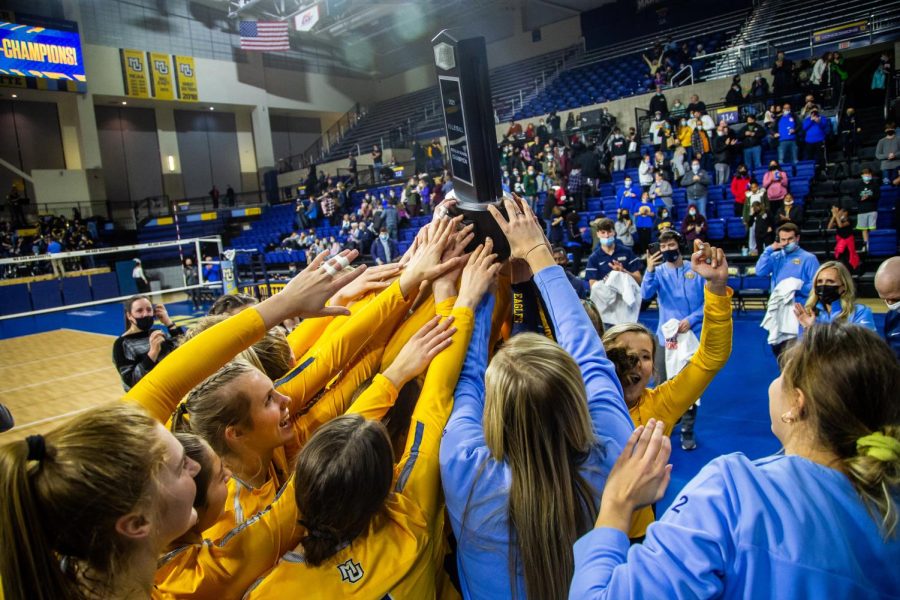 Marquette volleyball holding up the BIG EAST Regular Season Trophy after its 3-0 win over Villanova Nov. 20.

In its regular season finale, Marquette volleyball defeated Villanova in straight sets (25-13, 25-19, 25-21) to earn a share of the BIG EAST Regular Season title Saturday night at the Al McGuire Center.

It is the first time since 2013 that the Golden Eagles claimed at least a share of the BIG EAST regular season crown.

“So happy for the group to celebrate on our home floor and the BIG EAST trophy to boot on it and throw the T-shirts on afterwards,” Marquette head coach Ryan Theis said. “A great experience for the team.”

Theis said while Saturday’s contest was for recognizing the teams senior, the team was more focused on capturing the hubcap.

“Our seniors are just a really mature group of people that are excited to have this opportunity to play for a championship tonight,” Theis said. “I think that was so much more their focus than “this is the end” cause it’s not, they’ve got the conference tournament and they know they have NCAA’s and so this is kind of celebration along the way.”

It was all Marquette in the first set, with the Golden Eagles leading the whole time and taking it 25-13. In the frame, first-year outside hitter Jenna Reitsma led the charge for Marquette with four kills, four service aces and a block.

Wolf said the effort from Reitsma help translate into the teams energy.

“She was really going off on the service line” Wolf said. “She’s got a wicked serve and it definitely showed so that helped our team a lot with energy and momentum.”

The start to the second set was a completely different story.

As it was in the first frame, Marquette jumped out to an early advantage. But Villanova would knot all things up at eight all after a 6-3 run. Then the Golden Eagles regained momentum and took the set 25-19 after Wolf finished it with a kill.

The third frame was much like the previous two sets, with Marquette rolling out to lead and Villanova battling back.

Villanova did not give up fight, as a 4-0 run trimmed Marquette’s lead to three points. However, the match would end on a net violation from the Wildcats to hand the Golden Eagles with another sweep over a conference opponent.

Theis said his team didn’t execute enough to make Villanova earn their points down the stretch.

Reitsma led Marquette with 11 kills and a career-high five service aces. Wolf had a triple-double with 11 kills, 14 assists and 12 digs. Rennie and Koontz added nine and five kills respectively on the night.

On the night, Marquette dominated from the service line collecting 10 services aces compared to Villanova’s one.

Theis said he was impressed with not just the volume of aces, but the types of aces as well.

“Some different speeds, people varied some stuff to get some different kind of aces which was nice to see,” Theis said.

On Friday in Marquette’s 3-0 win over Georgetown, Werch went down with an apparent knee injury. Theis said following Saturday’s match, the team is still checking with doctors on her status heading into next weekend’s BIG EAST Tournament.

The Golden Eagles will await the result of Sunday’s Creighton vs St. John’s game to see if they will be the No. 1 or No. 2 seed in next weekend’s conference tournament at the Al McGuire Center.

“It’s gonna be exciting, we get to have it on our home court,” Wolf said. “I know that teams are gonna be itching for a championship and so are we, so it will be a good competition.”