Marquette suffers first loss of the season to Colorado 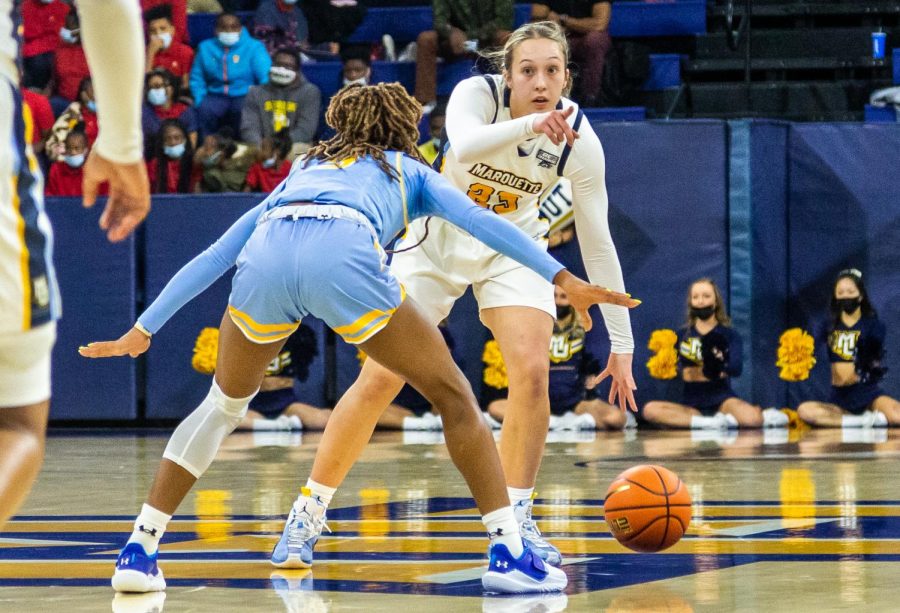 Jordan King (23) calls a play from point guard in Marquette's 60-45 win over Southern Nov. 15 at the Al McGuire Center.

Marquette women’s basketball suffered its first setback of the season Friday night as they came up short 69-53 against University of Colorado at CU Event Center.

At the end of the first quarter, it was knotted up at 15-15, with Marquette being led by sophomore forward Liza Karlen’s five points in the opening frame.

The start of the second quarter followed a similar trend as the first, resulting in both teams trading blows.

Then Colorado began to separate themselves over the final five minutes of the first half. The Buffaloes finished the second quarter on a 9-0 run to take a 33-25 lead into halftime.

It was the first time this season that Marquette went into the locker room at halftime in a deficit. In the first half, the Golden Eagles shot 40% from the field while the Buffaloes shot 46.7%.

Sophomore guard Jordan King led the Golden Eagles at the half with eight points, while going 2-for-2 from beyond the arc.

Starting out the second half, Colorado jumped out to a 10-point deficit.

Despite Marquette bringing the deficit within four at the three minute mark of the quarter, Colorado responded to take a nine point lead into the final frame.

Colorado was able to keep up that pace in the fourth quarter, holding Marquette to a three minute scoreless drought, cruising their way to a 69-53 victory.

For the first time this season, Marquette was outscored by its opponent inside the paint 24-40.

On the night, the Golden Eagles turnover the ball 23 times which resulted in 13 points for the Buffaloes.

King led Marquette on the night with 16 points, going 6-for-13 from the field and 3-for-6 from beyond the arc, along with five rebounds, one assist and a steal.

Two other Golden Eagles ended in double digit figures on the night as Karlen and graduate student forward Lauren Van Kleunen add 11 points each on the night.

Marquette (3-1) will remain on the road as they travel to the Daytona Beach Invitational following the Thanksgiving holiday break. The Golden Eagles will match up first with Middle Tennessee Nov. 26 at 11 am CST.