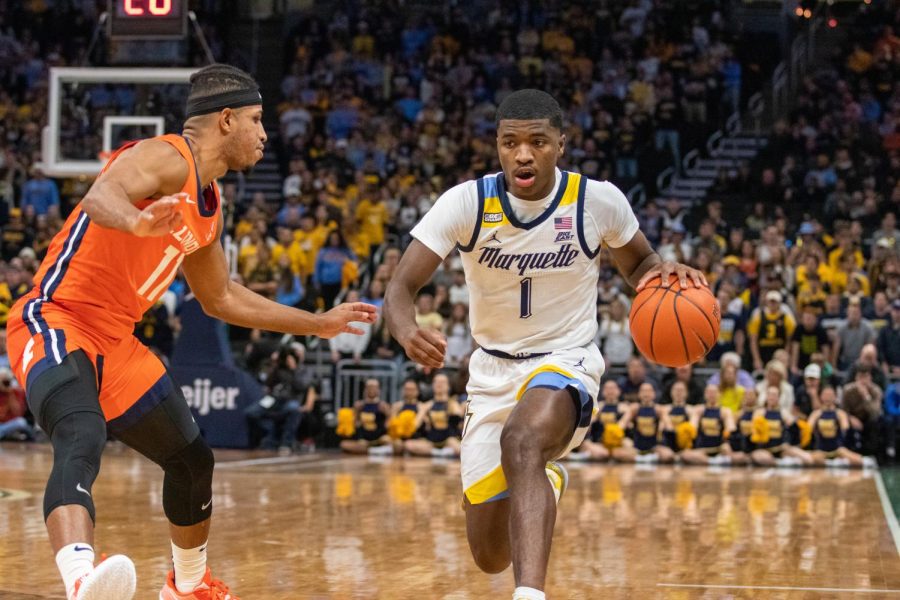 After defeating Ole Miss in the quarterfinals of the Shriners Children’s Charleston Classic Nov. 18, the Marquette men’s basketball team took on West Virginia in the semi-finals Friday night and came away with a 82-71 win to remain undefeated on the season.

Marquette has to come back once again to win this one, as West Virginia had control of this game in the first half.

The Mountaineers had a 12 point lead at the halftime break thanks to shooting 58% from the field, including going 5-for-7 as a team from beyond the arc. Marquette shot 44%, while allowing West Virginia to score 13 points off turnovers.

Fifth-year guard Taz Sherman was hot in the first half, going 5-for-9 from the field with 14 points. He finished with a game-high 21 and also picked up five assists.

In the second half, Marquette stormed back thanks to a barrage of 3-pointers. They went 8-for-13 from beyond the arc in the second half alone and 12-for-26 on the game as a whole.

“Every game we’ve had this year we’ve come out and played pretty well in the first half and then came out flat as can be in the second half,” West Virginia men’s basketball head coach Bob Huggins said in a statement.

The lead flipped a few times from that point, but Marquette was eventually able to control the game, in part thanks to four 3-pointers from first-year guard Kam Jones to account for all of his 12 points on the night.

The Mountaineers cut the deficit to as close as five in the final minutes, but the Golden Eagles were able to close it out and pick up their fifth consecutive win to start the season.

The Golden Eagles were led on the night by redshirt first-year guard Tyler Kolek. Kolek scored a season-high 18 points on 7-for-12 shooting while also collecting six rebounds and a team-high eight assists.

Finishing just one point behind Kolek was redshirt first-year forward Justin Lewis, who finished with 17 on 7-for-15 shooting. Lewis also finished with five rebounds, four assists and continued to not shy away from the 3-point attempts, taking seven and making three.

Graduate student forward Kur Kuath was also a part of the Golden Eagles comeback in the second half down low. He went 4-for-4 from the field with five rebounds and three blocks as well on the defensive end.

Redshirt junior guard Greg Elliott made his season debut tonight for the Golden Eagles after being suspended the first four games due to a “failure to adhere to department policies,” Marquette head coach Shaka Smart said after the team’s exhibition against Bowie State Nov. 4. He came off the bench and went 0-for-2, scoring one point from the free throw line.

This is the first time Marquette has started a season 5-0 since the 2011-12 season when the Golden Eagles won their first 10 contests.

Marquette (5-0) advances to the Shriners Children’s Charleston Classic Championship Game Sunday vs No. 22 St. Bonaventure. That game will be on ESPN with tip-off scheduled for 6:30 p.m. CT.