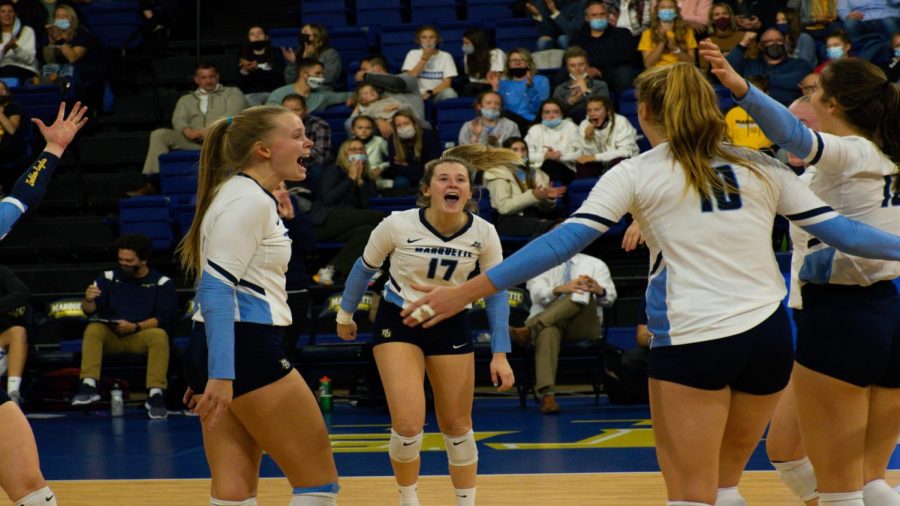 Marquette volleyball celebrates during its 3-0 win over Georgetown Nov. 19.

In its second to last game of the regular season, Marquette volleyball hosted the Georgetown Hoyas Friday night and came out with a straight-set sweep (25-23, 25-19, 25-16) at the Al McGuire Center.

“I thought we started really sloppy,” Marquette head coach Ryan Theis said. “I thought Jenna (Reitsma) came in and had a great day off the bench. I thought it was one of her best matches of the year.”

The first set was back-and-forth throughout with no team getting a lead bigger than three points. Towards the end of the set, Marquette went down 21-18 focing Theis to call a timeout.

Coming out of the timeout, the Golden Eagles outscored the Hoyas 7-3 to take the set 25-23.

“Katie (Schoessow) had a nice serve run, put a lot of pressure on them,” Theis said. “That kinda opened the door.”

In the set graduate student Hope Werch went down with an apparent knee injury. Werch returned later in the match and sat on the bench with ice around her knee.

After the match, Theis said he did not have an update on Werch’s injury.

The second set was defined by both teams going on multiple runs with the biggest being a 6-0 run by Marquette that gave them a 17-15 lead.

The Golden Eagles wouldn’t look back after regaining the lead at the end. Marquette finished off the set on a 3-0 run, which included two kills from graduate student Savannah Rennie, to take a 2-0 advantage in the match.

The third set started off close until Marquette went on a 3-0 run to make the score 6-3. As the case was in the previous set, the Golden Eagles wouldn’t look back cruising their way to a sweep.

Redshirt senior Kaitlyn Lines made her first appearance of the season in the set with a serve.

“I love seeing her back out there, she’s going to suit it up again tomorrow we’ll give it another shot,” Theis said.

First-year Jenna Reitsma and graduate student Savannah Rennie led the way on the night for Marquette with 11 kills each.

With the win, Marquette moves to 20-4 all-time against Georgetown and  11-0 at the Al McGuire Center against the Hoyas.