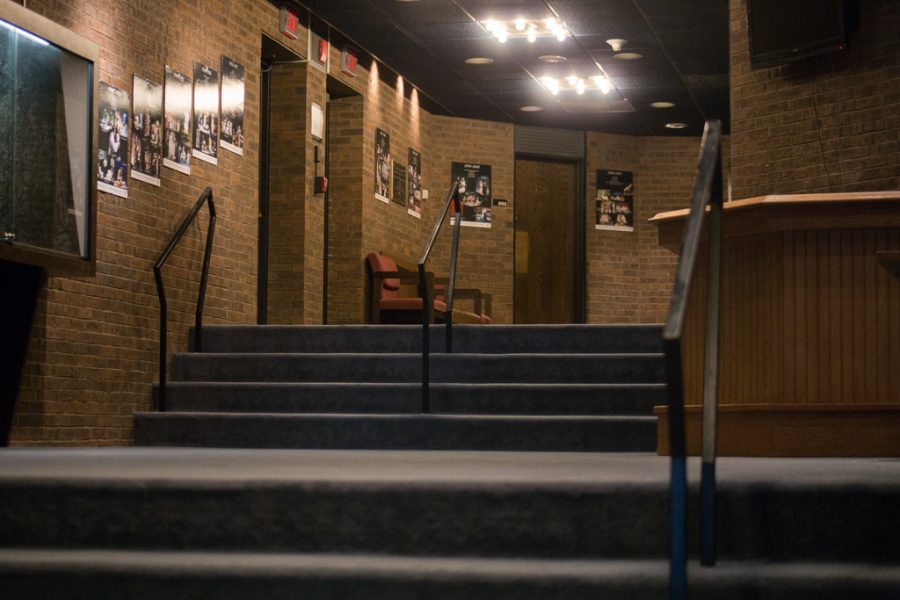 "Melancholy Play" will be presented at Helfaer Theatre through Nov. 22.

What happens when a dear friend/lover suddenly turns into an almond? There’s no clear answer, and don’t expect to find a solid one in Marquette Theatre’s production of “Melancholy Play.”

Despite this large cast of colorful characters, one really stood out as an enduring comedic force: Senior in the College of Communication Katie Dickey plays Joan, Frances’ girlfriend and stoic nurse. Her initial entrance in the play has her staring angrily at Frances from the back of the stage, which doesn’t sound very funny, but coupled with Dickey’s dominating glare and Leonard’s terrified stance downstage makes for a hilarious introduction.

Read also got the chance to try out his comedic chops in the first few scenes, where he professes his love to Tilly, much to her chagrin. Unfortunately, once the play gets underway Lorenzo appears less and less, leaving Read’s best moments at the beginning of the show.

The play itself wasn’t quite my style. What starts as a charmingly offbeat look into Tilly’s life and her affairs ends as a completely surreal fantasy about almonds. Almonds are a repeating theme throughout the show, as characters compare themselves and sadness itself to the nut because they are “dry, like bark.” Many of the jokes fall flat, which I believe is due to the confusion between what is supposed to be funny and what is meant to be a profound revelation: The two are often confused, such as when it is revealed that a character has turned into an almond and laughs were clearly expected by the actors but were not received.

Much of the blocking and many of the stylistic choices helped the audience feel transported into an alternate, dreamlike reality. The set consists of floating windows and clouds, reminiscent of “The Truman Show,” which immediately sets the tone of the play. Many scenes end with a dramatic look into the audience accompanied by a strong “dun dun dun” sound effect that reminded me of a campy telenovela. It was amusing the first time, but soon the audience found many scenes ending in this fashion, and it came off as a flat joke-y way to end the scene rather than a real moment of comedy.

The costumes effectively inform the audience of each character’s personality: The hairdresser wears a 70’s getup, the nurse a nurse’s uniform, and Read sports an obviously fake thin “European-style” mustache. Torkilsen’s costume is delightfully nerdy, and even has a connection to Leonard’s within the show. At intermission, a friend I saw the show with pointed out that Torkilsen and Leonard had the same glasses on. At this point in the show they hadn’t met yet, so it wasn’t clear if this was intentional, but a reveal at the end confirms that the two are linked in an unanticipated way, making the glasses a clever piece of foreshadowing.

Although the show itself has many outlandish moments, the most eccentric moment of the show doesn’t seem to be an intentional choice, nor is it part of the script. At the end of Act 1, Tilly sings a song, and at the beginning of Act 2 her friends do the same. Rather than singing live, the actors’ voices were pre-recorded and played over the speakers while lip syncing onstage. This was a pretty jarring moment, but to their credit the cast did such a phenomenal job of lip-synching that about halfway through the song I forget it wasn’t being sung live. I was informed post-show by Leonard that this was not a conscious choice made to increase the level of surrealism in the show, but rather needed to be done because Marquette’s COVID-19 guidelines do not allow singing unless masks are worn onstage.

“Melancholy Play” is an absurdist farce that certainly lives up to the classification, with plenty of horseplay and broad buffoonery. A night of both comedy and confusion is certain.

This story was written by Nora McCaughey. She can be reached at eleanor.mccaughey@marquette.edu.