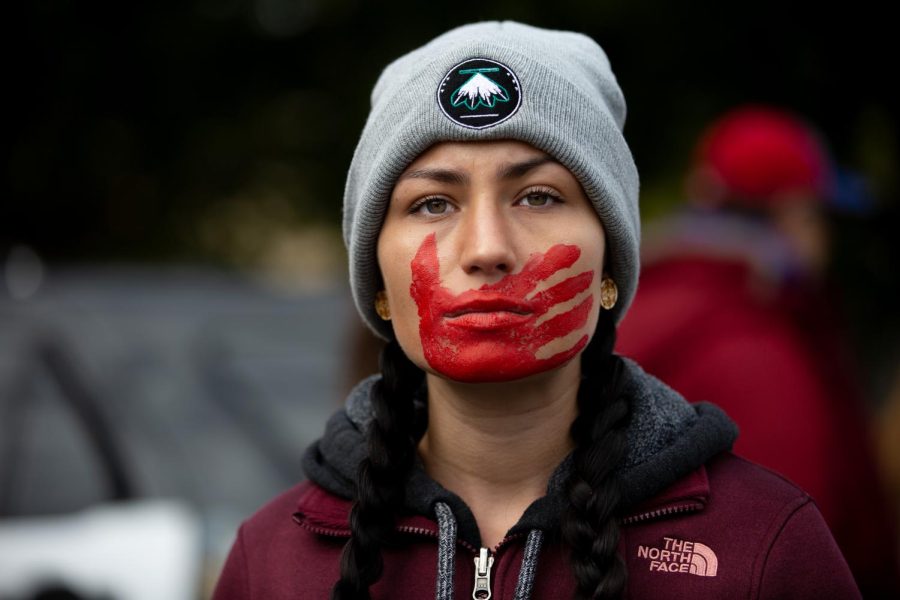 A protestor at the 2018 Greater Than Fear march in Rochester, Minnesota wears a red painted handprint on her face, a symbol of the MMIW movement for the women who have been silenced. Photo via Flickr

Indigenous women and girls are 10 times as likely to be killed than other ethnic groups, according to Native Women’s Wilderness, a nonprofit organization that uplifts voices of Indigenous women.

The U.S. Government Accountability Office released a report Nov. 1 outlining the absence of a comprehensive federal database for cases of missing and murdered Indigenous women. This report came two years after more than a dozen members of Congress wrote a letter to the agency calling for an investigation into missing and murdered Indigenous women due to a persisting concern about their safety from communities, grassroots organizations and politicians.

The violence against Indigenous women is severe, startling and sickening.

Moreover, in some Indigenous communities, Indigenous women face murder rates that are 10 times higher than the national average, according to the U.S. Department of Justice.

Despite the disproportionate violence Indigenous women experience, there is no comprehensive federal database for cases of missing and murdered Indigenous women in the U.S. The lack of data can be attributed to several reasons, one of them being that Indigenous communities sometimes have a persisting distrust of police due to a history of racism and violence against them. This can lead to unreported cases, the U.S. Department of Justice and the U.S. Department of Interior failing to set up a joint commission to investigate the issue and an inconsistency in reporting requirements for different agencies.

The U.S.’s lack of dedicated resources toward cases of missing and murdered Indigenous women is unacceptable. Being extremely vulnerable due to their intersectional identities, as well as a history of government sanctioned violence against Indigenous women.

Considering Indigenous communities have been the target of U.S. government sanctioned assimilation through boarding schools, diaspora, cultural and ethnic genocide and treaty violations throughout history, there needs to be more immediate action to investigating cases of MMIW.

One source of the increase in MMIW can be attributed to the rise of “man camps” at pipeline construction sites. Man camps are temporary settlements of male workers that spring up near the construction sites of pipelines, which are often near Indigenous communities and reservations. One example of this near Wisconsin was the arrest of employees of Enbridge, a pipeline company, for sex trafficking in July. The Enbridge employees were working on a tar sands pipeline called Line 3.

Another source of MMIW is the government’s lack of resources and consideration under the 1994 Violence Against Women Act, which was the first federal law to criminalize domestic violence. While this led to the allocation of federal funding for both sexual assault and domestic prevention and services for women in the U.S., Indigenous women were not included at first. Indigenous women were not specifically named in the 1994 VAWA until its 2005 reauthorization. This ultimately aimed to dedicate funding to tribal governments to support people who have experienced sexual assault, provide access to national criminal justice data and mandate research on violence against Indigenous women.

Still, the VAWA has failed Indigenous women, as they experience higher rates of sexual assault, domestic violence, intimate partner violence and stalking compared to women part of other racial and ethnic groups.

Indigenous women have also been failed by the U.S. due to its settler colonial history that has persistently sexualized and objectified them. As Europeans, especially men, came over to the United States during early settler colonialism, Native women were often stereotyped as being welcoming hosts and sexual entities; this has evolved  into pop culture representations today like Disney’s 1995 “Pocahontas” and provocative Halloween costumes.

It is clear why MMIW has been deemed a national crisis. The violence against women needs to stop everywhere and that includes paying specific attention to Indigenous women who are more likely to experience violence in their lifetimes.

Recently, Wisconsin Attorney General Josh Kaul attributed jurisdiction issues, human trafficking and drugs as potential contributors to murdered and missing Indigenous people. Kaul created a MMIW Task Force in Wisconsin that is dedicated to investigating the issue in an effort to provide recommendations for legislators and law enforcement.

Indigenous researchers have identified 22 cases of missing and murdered Indigenous people going back to 1980, even though there is no formal state data existing on the issue. The lack of comprehensive data on the state and federal level is atrocious and unjust.

Unless government agencies at every level take immediate action to collect data and actually follow through on investigating cases of MMIW, all levels of governments will continue to violate and disregard Indigenous women, continuing to support a pervasive colonial history.

This story was written by Alexandra Garner. She can be reached at alexandra.garner@marquette.edu