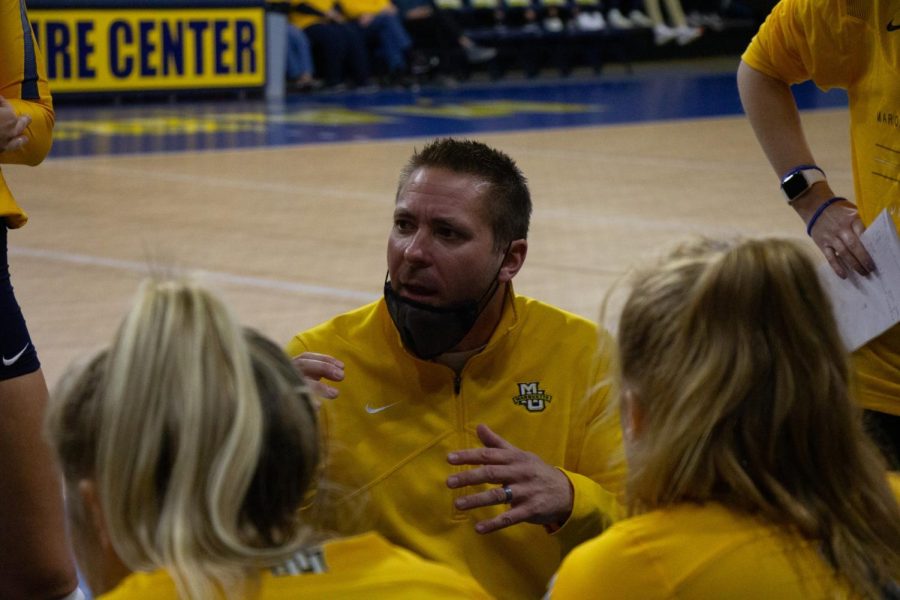 Marquette volleyball head coach Ryan Theis is in his eighth season at the helm of the Golden Eagles.

The Golden Eagles’ 22nd win of the season marks the 100th career BIG EAST victory for Marquette head coach Ryan Theis. He is now 323-115 career overall and 179-61 overall at Marquette.

After dropping the first point of set one, Marquette went on a 5-0 run to take an early 5-1 lead. The Golden Eagles would hold the lead for the remainder of the set with Xavier getting within one point only once. Graduate student Hope Werch capped off the set with a kill to hand Marquette the 25-20 set victory.

Marquette would have an even attack in the first set with redshirt junior Ellie Koontz having six kills, Werch having four and redshirt first-year Carsen Murray and graduate student Taylor Wolf having three a piece. The Golden Eagles hit .297 in the set while the Musketeers hit .188.

The second set would be dominated by Xavier as they went on an early 3-0 run and then a 7-0 run that would give them an 11-4 lead. The Musketeers would hold a lead as big as 10 in the set before ultimately winning the set 25-15.

The third set would start back and forth until Marquette would go on a 6-0 run that included three service aces from redshirt sophomore Claire Nuessmeier. The run would give Marquette a 10-5 lead.

Marquette would continue momentum, going on a 3-0 run that would force an Xavier timeout. Coming out of the timeout, the Golden Eagles would go on a 4-0 run to bring the score to set point at 24-14. The Musketeers wouldn’t give in as they’d go on a 4-0 run of their own, forcing Marquette to call timeout.

Xavier’s come back would be little too late as Wolf would end the set on a kill to give Marquette a 2-1 match advantage. Marquette had 14 kills while hitting .273 and Xavier would have nine kills and hit .088 in the set.

The fourth set started with Marquette going on a 3-0 run. With this initial lead the Golden Eagles wouldn’t look back, but Xavier would get to within one when they’d be on a 3-0 run to make the score 11-10. Marquette responded to that run with a 5-0 run of their own and broke the set open.

Xavier would respond but would only come within two of Marquette before the Golden Eagles won the set 25-21. Marquette hit .417 in the final set and Xavier hit .282.

The Golden Eagles were led by Werch who finished with 15 kills on the match. Wolf would finish one dig away from a triple double as she ended the afternoon with 13 kills, 25 assists and nine digs. Graduate student Savannah Rennie added 12 kills and Koontz contributed 10 on the day.

Next up for the Golden Eagles is the Bulldogs of Butler who they’ll play on Sunday at 1 p.m. to finish their four game road trip.