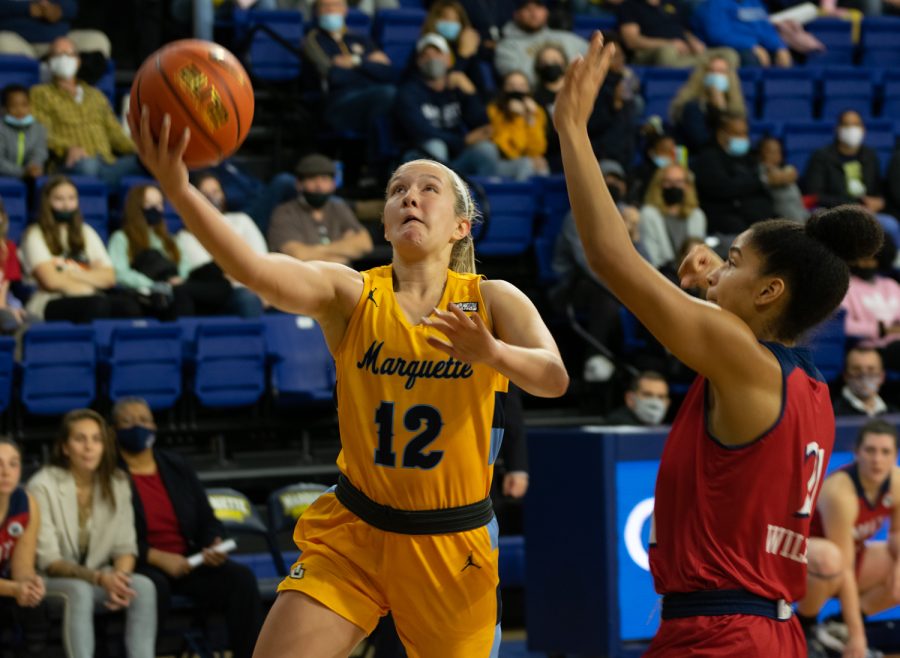 “Thrilled about the win tonight,” Marquette women’s basketball head coach Megan Duffy said. “Thought there were a lot of people who contributed. Just really thrilled with Chloe Miranda’s performance almost had triple double and she’s always been a player for us that does all the little things so just to see her filling up the stat sheet tonight was great. Excited to get this one.”

The start to the first quarter was tight contested between both teams. Following the under-five media timeout, Marquette began to open up the frame while its offense held NJIT to one basket for the remainder of the quarter to build a 22-10 lead heading into the second.

“There were a couple adjustments made,” redshirt first-year forward Liza Karlen said. “One thing that they are pretty good at is back screens which is something we really focused on blowing up in practice. Just keeping that mindset of covering, communication, covering for each other and covering that drift pass that they love so much, I think that was really important for us.”

The Golden Eagles continued their momentum in the second quarter going 56.3% from the field in the 10 minute quarter. Graduate student guard Karissa McLaughlin went three-for-three from beyond the arc helping Marquette go into halftime with a 45-26 lead.

First-year forward Makiyah Williams and redshirt first-year Julianna Okosun both saw minutes towards the end of the half. Williams finished with six points on the night while Okosun added two points and three rebounds.

NJIT opened up the second half with a 4-0 run forcing Duffy to burn an early timeout 1:34 into the third quarter. The Golden Eagles took a 21 point lead into the fourth quarter after outscoring the Highlanders 18-12 inside the paint. Redshirt sophomore guard Jordan King scored six of Marquette’s 21 points in the frame.

In the final quarter, Marquette outshot NJIT 23 to 12 cruising their way to a 90-58 victory. Williams and redshirt sophomore forward Kennedi Myles led the Golden Eagles with four points a piece in the frame itself.

For the second straight game, McLaughlin led the way for the Golden Eagles finishing with 22 points, shooting 8-for-16 from the field and 4-for-8 from beyond the arc, four assists, two steals and two rebounds. It is the 14th time the Fort Wayne, Indiana, native finished with 20+ points in her career.

On the night, Marquette out rebounded NJIT 46-26. Redshirt first-year forward Liza Karlen and Myles both combined for 21 rebounds on the night.

“”Just to have their motors on the glass, I thought that was the difference in the first half,” Duffy said. “We were cleaning up some misses and getting extra possessions and I think that’s how the lead initially grew pretty big just because of the effort on the glass.”

For Karlen, she finished with a career-high 10 boards while adding nine points, three assists and two steals.

“That’s definitely something I worked on a lot in (the) off-season and preseason,” Karlen said. “Just getting that positioning and making sure to box out every single time is something that as a post group stress. Rebounding is also really important to our team as a whole so just holding that mentality to crash every time.”

Marquette (2-0) will conclude their three-game home stand Monday when they face Southern at 12 pm CST at the Al McGuire Center.

“I want us to continue to get better defensively, I think there will be a lot of things for us to watch tonight and get ready for Southern on Monday,” Duffy said. A little bit for us is get the right amount of rest, we got a pretty long stretch here, so just making sure they are recovered, I know Southern will be ready on Monday” head coach Megan Duffy said.

This article was written by Kelly Reilly. She can be reached at kelly.reilly@marquette.edu or on Twitter @kellyreillyyy