REVIEW: ‘Red (Taylor’s Version)’ is something new but something we remember ‘All Too Well’ 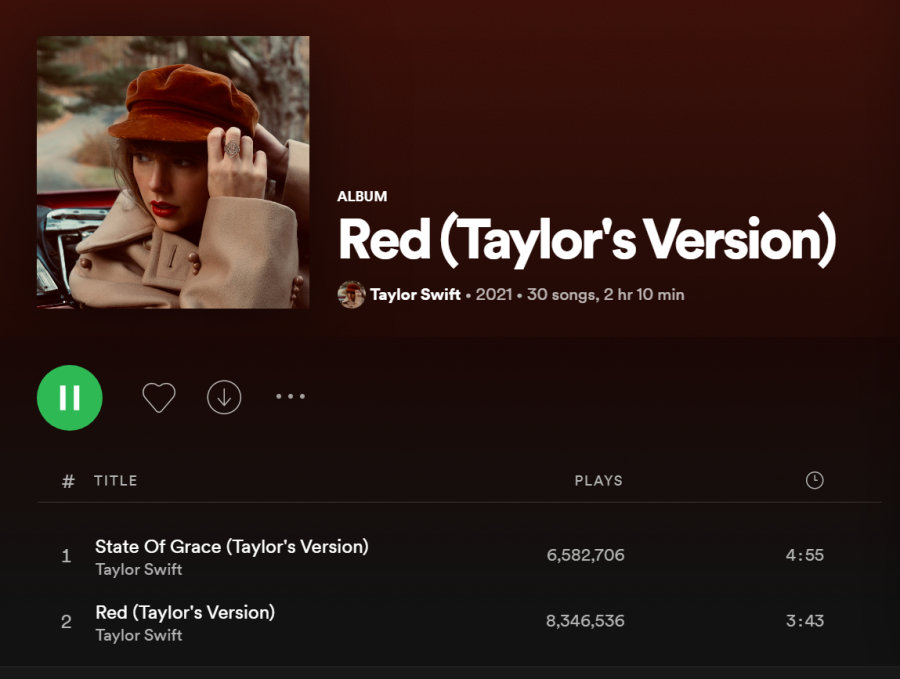 In 2012, alumni writer for the Marquette Tribune, Eva Sotomayor, wrote a somewhat negative review of Taylor Swift’s newest album titled “Swift’s heartbreak too much to handle on ‘Red’.” While at the time she believed everything she wrote in her review, Sotomayor has recently taken to Twitter to apologize for her original words.

“in honor of RED (Taylor’s Version) being released this week I wanna issue a formal apology for the negative album review I wrote for the @MU_Wire in 2012,” Sotomayor said in a Twitter post on Nov. 8.

Sotomayor continued the thread by including a picture of her Spotify Top Artists. Captioned “2012 vs. 2021” the photo revealed the number one artist spot to be claimed by Ms. Taylor Swift herself.

In light of the release of  “Red (Taylor’s Version),” let’s take a page out of Swift’s book and reach into the Marquette Wire “vault” and talk with Sotomayor about her thoughts on Taylor’s newest rerelease.

“She [has] somehow managed to make Taylor’s Version a 30-song no-skip album,” Sotomayor said in a Twitter direct message.

And I totally agree with that statement. Like many other 20-somethings, I found myself curled up in the fetal position at 11:30 p.m. Thursday night, hugging a pillow as tears welled up in my eyes listening to the 10-minute version of Swift’s “All Too Well.”

While there were plenty of tears shed during the two hours and eleven minutes that I listened to this album, I was smiling for the majority of that time, dancing around my room having my own personal listening party. “Red” has long been my favorite Taylor Swift album because of Swift’s robust storytelling and songwriting ability. I was excited to hear the changes she made for Taylor’s Version and to finally listen to the nine tracks from “The Vault” that had never been released.

Of those nine tracks, the one that stands out to me the most is “Message In A Bottle.” The song follows the same hypnotizing popish sound that was new to Taylor during the initial ‘Red’ era, and fits a similar mold to “Starlight,” “22,” and “I Knew You Were Trouble.”

But for all of the songs that were written about new beginnings in love and life, “Red (Taylor’s Version)” easily places listeners into a state of intense emotional distress that comes from the power of her lyrics as they deflect onto her audience, making Swift’s heartbreaks our own.

Enter “Come Back…Be Here” and “Better Man.” While there are plenty more examples of gut-wrenching bridges and melodies from this album’s tracklist, namely “All Too Well,” Swift does a particularly spectacular job of making listeners feel every word in these two songs, especially as she sings in “Come Back…Be Here,” “But you’re in London, and I break down / ‘Cause it’s not fair that you’re not around.”

The latter, “Better Man,” was originally penned by Taylor Swift, but may sound familiar as Grammy award-winning country band Little Big Town recorded and released the song in 2016. Swift’s version of the track sounds reminiscent of Little Big Town, but the words seem to have a greater pull as their original songwriter sings, “And it was always of your terms/ I waited on every careless word/ Hoping they might turn sweet again/ Like it was in the beginning.”

While she hasn’t listened to very many of “the vault” tracks, Sotomayor liked “Better Man.”

“I haven’t listened to the vault too much because I’ve been listening to the ‘old ones’ but I do really like ‘Better Man,'” Sotomayor said. “I can’t vibe with ‘Nothing New’ which is weird because it has Phoebe Bridgers and I like Phoebe a lot usually!”

Fans have speculated since the initial “Red” album that Swift’s relationship with actor Jake Gyllenhaal was this inspiration for a majority of the songs on the album. While we may never know if the rumors are true (much like we will never really know if Taylor left her scarf at his sister’s house), Twitter has once again become flush with criticisms and memes of the “Spider Man: Far From Home” star.

And those criticisms have maintained a steady stream with the release of the “All Too Well” short film that was directed and written by Swift. The song is one that is supposedly written about Gyllenhaal, and stars Dylan O’Brien and Sadie Sink in the lead roles. The short film is accompanied by the long-awaited 10-minute version of “All Too Well,” a song that keeps listeners enthralled from the first second to the last.

Sotomayor summarizes the effect of the song perfectly. “..It completely wrecked me but in the best way,” she said.

But I think there is something more behind the breakup songs that Taylor is known (almost infamous) for writing. Something that can be seen even clearer as the artist rerecords and rereleases the music from her formative years as a songwriter. “Red (Taylor’s Version)” shows, at least to me, how mature the 31 year-old has become, both in her personal life and lyrically.

“Red (Taylor’s Version)” is the second album in Swift’s discography to get the “(Taylor’s Version)” treatment. After and expensive legal battle with music manager Scooter Braun to regain the master recordings of her first six studio albums, Swift instead opted to rerecord her records and make them something new for fans to enjoy.

The release of “Fearless (Taylor’s Version)” in March 2021 and now “Red (Taylor’s Version),” offers pure nostalgia as they transport fans back to the first time they heard the albums and the stories and heartbreak enclosed in them. Now the songs and heartbreaking narratives carry new weight, a deeper understanding of how far Taylor Swift has come from the break-up songs of her youth and how she has grown through them.

Sotomayor pointed to Swift’s growth as an artist compared to the original recording of “Red” as one of the reasons why she enjoys the album in its new context. “I’m just so obsessed with her vocal on the tracks, I’ve never been happier to be wrong,” she said.

While I still prefer the original versions of Swift’s duet with Snow Patrol’s Gary Lightbody entitled “The Last Time,” and the leadoff track “State of Grace,” Taylor Swift delivers a nostalgic and powerful record. The new songs released from “the vault” are sure to become as classic as the original track list. The rerecordings have just as much, if not more, emotion and truth behind them. Swift’s voice has grown as much as she has, and for that reason, I believe that “Red (Taylor’s Version)” is better than the original.

I give “Red (Taylor’s Version)” a rating of 9.5 out of 10 stars. “Red,” “The Very First Night” and “Holy Ground” are a few personal favorites that listeners should check out.

And while many thought that “Red (Taylor’s Version)” and “All Too Well: The Short Film” was enough, Swift still isn’t done. The artist took to Instagram Sunday to tease the release of another music video, this time for vault track “I Bet You Think About Me,” featuring Chris Stapleton. The video is directed by Swift’s longtime friend, Blake Lively, making it her directorial debut. The video is set to premiere on YouTube Monday, Nov. 15 at 9 a.m.