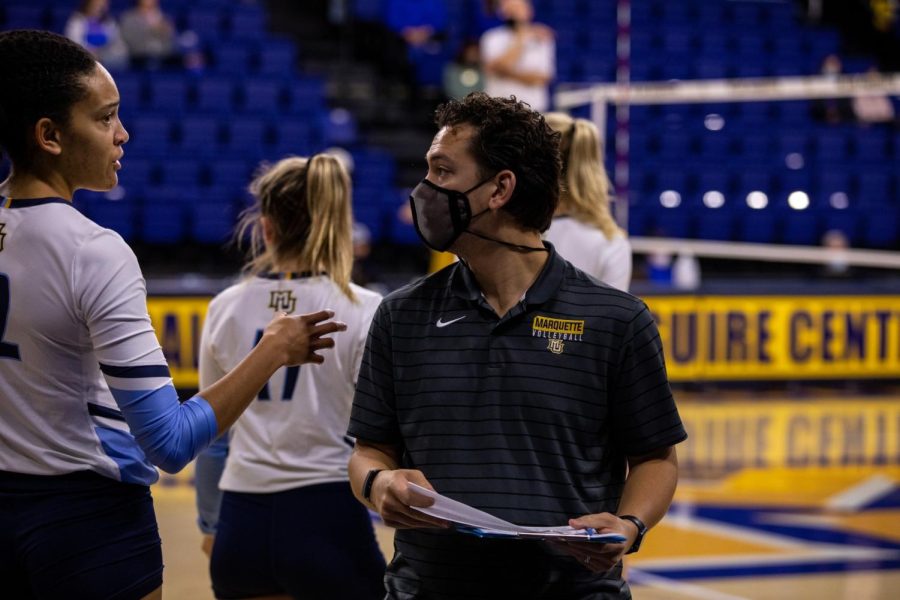 Splitting time as a coach at the Milwaukee Sting Volleyball Club and a volunteer assistant coach with the Marquette women’s volleyball team has been a challenge for coach Peter Netisingha, not being able to give all of his time to one team.

One thing that has made that challenge a little easier for coach Netisingha is that it feels like he’s been with the program for year, even in his first year.

“When you feel like you are already part of the program and you’re a week in, that’s a unique thing. It does not happen everywhere,” Netsinga said. “It’s not necessarily that it happens at the nicest or fanciest places or biggest places, it happens where there are good people.”

Even though this is Netisingha’s first year at Marquette, that doesn’t mean that there aren’t a few familiar faces.

Netisingha met head coach Ryan Theis back in 2008 while Theis was an assistant coach at the University of Florida. One of their first interactions was during a sand volleyball game in between camp sessions at Texas State, where things took an odd turn.

“He (Theis) got bit by a bug he’s allergic to, he couldn’t breath very well. He started getting a little sweaty, well sweatier than 100 degrees in Texas,” Netisingha said. “I did not stick him with the Epi-Pen but I was right there when we did and sent him to the hospital.”

Both would cross paths next in 2013, when Netisingha was a volunteer assistant coach and undergraduate student at the University of Wisconsin-Madison. It was at this time Netisingha said he was looking to get into coaching after graduating from Madison the year prior with a degree in sociology.

Theis said he was impressed with some of Netisingha’s abilities as a coach and brought him onto his staff at Ohio University.

“In terms of a volunteer assistant, student assistant, manager or assistant coach, the ability to control the ball, manipulate (it) and make your players better is a coaching gift,” Theis said.

Netisingha said he began to cultivate that “coaching gift” during his youth while growing up in Hinsdale, Illinois.

“Coaching came super natural to me because that’s what I did,” Netisingha said. “When I was 15 years old, they asked me to help work some camps at the club I played for. That was my summer job for the rest of my life, essentially.”

Before coming onto coach Theis’ staff in 2013, Netsingha played a year of volleyball at St. Ambrose University, before transferring to the University of Wisconsin-Madison to become a volunteer assistant coach for the Badgers from 2009-2011.

Netisingha would earn his Bachelor’s degree in sociology in 2012 while in Madison.

Following the 2013 season, both went their separate ways. Theis left Ohio to become the head coach at Marquette while Netisingha headed to the University of Nebraska to be a graduate assistant before becoming an assistant coach at Illinois State from 2016-2018.

Then after the 2018 season, Netisingha left the collegiate level as he and his wife moved to Milwaukee so she could finish her Ph.D in Kinesiology at the University of Wisconsin-Milwaukee.

Despite leaving the college coaching ranks, Netisingha found a new opportunity to coach with the Milwaukee Sting Volleyball Club.

It was with the local club that Netisingha met future Marquette first-year defensive specialist Samantha Naber.

Naber said she first met Netisingha while trying out for the U16 Gold team.

She said in the time she played under Netisingha with Sting, she and her teammates loved playing for him.

“It was awesome. There’s a lot of ups and downs with coaches and many players like different coaching styles, but everyone on our team loved playing for him,” Naber said. “Everyone was committed to what he was doing, what he was saying and so I thought that really brought our team together.”

Then this past summer, Netisingha and Theis would rejoin forces on the bench as he joined the Golden Eagles.

Naber said she was hoping as the process was playing out that her former club coach would be joining her at college.

“The whole time I was like ‘Is it going to happen? Are you gonna come?’ and for a while it was kind of iffy,” Naber said. “I was on him ‘You’re coming, you’re gonna make this work’ and so when he did it was pretty cool because I knew that if I had any concerns, any questions or wasn’t quite comfortable with the new coaching staff, I had him.”

Naber said one of the things she expected from Netisingha was his energy.

During their time with Sting, Naber said that after a win, Netisingha would allow them to show their excitement in a unique way.

“After big games, we would always do something,” Naber said. “If we won, we would look into each other’s eyes and just scream our heads off. It was so cool because everyone was involved.”

Naber said that Netisinga is expressive on the bench and she loves that he matches their energy.

“He’s in it with us and he shows that emotion,” Naber said. “I love that he’s helping us get energy and is bringing energy. Some coaches they like to stay level; I like that they are in it with us.”

Theis said Netisingha’s energy is seen in games and practices.

“He’s animated, he gets into it, he’ll throw out the obligatory ‘Let’s go’ and the fist pumps and the high fives,” Theis said. “It’s wonderful, it’s terrific. It is not my style but that’s on purpose so to have staff doing that stuff is great.”

Netisingha said being an energetic person has always been a part of him.

“I’d like to say it’s something that I worked really hard at, but I think it’s part of who I am,” Netisingha said. “I enjoy it, I build off the enthusiasm the players have when they do something well or have been working on it. There’s not a much better feeling than that and I think it’s the same for them.”

Plans for the Future

Beyond this season, Netisingha said he is hoping to continue coaching, whether it be at Marquette or elsewhere.

“If I am at Marquette, then I will know that I have done something right and if I’m not, then I think I’ll land on my feet somewhere else: Be it a college assistant coaching job, in the future maybe head coach somewhere,” Netisingha said. “And I’m not opposed to any level of coaching, I think it’s a great privilege to impart knowledge and mentor and be a leader and I think you can learn so much from doing that.”