Rashad’s Records: After two years, Summer Walker is ‘Still Over It’ with new album 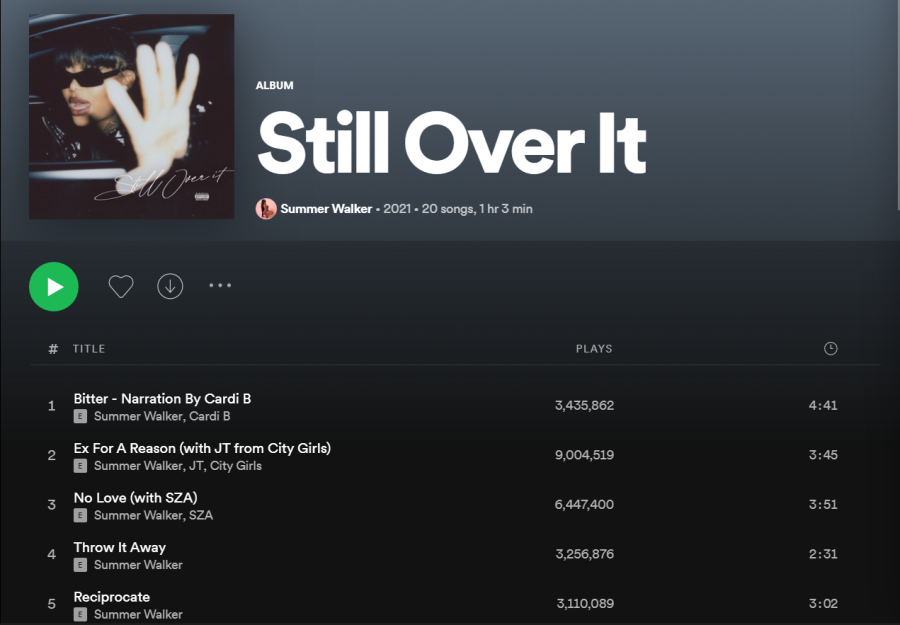 I remember first hearing about Summer Walker when Drake hopped on the remix to her platinum single, “Girls Need Love” back in the winter of 2019. While I mainly checked the song out because I’m a huge Drake fan, I fell in love with Walker’s voice and the emotion she puts into it. The way she expresses her desire for intimacy and Drake responding to it made me want to keep an eye out on Walker in the future.

Later that year, she released her debut album, “Over It,” which featured a track titled “Stretch You Out,” that had one of my favorite artists, A Boogie – wit da Hoodie. When I first heard the song, I was of course excited to hear A Boogie’s verse, but it was Walker who blew me away. Her verse was so addicting to me, I would replay it when A Boogie’s part was about to start. After a few years of seeing her featured on different songs like  “Secret” with 21 Savage and “Love Cycle” with Toosii,  I was excited to see she was returning with her sophomore studio album.

“Still Over It” brings listeners a little closer look at Walker and her relationship with the father of her child, producer London On Da Track, which became very messy on social media. We see this in the first song on the 20-track project, “Bitter,” which features narration by Cardi B. And one thing about Walker, she’s gonna get personal when it comes to her music. “But why these h**s all in our business? How he don’t care ’bout his children,” sings the Atlanta native. In a message she provided to Apple Music, Walker told fans to use her album as an “opportunity to learn from my mistakes.” And with the energy she’s directing toward London, she definitely wants people to avoid what she went through.

Walker’s new album has a lot of differences from her 2019 debut project. Something I noticed was how this project included more female features, with help from SZA, Cardi B, JT, Ciara and Ari Lennox. Her debut project only had one female feature, Jhene Aiko. I liked this touch because I feel like having an album about unfaithfulness and heartbreak from the female perspective needed some assistance from women who have made music about those same things, like SZA’s “CTRL” and Cardi B’s “Invasion of Privacy.” SZA’s verse on “No Love” was one of my favorite moments on the album, as she sings about her believing she deserves more from the person she is with. SZA and Walker on a song together was definitely much needed for the R&B world.

Another noticeable difference from this album compared to her first was the production. “Over It” was executive produced by London On Da Track. For obvious reasons, London wasn’t included on her new album. Despite production credits being given to London, Walker said he had no involvement. Regardless, the production on “Still Over It” felt a little boring to me. Her first album had a great variety of beats with good samples to go along with it. This album, though, featured a lot of slow beats making a lot of the songs sound the same. While I get that’s the whole vibe of the album, her first album still had a lot of diverse production, despite speaking on similar subjects. And I am not saying that Walker needs her ex to produce every song she makes, but she definitely needs to look into other producers, as songs like “Ex For A Reason” and “Dat Right There” shows how she can perform well on a more fast-paced beat.

Summer Walker’s new album definitely has its flaws, but it’s still a memorable album. It had the biggest 24-hour debut for a female artist in Apple Music history, while also having the biggest debut for an R&B album on the music streaming service. The R&B genre has been overcome with a lot of great female artists in recent times, like Jhene Aiko, SZA, H.E.R. and Walker is without a doubt on that list. Her new album had social media going nuts and will for sure start some arguments within intimate relationships.  And regardless of how her personal life can sometimes overshadow her musical life, Walker is a rising superstar and will be keeping R&B in good hands for years to come.