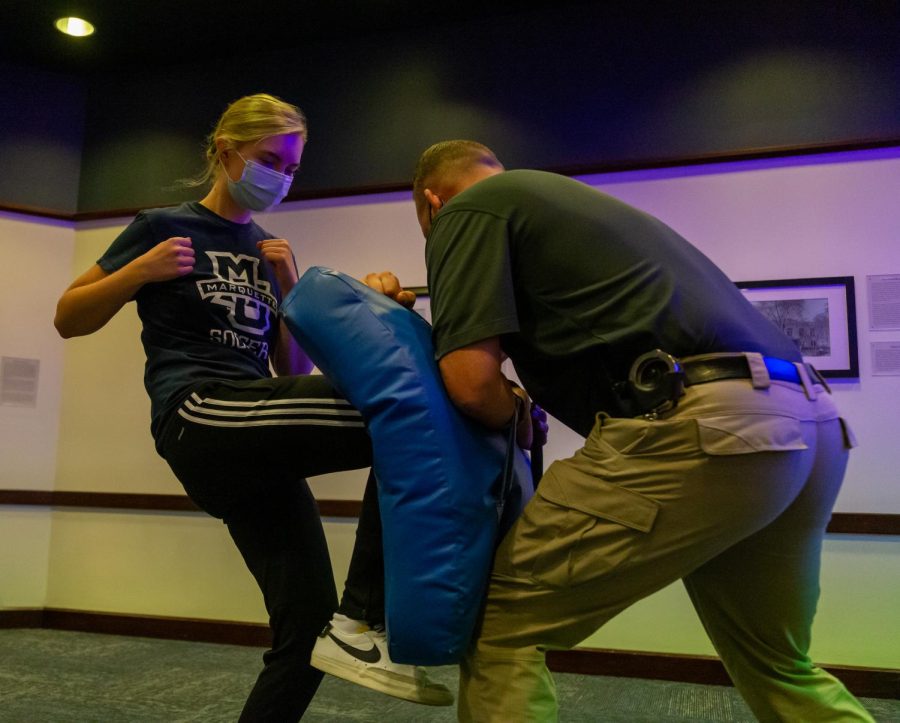 Self-defense classes are being hosted inside the Alumni Memorial Union.

As crimes on campus increase, The Marquette Police Department has taken it into their own hands to help students and faculty learn how to properly defend themselves.

Recently, there has been a spike in carjackings, robberies, and other dangerous situations occurring on campus, raising concerns for several Marquette students, faculty, and staff as they find ways to prepare themselves in case of encountering a foul situation.

“I think it’s important to be prepared for situations that we hope to avoid, and this could be one way to do that,” said Hannah Ray, a junior in the College of Health Sciences, said.

The Marquette Police Department is offering self-defense classes to everyone interested at the Alumni Memorial Union on various dates along throughout the school year. The dates can be found on Marquette’s website.

“While MUPD has a strong presence in the campus community, we realize we can’t be everywhere at all times. Students, faculty, and staff could find themselves in a situation, both on or off-campus, that requires taking action to keep safe,” said Jeff Kranz, assistant chief of police for MUPD, said.

The classes, held in small groups, begin with a prompt presentation on the police department’s services and suggestions on what to do if a bad situation comes to worse.

The presentation includes an explanation of MUPD’s different safety programs, including the Blue Light System, the Limo Services, the Eagle Eye app, and other initiatives they have introduced to limit crime. Additionally, there were MUPD offered tips on how to deescalate a dangerous situation. There was an emphasis on understanding your one’s natural response to danger — commonly known as your “Flight, Fight or Freeze Response” and how to keep calm to dissuade yourself from feeding into them.

MUPD does acknowledge that some situations can escalate no matter what one tries to do, so the second portion of the class consists of a hands-on approach. It focuses on different self-defense techniques to effectively escape a dangerous situation.
These techniques are designed with different ability sets in mind, ensuring the defensive techniques taught are the most beneficial for all participants.

“I feel like the class taught me what to do in moments I wouldn’t be able to think about what to do. They [MUPD] did an awesome job of showing us what to avoid when things go left. I especially liked how interactive the whole thing was, and how we were able to practice safely but effectively. I recommend the class to anyone interested,” said Steph Hernandez, a first-year in the College of Arts & Sciences, said. who just moved to Milwaukee.

“We hope to give people some self-defense tools to get out of a dangerous situation if one was to present itself. These tools, coupled with situational awareness, can help a person get to safety when needed,” Kranz said in an email.

Although Marquette’s police department was officially commissioned on May 1, 2015, the initiative started back when MUPD fell into the Campus Safety Department and was not recognized as an established police branch.

“The self-defense classes have been offered since I started at Marquette in 2014 and I know they were around well before me,” Kranz said in an email.

This story was written by Clara Lebron. She can be reached at clara.lebron@marquette.edu