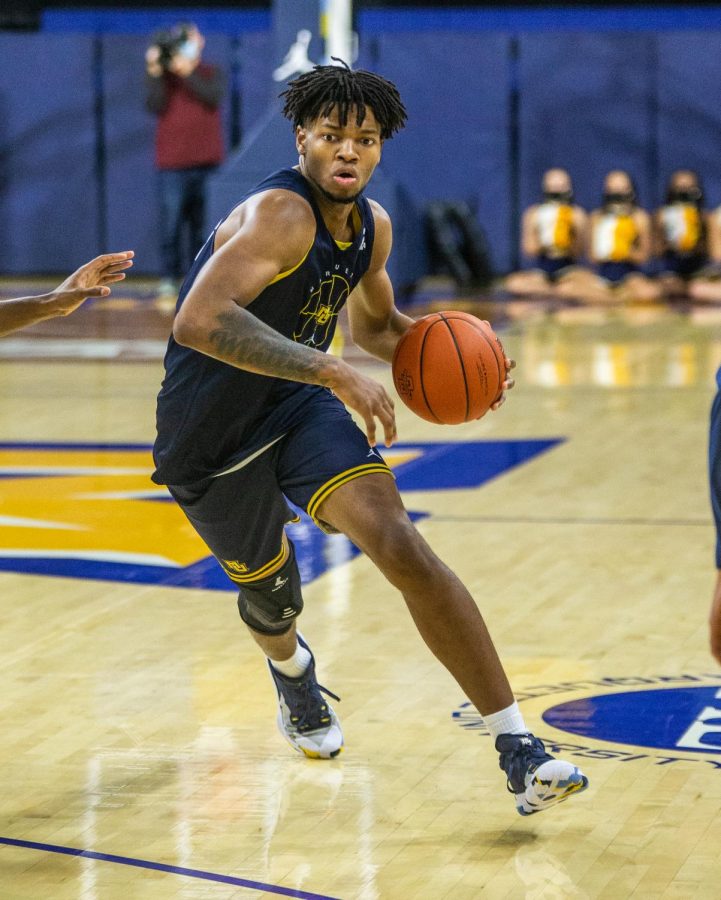 With Marquette’s decision to let go of former head coach Steve Wojciechowski and hand the reigns to Shaka Smart came almost an entire new roster of players and coaches for this upcoming season compared to last.

For Smart’s first season in Milwaukee, he will have multiple players that were already committed to him before he even considered leaving Texas and taking the Marquette job.

First-year forwards David Joplin and Keeyan Itejere as well as first-year guard Emarion Ellis were all committed to and signed to Texas, where they would have played under Smart for the Longhorns.

Smart was officially hired by Marquette on March 26 and within three weeks, Itejere, Ellis and Joplin had requested for their release from Texas and committed to follow Smart to Marquette.

“Making the switch from Texas to Marquette wasn’t hard at all,” Itejere said. “I didn’t really have to give it much thought. I just knew that Coach Smart was someone I needed in college.”

Smart announced following the team’s 98-40 exhibition win against Bowie State Nov. 4, Itejere will be redshirting this season in order to train and prepare for 2022-23.

He said in April that Itejere will impact the game with his ability to move at his size.

“Keeyan can really defend, block shots and run the floor. I don’t know if I’ve seen that many guys with his size that can move that way laterally,” Smart said.

Smart did add that Itejere was “thin” and that the first thing they did when Itejere decided to sign with Marquette was get him on Zoom calls with Todd Smith, the director of sports performance for both men’s basketball and men’s lacrosse at Marquette.

“I fully understand the plans that coach has for me in terms of what I can do for him,” Itejere said. “The decision to redshirt was based on how much I could grow this year and become the best version of me for next year.”

The other forward in this group who flipped his commitment to follow Smart is Joplin, who will get to play in his home state.

Joplin, who hails from Brookfield, Wisconsin, went to Brookfield Central High School which is under 15 miles West from Marquette’s campus. Smart himself is a native of Wisconsin as well, growing up just outside of Madison in Oregon, Wisconsin.

For Joplin, the decision to stick with Smart and stay home was an easy one.

“We built that trust and I didn’t want to play for anybody else, it was a no brainer for me,” Joplin said. “I was committed to Coach Smart. It was basically the same thing playing for him here as it would’ve been in Texas, it’s just now I’m in my hometown.”

Trust was also something Smart brought up in April when talking about his relationship with Joplin.

“(Joplin) trusts me and I trust him. He knows that I believe in him,” Smart said. “He’s a guy that can put the ball in the basket and score in a lot of different ways. If he gets into elite shape, he’s really going to take off.”

The 6-foot-7 forward averaged 25.6 points and 10.2 rebounds a game in his senior year of high school, earning him a unanimous vote onto the Associated Press All-State Team in Wisconsin.

Joplin said Smart and the rest of the coaching staff has encouraged him to be a score-first kind of player.

“Shooting is my game now, it’s what I do. They tell me to guard somebody and shoot the ball,” Joplin said. “They’ve instilled in me that they brought me here to score and to have that killer mentality in the paint and behind the three point line.”

Joplin said outside of the game-plan for him to be a primary scorer and play in his hometown, the relationships he’s built with the entire coaching staff were what made the choice to come to Marquette an easy one.

“Anywhere you play at a high level there’s gonna be a great atmosphere and great facilities, so it’s really just about the relationships you build,” Joplin said. “It’s about who do you trust and who puts you in the best position to succeed and the coaching staff here believes strongly in me.”

Another player that Smart is trying to put in a position to succeed is Emarion Ellis, a 6-foot-5 guard out of Davenport, Iowa.

Ellis was a four-star recruit coming out of high school and was ranked as the 91st best prospect in his class in the nation by Rivals.com.

“With Emarion, you guys are seeing literally a baby deer,” Smart said. “When he grows up he’s going to be something else, but he’s just not there yet.”

Smart added that he doesn’t have all the control over how quickly a player like Emarion gets into his best form. However, right now there is a little bit of sloppiness, which he said is normal for a young guard like Ellis.

Ellis is in a competition for minutes with the other guards on the team, including two other first-years in Kam Jones and Stevie Mitchell.

He said that the coaches have worked him and his new teammates hard in preparation for the season.

“If you’re not running hard enough or playing defense hard enough, there’s a tire in the corner at practice that you have to push up and down,” Ellis said. “It’s all about playing hard.”

In the first few months of their experience playing under Smart, the 44-year-old head coach has made his ideals and his identity as a coach known in practices.

“His excitement, enthusiasm and passion for the game, you can see it in practices,” Itjere said. “It really gets me excited and I know that he wants the best for everyone.”

Itejere said what makes him also excited is the game plan that Smart has for him, as he mentioned Smart makes it clear with each player the type of expectations he has for them and how they fit into his plan.

“For me, he likes to implement a lot of fast pace stuff and he likes versatile, speedy big men and I feel like that’s what I do,” Itejere said. “I’m an athletic big man and I can just see myself getting boards, going out on the break and dunking the ball.”

While Marquette fans won’t get to see Itejere’s athletic frame at his size on the court this season, Joplin and Ellis are both expected to play key roles in their first years.

Smart said he is excited about what all three players are going to bring to the program.

“I appreciate the loyalty of all the guys that had signed with us previously and decided to sign with us here,” Smart said. “Those guys had opportunities to go elsewhere, and their belief in us remained strong.”

This article was written by Matthew Yeazel. He can be reached at matthew.yeazel@marquette.edu or on Twitter @MJYeazel.