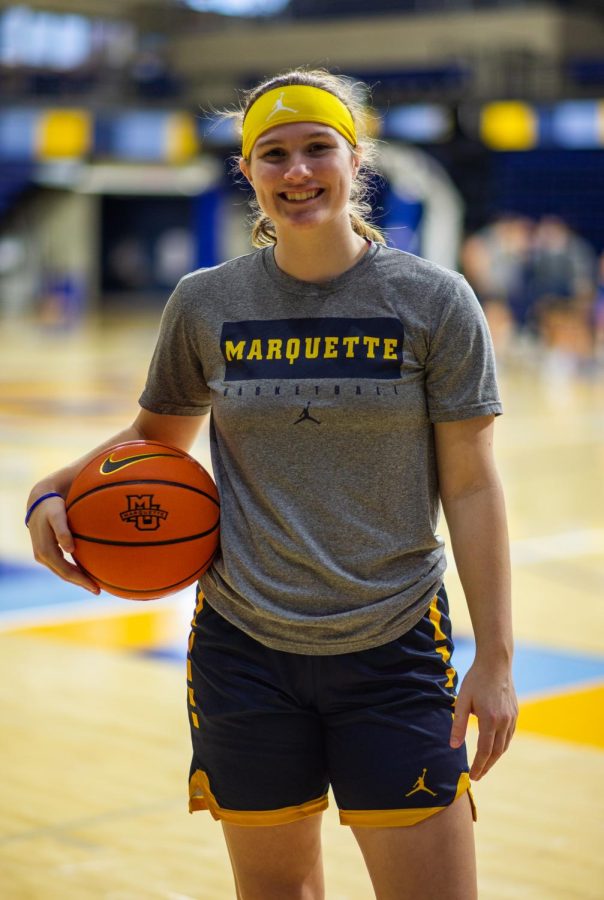 With the weather cooling down and leaves falling from the trees, it can mean one thing: a new chapter and new season of Marquette women’s basketball is ready to start up.

For redshirt sophomore guard Claire Kaifes, it is an opportunity to showcase more of her skills.

Kaifes, who hails from Shawnee, Kansas, has been a durable option off the bench the last two seasons for head coach Megan Duffy. But as she enters her first season as an upper-level player on the team, she said she wants to prove more.

“Before I was a bit more of a watcher, I would watch the upperclassman and really learn from them,” Kaifes said. “But now that I am an upperclassman, I need to take more responsibility and leadership and be there when my team needs me.”

Duffy announced at the team’s media day Oct. 27 that Kaifes will open the 2021-22 season on the sideline as she still recovers from her ACL injury this past spring.

While this doesn’t allow Kaifes to show her skills and lead on the court, she said it allows her to show what she can do off it instead; lead.

“I am a really big energy giver,” Kaifes said. “Being a leader you can lead many different things. (By) bringing lots of energy every single day, they can learn from me and (is something) I can continue doing for our team. I try to lead through touches and if anyone does any positive reps just being there for them and if someone is having a bad day, just being there for them and really carrying it if they’re losing it.”

Duffy said despite Kaifes’ injury, she has seen her leadership grow on the team.

“What’s incredible about Claire even though she is not on the floor is her leadership,” Duffy said. “Helping her younger teammates know ur offense, pulling players aside. This will be her role for right now. When she is back, she is a great shooter and she understands the game.”

Kaifes said over the last two years she has been able to learn a lot under Duffy, who was a former guard herself at Notre Dame and in the WNBA.

She said out of all the lessons learned, one has stuck with her over the others: E+R=O

By our way, Kaifes means things that are going right or correctly.

Though this season will be her first with the Golden Eagles, assistant coach Kelly Komara said she can see Kaifes bringing energy off the bench.

“Claire is always engaged at practices, pumping up her teammates and being a good teammate,” Komara said. “Claire is also very competitive, she is a winner, she wants to win and will do whatever it takes to win. Anytime there’s a good play or a teammate does something really well, Claire is always there to pump them up and get them excited.”

When a player does something wrong Kaifes is there to encourage and have positive energy for a teammate that may not do something correct.

Komara said she sees this as well from the sidelines.

“One of the things Claire talks about when things aren’t going well for her teammates is don’t hang your head,” Komara said. “(She) encourages them not to dwell on the past, to get back out there and make a good play next time.”

Kaifes said while it is hard for her to compete for a larger role on the team, she knows what she needs to do once she gets cleared and healed.

“Being someone steady that coach can rely on, fitting for my teammates and working well off of them,” Kaifes said.

But for now, Kaifes said she will be ready when her number is called and is ready to fulfil any role needed by her coaches and team.

“Starting on the bench isn’t a big deal, whatever the team needs me to do I can do that,” Kaifes said. “For me to become a starter, (I) just (need to) be more consistent and be more confident in myself.”