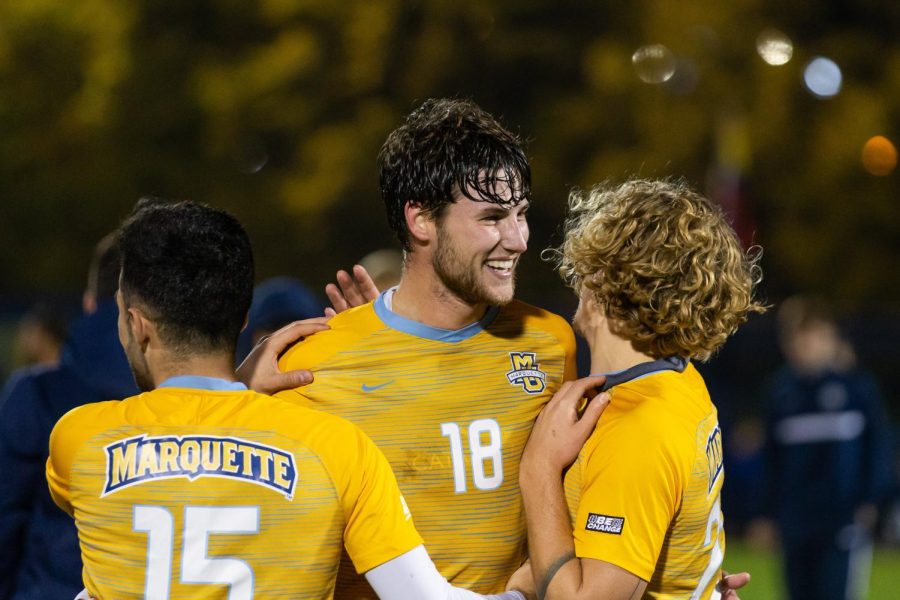 Despite finishing the BIG EAST regular season with a 4-5-1 record and a season with plenty of highs and lows, the Marquette men’s soccer team is still holding onto hope that their season will continue come playoff time.

After recording a total of 13 points in 10 conference games, the Golden Eagles currently stand tied for fourth place in the BIG EAST standings, which would be good enough to advance to postseason contention as the BIG EAST tournament takes the top six squads in the conference.

Unlike most teams in the BIG EAST, Marquette’s season ended early. While the Golden Eagles earned three critical points from their 1-0 win over No. 1 Georgetown Saturday night, the team has to wait out to see about their postseason fate with Providence and Creighton set to square up Wednesday Nov. 3.

“If we would’ve tied (against Georgetown) our chances of making the tournament would be a lot slimmer and now we just have to wait on a couple of games,” Marquette men’s soccer head coach Louis Bennett said. “It is what it is, but what a way to send our seniors out on a night like this.”

Saturday night’s victory over the Hoyas was the Golden Eagles first victory over a top-ranked team in the country in program history.

Redshirt sophomore forward AJ Franklin provided the game-winner in the 86th minute to keep hopes of continuing a season alive for Marquette.

“This one (goal) was hugely important because it gives us a lifeline and takes us a little bit closer to the goal, which was to get to the tournament and then to do well in the tournament,” Bennett told the Marquette Wire following the 1-0 win on Saturday.

Franklin’s third-career goal in a Marquette uniform proved to be beneficial for the team, which has been a common theme when the Schaumburg, Illinois, native scores over the years. Franklin’s first-career goal came last season in the team’s Sweet 16 matchup against Indiana.

“Our confidence is obviously through the roof right now, but we have to stay humble and look forward to the next week,” Franklin said. “We did our part and we got to have other teams do their part.”

Marquette’s upset bid wouldn’t come that easily, however. In the 87th minute, redshirt junior goalkeeper Chandler Hallwood was forced to save a penalty kick to secure all three points and the teams playoff hopes to live another day.

Hallwood’s memorable night saw the goalkeeper set a new career-high with nine saves while making arguably one of the biggest saves of his career in the process.

“After this game everyone’s feeling confident, we feel like we can beat anyone,” Hallwood said. “I mean, they’re the best team in the country and we’ve just took them down and shut them out. I feel like whoever we face if we get there, we’ll be prepared.”

The Golden Eagles’ historic win capped off what was mostly an up-and-down season for a team that returned all but one starter from last season’s squad that reached the Sweet 16 of the NCAA tournament.

Marquette’s upset at Valley Fields on Senior Night further solidifies that there are no easy wins in the BIG EAST, something that Bennett has reiterated throughout the season.

“I said it in the beginning of the year, that I believed this team could beat any team on our schedule and that included Georgetown,” Bennett said.

With the win, Marquette is now in a three-way tie for fourth place in the BIG EAST with Butler, Creighton and Villanova. The Golden Eagles own the tiebreaker with the Blue Jays thanks to their 3-1 victory in Omaha Oct. 9.

Although Marquette has the advantage with Creighton, the Blue Jays have a chance to advance to the BIG EAST Tournament themselves on Wednesday against Providence.

Wednesday’s matchup between Providence and Creighton has huge implications for the Friars as well. With a win over Creighton, it gives Providence a first-round bye in the tournament, while a loss and a St. John’s win against Butler would result in the Red Storm receiving the first-round bye.

Additionally, a Providence victory Wednesday and a DePaul draw or loss against Xavier would advance Marquette to the BIG EAST Tournament for the fourth straight season.

Kickoff between the Friars and Blue Jays is set for 7 p.m. CST in Omaha Wednesday Nov.3. Until then, Marquette must patiently wait to see if they’ll have another chance of playing on the pitch again this season.

“We got to stay humble. We still got to look forward to the next week,” Franklin said. “We still got to practice hard this week and wait for the next game. We did our part and we got to have other teams do their part.”