Marquette upsets No. 1 team in nation on senior night 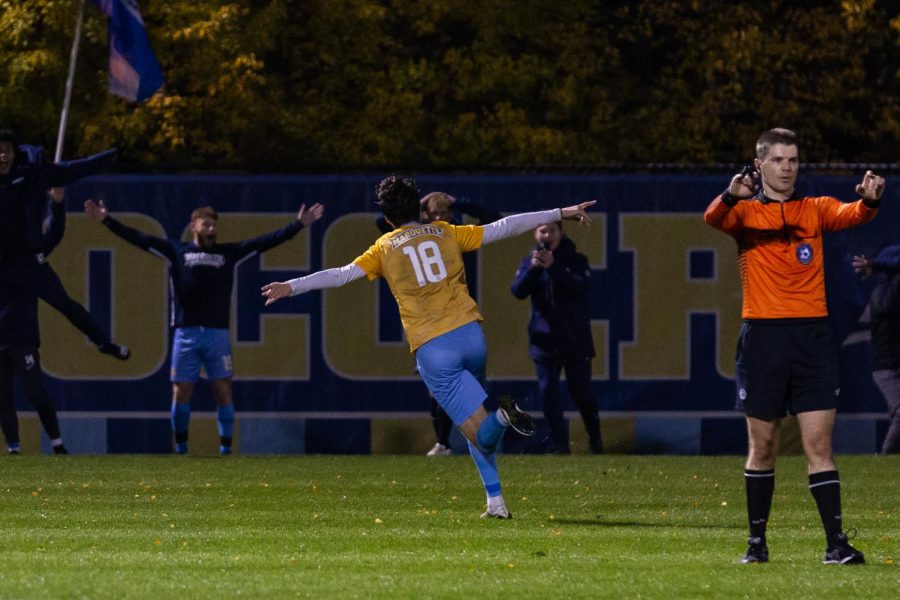 AJ Franklin (18) celebrates after his goal in the 86th minute in Marquette's 1-0 upset over No. 1 Georgetown Oct. 29. (Photo courtesy of Marquette Athletics.)

For the first time in program history, the Golden Eagles defeated the No. 1 overall team in the country defeating No. 1 Georgetown 1-0.

“They’re the best team in the country, very well coached, well disciplined, really a gold standard in college soccer,” Marquette men’s soccer head coach Louis Bennett said. “I said before the year though that this team could beat anyone in the country and that included Georgetown on our schedule. Thought Chandler (Hallwood) was a big factor for us.”

“It was a team effort,” Marquette redshirt sophomore forward AJ Franklin said. “When we finally got the breakthrough to go up 1-0, it was just a big celebration in the corner of all our hard work.”

Prior to the win, men’s soccer was 0-2 against the top ranked team in the nation with those losses coming against Creighton in 2015 and Notre Dame in 2014.

Saturday’s win snapped a two-game losing skid for the Golden Eagles and handed the Hoyas just their second loss of the season.

Both teams defenses put on strong defensive showing through the first 85 minutes, keeping the match scoreless.

In the 86th minute, redshirt junior midfielder Zyan Andrade crossed the ball to the right side of the pitch after moving the ball through the middle while in transition. Then redshirt sophomore forward AJ Franklin fired a one touch pass from the top of the 18-yard box to the back of the net to give Marquette the 1-0 lead.

“It was a good break and a great ball by Zyan (Andrade),” Franklin said. “Got me on a one-on-one on the inside of my left foot and I just hit it as hard as I could.”

For Franklin, this was his second goal of the season and third of his career.

Bennett said that Franklin was in the perfect position to give his team an opportunity to score.

“We’ve been encouraging AJ to get inside and attack. He’s got a great left foot and that goal gave us a lifeline,” Bennett said. “AJ doesn’t score ordinary goals, he just scores spectacular goals. That’s three goals in his career and they’ve all been fantastic goals.”

The Hoyas had a chance to find the equalizer in the 87th minute when they were awarded a penalty kick inside the box. However, Marquette redshirt junior goalkeeper Chandler Hallwood came up with a pair of saves to secure the upset.

“It was a rush of emotions,” Hallwood said. “As soon as he jumped down, I didn’t know what to do really. I just myself relaxed, settled the nerves and just do what I do.”

Hallwood finished the night with nine saves for the Marquette, including three during the Hoyas penalty kick in the 87th minute.

“It was just another game to me and I like being busy,” Hallwood said. “I don’t standing there not doing stuff. I like to always be active.”

This is now the third clean sheet of the season for Hallwood and the Golden Eagles. Additionally, it is the second consecutive clean sheet at Valley Fields to close out the regular season.

“When Chandler was asked to do some extraordinary things tonight, he did just that,”  Bennett said. “He stayed focused and continued to believe in himself and he came up with three remarkable saves to keep the lead.”

With Marquette’s upset over Georgetown, it keeps postseason hopes alive for the Golden Eagles. If Creighton loses to Providence on Wednesday, then the Golden Eagles will make the BIG EAST Tournament.

“Our confidence is through the roof right now.” Franklin said. “We know we need to stay humble but we did our part, now the other teams need to do their part and we’ll have a chance.”

While Marquette has to wait to find out their postseason fate, the memory of beating the No. 1 team in the country at home on senior night will remain with the team forever.

“This win shows how strong we are as a group,” Hallwood said. “We all wanted to come together for the seniors and win this one tonight and that’s exactly what we did.”

Meanwhile for Bennett, he said he is proud of this group of seniors and the team as a whole in how they handled business while creating a moment of this sorts.

“We knew this would be an emotional day and we had to keep that in check, but what a way to send our seniors out,” Bennett said. “The fact that we get to send a senior class off with that memory is fabulous.”