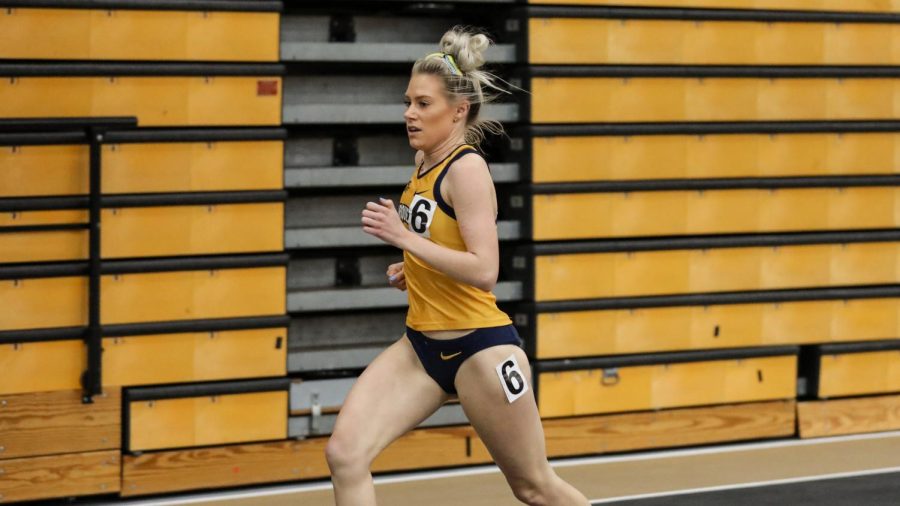 For many student-athletes, returning to their alma mater after graduating is not common as some go pro while others head into their respective working force. But that was not the path former Marquette cross country and now assistant coach Mary Hanson followed.

Hanson, who had an illustrious career with the Golden Eagles, is back in Milwaukee for more after graduating last spring.

However, it is not to continue running through various courses throughout the Midwest, but instead coaching from the sideline as she joined head coach Sean Birren’s staff as an assistant coach this season.

Hanson transferred to Marquette from Indiana State University in 2016.

“It was definitely wonderful running for Marquette,” Hanson said. “After a rough freshman year in Indiana, I came onto Marquette’s team and it was an incredibly welcoming environment. I honestly felt like it was a new sense of community that I almost never really experienced before. It was a really great time. It continued with a lot of great experiences with the team.”

Hanson said the experiences she had during her time on the team served as a reason why she wanted to come back in her new role.

She further mentioned coaching has been a part of her DNA.

“I come from a family of coaches and teachers,” Hanson said. “My dad coaches, my mom’s whole family coaches so I feel like it was something that I expected to do at least in some capacity. I anticipated helping out in some capacity.”

Hanson said she learned a lot from Horst which has helped her in her transition to coaching at Marquette.

“Not to say that my transition was easy, especially with COVID-19, but it’s been really rewarding and super fulfilling to come back to Marquette knowing what I know now about coaching,” Hanson said. “Had I gone directly from being an athlete to being a coach at Marquette, that would have been interesting. Having that space to grow as a person has been helpful for me. The team has been helpful for me, and I hope I returned the favor in some capacity.”

Senior runner Kendal Pfrimmer, who ran alongside Hanson for two years and viewed her as a mentor, said Hanson’s coaching style has already had an effect on her and her teammates.

“Mary the athlete was extremely driven and talented. As a freshman, she was the runner that I wanted to be. So, it was huge to have her. She was a huge role model to me,” Pfrimmer said. “As an athlete, she was in it 100% in every race, every practice. She was an easy person to be around because she loved the sport.”

Pfrimmer said Hanson brings a concise manner and approach to the team.

“She teaches us everything she knows and puts it in us athletes,” Pfrimmer said. “Not too much has changed from her as an athlete to becoming a coach. She is doing a great job.”

Birren said Hanson is able to connect with first-year and sophomore athletes the same way she does with upper-level runners, who were teammates with her.

“We have such a tight-knit team, they know her history. She’s somebody they have grown to trust,” Birren said.

Birren said brings a lot to both the team and coaching staff as a whole.

“A young, strong female presence that the women can look up to,” Birren said. “For me personally, it’s a huge relief to have the help that is consistent and you can trust. From the perspective of the kids too, to know that there are enough people that care for them has been a huge blessing.”

With Hanson’s first season as an assistant coach almost completed, as the team has regionals coming up, she is in the process of receiving her master’s degree in clinical mental health counseling.

“After doing the year-long fellowship at Loyola, I made the decision to come to Grad School and help coach back at Marquette,” Hanson said. “It has been really one.”

This article was written by Johnnie Brooker. He can be reached at [email protected] or on Twitter @Brookerj21.