‘Peaking at the right time’ ahead of BIG EAST Championships 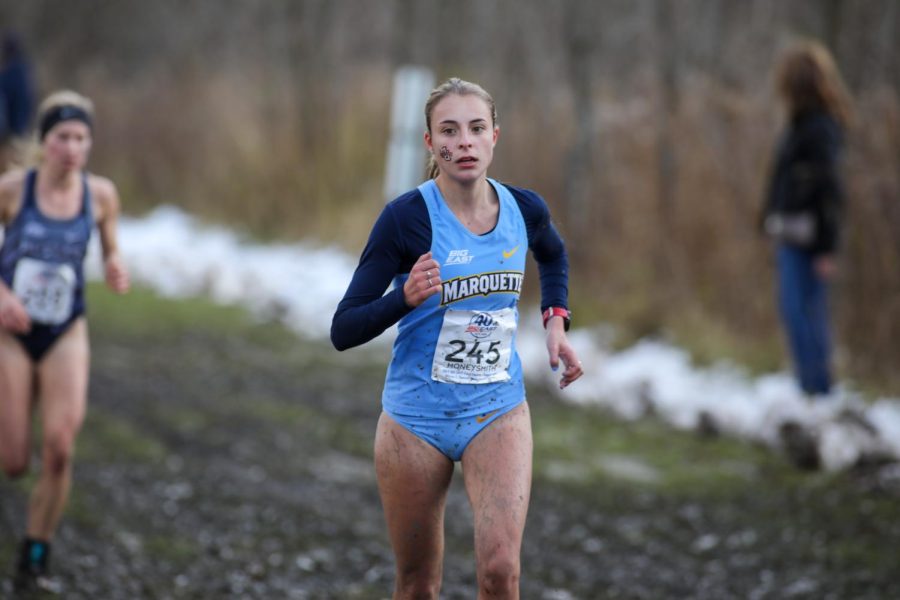 Racing an exhibition meet is one thing, but competing in a championship meet is another.

And for the Marquette cross country team, preparation is underway and anticipation of competing against the rest of the BIG EAST is building up ahead of this upcoming weekend conference championship meet at the Northview Church in Carmel, Indiana.

“Our team is definitely getting excited to race,” sophomore David Zeller said. “I think we’re peaking at the right time. The volume of our workouts is starting to go down and everybody is starting to feel really fit so this weekend should go really well.”

Junior Laurel Moneysmith said the women’s team is healthy and ready to compete in a race that counts.

“It’s really fun knowing that this meet is coming up,” Moneysmith said. “I mean overall, we are in really good shape, so it’s really fun to finally have a really big race that counts.”

Head coach Sean Birren said he is not taking this meet for granted, mentioning that he is thankful to have this opportunity with his team after not having it last year due to COVID-19.

Both the men’s and women’s teams have been producing quality times through their five meets thus this season.

And as Oct. 29 looms into the present, both squads know what they have to do to be successful.

“We need to move up, we had a great 1-5 split this past weekend,” Zeller said. “We need to move our pack up to be competitive because even though we are super close together if we are towards the middle of the race, that is not going to get us that far up in the team standings. We need to take a couple of seconds off the time and keep that pack tight in order to be successful.”

Moneysmith backs Zeller’s thoughts if Marquette wants to come out of the weekend victorious.

“We have to make sure that we are close to each other in the race. That is number one because it makes it a lot easier in a race when you see your teammates,”  Moneysmith said.

In cross country, the top five runners on an individual team are very essential. Where they place individually equates and adds up to the overall team score.

On the men’s side, the top five runners competing this weekend are sophomores David Zeller, Dan Weizorick and Patrick Hetlage, alongside senior Jordan Janusiak and graduate student Zak Kindl.

The top five runners on the women’s team have not been announced. For now, the team has been working out, resting, eating healthy and making sure they are in shape.

Birren mentioned that he has been preaching the importance of resting.

“Physically and logically, there is not much that we can get out of any real workout,” Birren said. “So, it is just a little bit of fine-tuning to keep our bodies moving toward something. We will do strides, then three rest days will follow, then its conference.”

As both teams are resting and tuning their engines, Zeller mentioned he is looking forward to facing rivals such as Villanova, Butler, Georgetown, Xavier, DePaul and Providence.

“I missed out on the Track and Field Outdoor Championships so I’m really excited to have a chance to race a lot of the guys out there,” Zeller said. “I’m friends with a lot of the guys in the BIG EAST too so it is going to be nice seeing them after the competition.”

Moneysmith said he is confident the team will be able to accomplish their goals at the meet.

“We will definitely go in ready to give it our best shot,” Moneysmith said.

Birren explained that the goal of this meet is to not win it, but more so where the team is going to place.

“We want our athletes to have better performances than they had all year. We want them to compete well as a team and compare that to past seasons. Having everybody compete well is the goal,” Birren said.

This article was written by Johnnie Brooker. He can be reached at johnnie.brooker@marquette.edu or on Twitter @BrookerJr21.