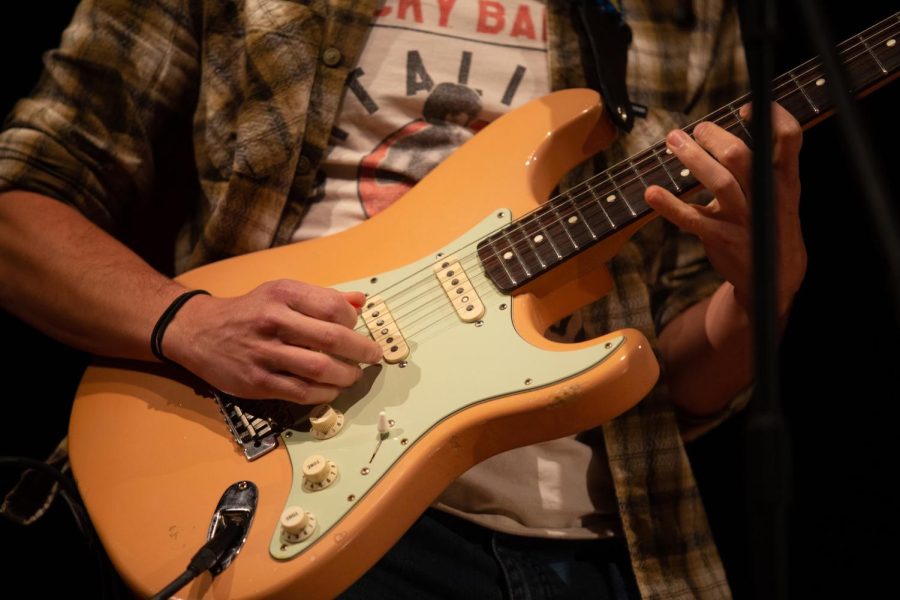 Ben Koshick, one of the guitarists for Tigera, shreds away to raise money for the Pablove Foundation.

Friday Oct. 15 Marquette Radio hosted their annual Rock-A-Thon concert in Weasler Auditorium, featuring all Milwaukee-based artists. The event partnered with The Pablove Foundation, a pediatric cancer nonprofit organization. The organization began for Pablo Castelaz, who died in 2009 at six years old from Wilms’ tumor, a rare form of childhood cancer. The Pablove Foundation focuses on providing kids with an outlet for creativity through art and science during their treatment. Jeff Castelaz, the co-founder of Pablove and Pablo’s dad, is a Marquette alum. The Pablove Foundation and Marquette Radio were thrilled to be back in person after a virtual Rock-A-Thon last year.

The night began with singer/songwriter Catelyn Picco, who started off with Phillip Phillip’s popular song “Home.” Picco’s impressive country-style vocals paired perfectly with her acoustic guitar fingerpicking. Her setlist was seemingly tailored for a college audience, as every cover left the crowd shouting the lyrics. From Taylor Swift’s “We Are Never Getting Back Together” to Dolly Parton’s “Jolene,” the audience did not stop dancing and singing along with Picco.

The peak of her performance was her mashup of “Castle on The Hill” by Ed Sheeran and the classic “Don’t Stop Believing” by Journey. Before playing her final song, Picco said she likes to finish her sets with the first song she ever learned because she “finds it ironic,” and “Ho Hey” by the Lumineers was a perfect tune to wrap up her strong performance.

Next up was Parker Schultz, who goes by “Social Cig.” His relaxed disposition eased the crowd as he asked, “What’s going on after this?” and “What bars are popping around here?” while tuning his guitar.

Social Cig opened with one of his hidden gems, “Camping Trip,” an upbeat tune with an incredibly catchy guitar riff. His song “Teenager,” which described the activities of a mischievous teenager, “forging my dad’s signature … egging houses,” resonated with many people in the crowd as they smiled and laughed along.

Social Cig’s interaction with the crowd was unmatched; he had conversations with the audience between songs and managed to bring a personal texture to his show. He asked the listeners if they cared if he played a cover, and proceeded to play “By and By” by Caamp, a song only a few in the crowd knew but was enjoyed by most. Before Social Cig’s final song, “Summer Downtime,” he thanked the crowd in such honest, heartfelt appreciation, saying, “It means a lot to me. I love you guys.”

To close out the night was Tigera, a pop/rock quintet. Just when it didn’t seem that the crowd could get rowdier, Tigera came out guns blazing with lead guitarist Ben Koshick’s powerful guitar riff into the toe-tapping anthem, “Just Like You.” Lead singer Devon Huckstep announced he saw some “chair dancing” in the audience.

Huckstep’s incredible vocal range was showcased in Tigera’s original jam, “Down To Business.” The quintet’s stage presence was electric, and they were simply bouncing off of each other all night. It felt like Tigera was just hanging out, jamming, being themselves, and everyone was just watching them.

As the band finished strong with “Mad For Me,” the crowd rose from their chairs and danced around the stage. Huckstep even jumped off the stage and danced with Catelyn Picco.

Needless to say, the night ended on a very high note. Marquette Radio’s annual Rock-A-Thon was a success for the audience, the bands and The Pablove Foundation.

This story was written by Clare Lindstrom. She can be reached at clare.lindstrom@marquette.edu