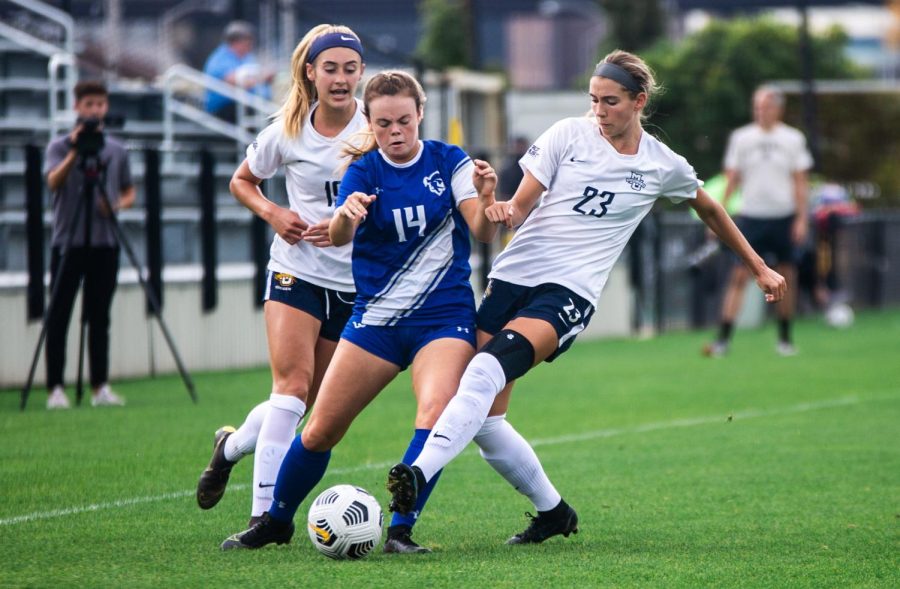 Coming off a 3-1 loss Sunday afternoon to Xavier, Marquette women’s soccer entered Thursday night looking to get back into the win column and hold their seeding in BIG EAST play.

However, No. 20 Georgetown had other plans, as the Hoyas defeated the Golden Eagles’ 1-0 at Valley Fields.

“As a coach all you can do is ask your team, when you give them a game plan, to be confident, to be aggressive, we’re not going to sit back and wait for a counter we’re gonna attack them even,” Marquette head coach Frank Pelaez said. “I think we gave them a little bit of a scare and I think anybody who walks on the valley fields from here on out knows that we’re going to come at them no matter. I’m really proud of them for being confident and that’s half the battle.”

Both teams came out of the gate with an aggressive, physical and attacking game plan.

Then 12 minutes later, Fernandez-Powell took another shot on goal but it sailed far left.

For the fourth time in their last five games, Marquette found itself in a deficit.

In the 30th minute, Hoyas sophomore (POSITION) Tatum Lenain broke free from a Golden Eagle defender at midfield who then sent the ball into the left corner for junior (POSITION) Gia Vicari. Then junior midfielder Julia Leas got a toe on the ball in front of the six-yard box where she struck the ball past Easter.

“It came in from the middle of the night, went out wide and then the girl took a 1-v-1 and then put it back in,” Pelaez said. “They’re very good at it. It is tough to eliminate all their scoring opportunities or their attacking opportunities. It was good 1-v-1 attacking I thought on their part so it’s something we work on when you’re going to get some of the best players in the country.”

Marquette would record its first shot of the half in the 33rd minute when first-year forward Maggie Starker sent one from the top left corner of the 18-yard box but it was saved by Georgetown junior goalkeeper Allie Augur.

In the 36th minute, Marquette graduate student defender Kylie Sprecher left the game with an injury following a collision with a Georgetown player. Sprecher would not return.

“Anytime you see anyone go down as a dad and as a coach, it just breaks my heart,” Pelaez said. ” But she’s a tough kid so she’ll bounce back.”

Despite Georgetown heading into halftime with a 1-0 lead, Pelaez said he was pleased with how his team played in the half.

“We had them on the ropes a little,” Pelaez said. “We were more on their half  trying to disrupt their play. They want to get into a flow and play very pretty soccer and they’re good at it. We are who we are we are blue collar going to run at you we’re going to play hard defense and we’re going to try to capitalize on opportunities we weren’t able to do that today.”

In the 72nd minute, Georgetown doubled their lead when senior midfielder Devon Lis placed on into the back of the net. First-year defender Cyanne Doyle and first-year forward Gia Vicari had the assist.

Both teams combined for 19 fouls on the night, each team had one player booked for a yellow card.

Easter finished with one save on the night while allowing two goals.

With Thursday night’s loss and how other games in the league went on the day, Marquette’s path to reaching the BIG EAST Tournament for the first time since 2017 has gotten tighter heading into the final week of competition. Currently the Golden Eagles are tied for sixth in the conference with DePaul.

Due to how Marquette’s schedule was set, the Golden Eagles have just one remaining game to play in the regular season while some other teams in the league have two remaining.

“I don’t know what postseason is going to look like,” Pelaez said. “To me, i’s can we do one game at a time, one practice at a time and I think they’ve improved every game.”

Marquette (8-8, 4-5 BIG EAST) will now have a full week to prepare for its next game Oct. 28 vs DePaul at Valley Fields for Senior Night.

“I think the DePaul game, they are now becoming homeowners,” Pelaez said. “And when your home’s in trouble and you really care about it, they’re now becoming that. Especially the upper class, so I feel good about it.”