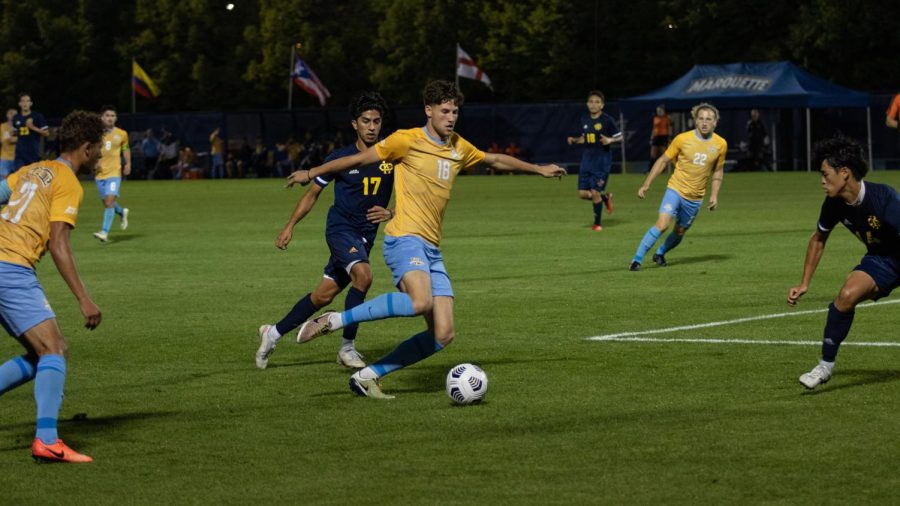 AJ Franklin (18) moves the ball up the field in Marquette's 1-0 loss to Villanova Sept. 13. (Photo courtesy of Marquette Athletics.)

Marquette men’s soccer traveled to Indianapolis, Indiana on Wednesday night for a matchup against the Butler Bulldogs and came away with a 2-1 loss in double overtime.

“I’ve never been more proud of our guys, the way they battled and the way they fought, and I’ve never been more upset in my career about a game,” Marquette head coach Louis Bennett said in a statement. “In the end, the massive amount of yellow cards and a red card still didn’t prevent us from battling, from getting back into the game and taking it into double overtime with a chance to win it. Before they scored, we had the best chance but their goalkeeper made a wonderful save. We’ve got a bunch of really upset guys who played their hearts out, and who deserve to have something from that game.”

Butler jumped out first in the sixth minute when junior forward Wilmer Cabrera Jr. potted his fourth goal of the season. Both junior forward Hemi Nassir and first-year midfielder Quint Breitkreuz were credited with the assist.

The Golden Eagles had opportunities to score in the first half but none found its way in the back of the net. Redshirt first-year forward Beto Soto had the best opportunity just before Butler scored.

Where Butler did have the advantage was in the foul department. The Golden Eagles committed 11 fouls in the half compared to just three for Butler.

Despite outshooting Butler in the first half six to five, Marquette went into halftime with a deficit.

Fouls continued to be a story as the night went on for both teams. In the 69th, redshirt junior midfielder Alan Salmeron was issued a red card, leaving the Golden Eagles a man down for the final 21 minutes of the match.

In the match as a whole, Butler had six yellow cards with Marquette having five plus the red card against Salmeron.

After trailing 1-0 for over 75 minutes, Marquette tied the match up at one on redshirt sophomore forward AJ Franklin’s first goal of the season in the 83rd minute. Soto was credited with the assist.

Marquette would head into its second overtime match of the season.

Despite both teams having several opportunities to score in the first overtime, neither scored sending it into double overtime.

In the 102nd minute, first-year midfielder netted home the winning goal for the Bulldogs from the top of the 18-yard box. It was the Hamburg, Germany, native’s first collegiate career goal. Redshirt sophomore midfielder Tommy Visser was credited with the assist.

With the loss, Marquette falls to sixth place in the BIG EAST. If the season ended today, Marquette would qualify for the BIG EAST Tournament. After tonight, the Golden Eagles have two remaining games in the regular season.