Marquette pulls off the comeback, beating DePaul in five sets 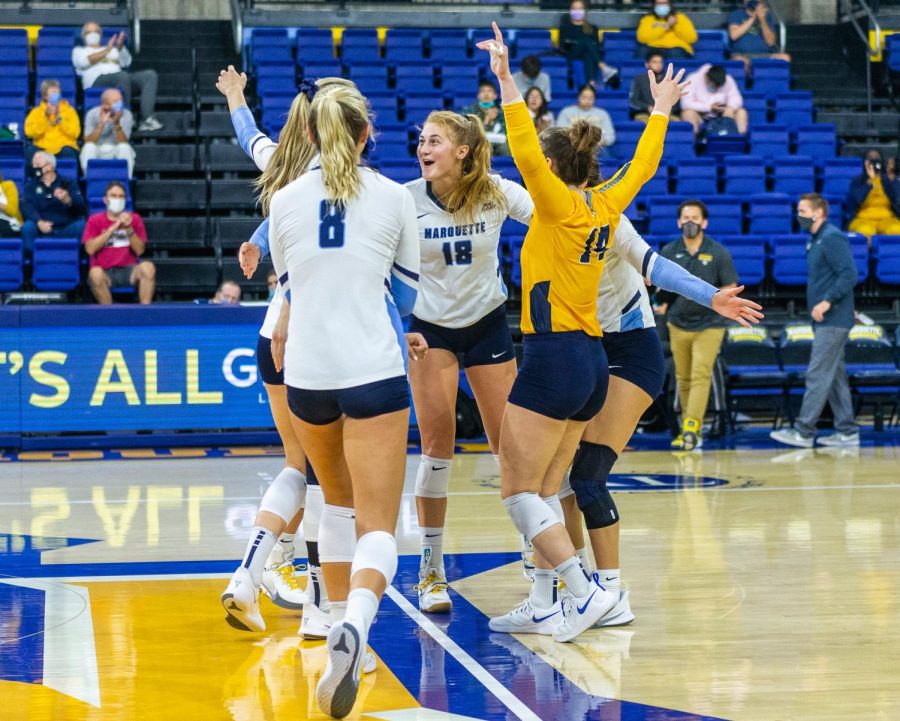 Marquette volleyball celebrates after a point in its five set victory against DePaul Oct. 20.

Marquette volleyball entered Wednesday’s matinee matchup with DePaul looking for their eighth BIG EAST win of the season and a sweep of their three-game homestand.

“It just shows what we can do and how we can play and we know what we needed to do… we just need to do it from the start,” graduate student Savannah Rennie said.

Unlike their season long trend, Marquette’s start in the match was not strong. In the first two sets, the Golden Eagles combined to hit .046% and totaled 21 attack errors.

“Setter-hitter gave away 15 points in the first two sets and then an easy ball. It was some of everything and it was sprinkled across (the first two sets). I think Savannah was positive hitting efficiency, Hope (Werch) was maybe positive but the rest was in the tank at that point, so it was good to come out of it,” Marquette head coach Ryan Theis said.

In the first set, the Blue Demons jumped out to a 9-2 run handing the Golden Eagles an early deficit. Marquette’s battle towards the end of the frame was not enough, as DePaul took two of the last five points in the set to win the frame.

Set two was slightly more contested as both teams traded blows and runs with each other.

After Marquette took a late 22-21 lead, DePaul used a 4-1 run, which included two attack errors from graduate student Hope Werch and redshirt sophomore Hannah Vanden Berg, to switch the momentum. As was the case in set one, senior Donna Brown ended the set with a kill to win it for the Blue Demons.

The third set featured more of a traditional look from the Golden Eagles. At one point in the frame, Marquette built their a lead as large as seven, which was their largest lead in the entire match. However, DePaul would not stop knocking on the door down the stretch.

The Blue Demons would get as close as three points down the stretch before Rennie would scored two of the last three points in the set both off kills to bring the Golden Eagles within one, two sets to one.

Set four was more of the same from set three for Marquette, closely battling with DePaul before generating a big run to start pulling away. An attack error from sophomore Jill Pressly gave Marquette set point to which Werch was able to complete and send the match into a fifth set.

Theis said though he changed up the rotations in both the third and fourth sets, he credits the overall play getting better in both sets to Marquette’s fight to bring themselves back into the match.

“In generality, just a lot of people started playing just a little bit better one play at time,” Theis said.

Set five was tight throughout, as both teams traded leads. Though DePaul earned match point when leading 14-11, an attack from senior Allison Dennermann blocked by graduate student Taylor Wolf forced the ball out of bounds and for DePaul to call a timeout.

Following the timeout, Rennie tied the match at 14 before striking back-to-back kills to win the match for the Golden Eagles.

“(I) felt really good, we had some really good setups and I knew I had to go in hard and if it wasn’t to me it was going to be to someone on a 1-on-1 and that’s what we needed,” Rennie said.

Werch set a new career high in kills with 20, while also contributing seven digs, two blocks and a service ace. Werch is now four aces away from tying the program record.

Wolf notched another triple-double on the season with 10 kills, 15 digs, and 36 assists.

“UConn is a handful and they’re really good at home, they’ve knocked off St. Johns and Creighton at home, so we’re gonna have our hands full,” Theis said.