Men’s basketball practices in front of fans with season looming 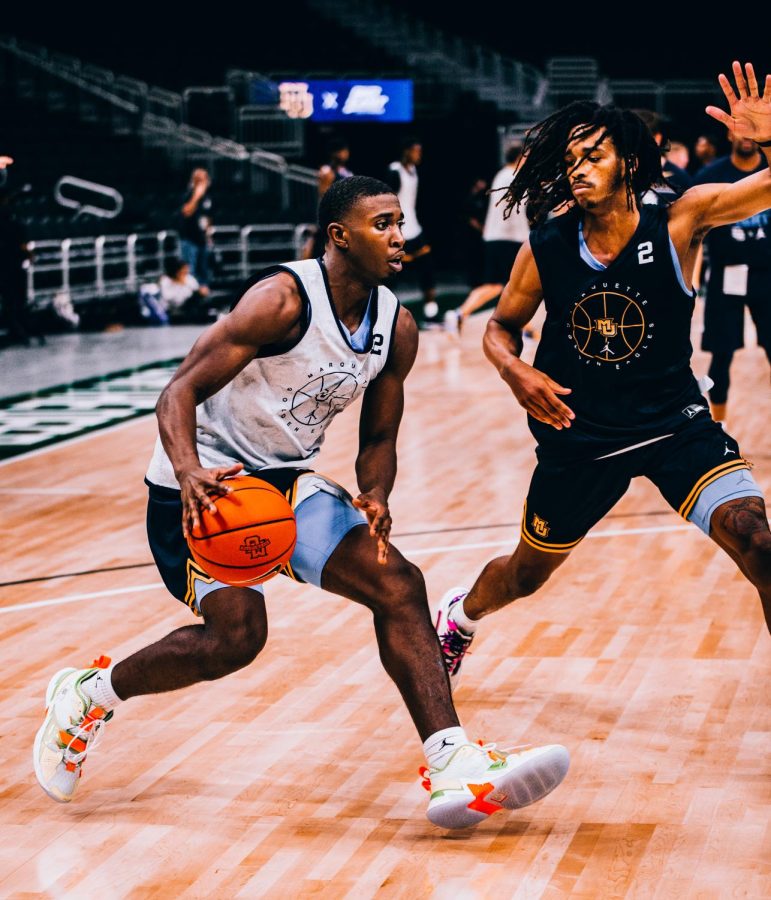 With the 2021-22 season just three weeks away, the Marquette men’s basketball team checked off another first on the preseason checklist.

Last Thursday in front of season ticket holders, the Golden Eagles practiced inside Fiserv Forum for the first time during the Shaka Smart Era.

“It’s the first time I’ve seen the court (down),” redshirt first-year guard Tyler Kolek said. “I haven’t (even) seen our court either. When I came in here for the first time nothing was down, we just saw the locker rooms. Just walking through the tunnel, you get a little starstruck seeing all our colors and everything like that.”

With the Golden Eagles featuring nine new players and an entirely new coaching staff, first-time nerves were shown at the start of practice, Smart said.

“Once they settled in, I thought they did a nice job of getting a little bit better over the course of practice, competing with each other,” Smart said. “We’re still working toward being in the type of shape we need to play the type of basketball we want to play.”

Here are some takeaways from the practice.

Lost in the fight

Along with his coaching staff, Smart showed off another one of the team’s values with new t-shirts.

This one read “I’m Lost in the Fight.”

“They’ve all had their moments. They’ve all had days where they got overwhelmed. That’s kind of part of being at this level, when it’s challenging,” Smart said. “The thing that we’ve tried to get them to understand is even when you get overwhelmed, just stay with it. Just keep going. Come back the next day; come back strong.”

With growth, there is one big area Smart said he wants to see out of this class.

“We are far from being consistent with this, are these guys understanding that they’re gonna be at their best when they play for each other, instead of playing for themselves,” Smart said.

Smart used the analogy of this year’s NBA Champions Milwaukee Bucks, who Marquette shares Fiserv with, as an example of team-first mentality led by “best player in the world right now” Giannis Antetokounmpo.

He mentioned the relationship between Antetokounmpo, Middleton and Holiday was strong due to the ability of playing for each other instead of oneself.

“Now the difference is, these guys are young, a lot of them are teenagers. And they need to learn that the only way to be their best is to lose themselves in the fight,” Smart said.

Getting into basketball shape

With Smart treating every drill as a competition, conditioning was a big focus in practice.

The team was split into two groups during drills where a winner of that drill earns points for his team.

Kolek said he has embraced the importance of conditioning within his new program.

“Just trying to change my body from even where it was last year,” Kolek said. “I was playing 30-plus minutes a game. I want to come in and do the same thing again and I got to be healthy and be in shape to do it.”

As for Joplin, who is one of two first-year forwards on the team, Smart has given him an individual challenge: parking garage climb.

This challenge is one that Smart came up with while at VCU and ran with former Indianapolis Colt tight end Muhammad Ali Cox.

Joplin is tasked to run up the entire Wells 12th Street Structure to the end of the seventh floor, which Smart said is roughly one mile, in five minutes and 45 seconds.

“And it really changed his motor and his conditioning, so I thought for Jop, that it was something that we could utilize,” Smart said.”

Smart said Joplin’s first time came out to roughly eight minutes. With 15 more tries to go until the season opener Nov. 9, Joplin is at six minutes.

Along with a focus on conditioning, one of the other main focuses for Smart is the ability to shoot 3-pointers.

Several times during practice, Smart sent his team into two groups to see who can shoot 30 3-pointers in 30 seconds first.

3-point shooting was something Marquette struggled with last season under former head coach Steve Wojciechowski. The Golden Eagles finished ninth in the BIG EAST in 3-point FG % (32%) and eighth in 3-pointers per game (6.6).

Meanwhile at Texas last year, Smart’s team ranked at the top in several 3-point categories. The Longhorns finished third in 3-point FG % (32%), second in 3-pointers per game (8.6) and had the number one 3-point field goal percentage in the Big. 12.

Being an all-around shooter, Kolek will be one to look for to be a key role player in the Golden Eagles 3-point shooting.

“I feel like I’ve always been able to do a lot of things,” Kolek said. “Last year that was just something I needed to shoot more because that was what the team needed. There’s a lot of spacing here, Coach (Nevada) Smith does a great job with the offense and it really just gets us into great positions. It’s easy reads, you just find guys open because there’s so much help.”

The Brookfield Central standout was not afraid to shoot the basketball, hitting several three-pointers.

“Scoring mostly is what I do, so I’m always looking to attack,” Joplin said. “That’s what the coaches preach to me every day is to score first. So I got that first in my head. The three-point line is usually where I live, but if they step out too much, I’ll go by them.”

Smart mentioned Joplin “doesn’t take a shot he doesn’t like” and is leading the team in shots taken in practices.

Joplin said he has adjusted to Smart’s style of play, which features a high-tempo offense and press defense.

“It’s really cool. I never really been like an up-tempo speed press type guy,” Joplin said. “We put in five presses like the first five days of practice so just getting used to that was cool but that actually benefits us speeding the other team up so I love playing for coach. He’s a high-energy guy.”

Smart said first-year guard Stevie Mitchell was not a participant in practice as he stood along the sidelines in a walking boot on his right leg.

“He’s dealing with a heel injury,” Smart said. “I don’t know the exact timetable, but it should be something that he comes back from maybe next week. A lot of it is dependent on how he recovers. We actually had to tell him to take some time away and tell him it’s okay to not practice because he’s working on recovering and getting back.”

Smart said Mitchell has been one of the Golden Eagles’ best defensive guards in practice to this point.

Mitchell, Pennsylvania’s Gatorade Boys Basketball Player of the Year in 2020-21 concluded his high school career with 2,060 points, the fourth most in league history.

Graduate student transfer Darryl Morsell was a full participant in practice. Morsell was cleared last week to practice after shoulder surgery this past summer.

The reigning Big Ten Defensive Player of the Year has made an impression on many in his short time with the Golden Eagles, including Joplin.

“Leadership for sure, and accountability,” Joplin said. “He won’t let us get away with anything, especially us freshmen. So there’s a lot of areas we got to grow and he’s making sure he’s on us about that. He can lead by example. When I see Darryl fight, I want to fight, too. He’s always doing his thing. I love playing with Darryl.”

When talking to the crowd Smart mentioned that the team is hosting an event for all fans Oct. 31 at the Al McGuire Center called “Haunted Hoops.” In addition to an intrasquad scrimmage, the day will consist of events such as:

Trick or treating with the Marquette men’s basketball team & other student-athletes
Costume contest at center court during halftime of scrimmage, prizes awarded to best costume
Other fun activities such as photo booths, balloon artists and our very own Marquette caricature artist

Then Nov. 4 the team will host Bowie State, a Division II team, for an exhibition game at 7 p.m. CST.

Until then, it is back to the lab to prepare for the season opener Nov. 9 vs Southern Illinois University-Edwardsville at Fiserv Forum at 7:30 p.m. CST.

“We got ways to go but their (the players’) attitudes have been great,” Smart said. “If we can keep getting better every day, I really like our chances to do some great things.”