Review: Adele previews emotionally honest album “30” with “Easy On Me” 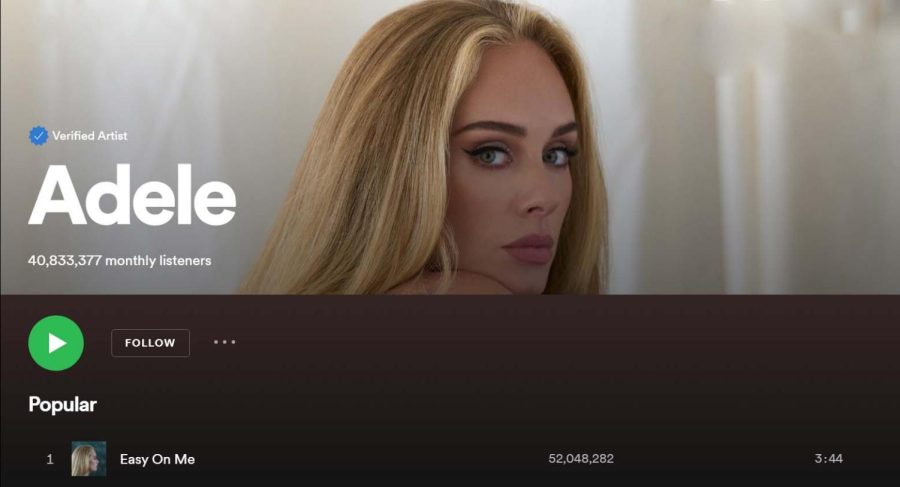 Adele released her new single "Easy on Me" on Friday, Oct. 15.

Over five years have passed since pop R&B sensation Adele released new music. But with the debut of her newest single “Easy On Me,” and the announcement of her long-awaited fourth studio album, “30,” the English singer-songwriter has given fans something to be excited about.

“Easy On Me” dropped Oct. 15, and placed listeners back into the familiar feeling of emotional anguish and nostalgia they can’t help but experience when immersed in Adele’s world.

And this record was no exception! The artist was welcomed back with open arms as the record received 24 million Spotify streams within 24 hours, breaking the record set by K-Pop phenomenon BTS’s “Butter” for the most streams in one day. The music video that accompanied the release did just as well, receiving well over a whopping 34 million views on the day of its premiere.

Adele’s return to music has been a long time coming. Now 33, the artist has spent the past three years working on “30,”  the fourth album that follows the artist’s trend of numerically titling her albums as they correspond with her age.

Each of Adele’s previous albums have been a chronicle of her life at that age, from “19,” to “21” and “25.” These chapters have seen Adele mature as an artist and as a person through her music, and “30” is looking to be no exception.

As for what the new album will be about, Adele’s answer is short and to the point. During an Instagram Live Oct. 9, when asked the question by a fan, the artist replied, “Divorce babes, divorce.”

And that idea is starkly apparent in “Easy On Me.” The record opens with a somber piano accompaniment before Adele’s melodic vocals take control. The lyrics are nostalgic, full of pain and hurt that is nothing but real and vulnerable as she sings, “I know there’s hope in these waters / But I can’t bring myself to swim when I am drowning / In this silence, baby / Let me in.”

Fans are used to feeling as if they want to cry when listening to Adele’s music, but this single brings an entirely new, raw type of emotion to the surface that leaves listeners feeling emotionally exhausted. Adele is brutally honest in her craft, a quality that’s hard to find but easy for fans to empathize with.

One lyric that stands out as overtly honest and powerful comes in the second verse as Adele sings, “You can’t deny how hard I have tried / I changed who I was to put you both first / But now I give up.”

While there are other artists who write about relationship hardships and breakups, what Adele does with her new single depicts a weight and pain that is hard to express lyrically. The song exposes the deep hurt that comes from the loss of oneself in a relationship that was originally thought to grow and last forever, and how to rebuild after it all ends.

Adele’s “Easy On Me” is an emotional and self-baring single that lays the singer’s very personal emotions out for all to see. This song previews a 12-track “30” that, if it follows the same pattern, is sure to make longtime fans and new listeners cry just the same come Nov. 19.

CBS announced Monday that a two hour special, “Adele One Night Only” will air Nov. 14. The televised event will feature a concert performance by Adele that will consist of several of her hit songs and preview songs off of her new album.

The special will also include an Adele interview with Oprah Winfrey.