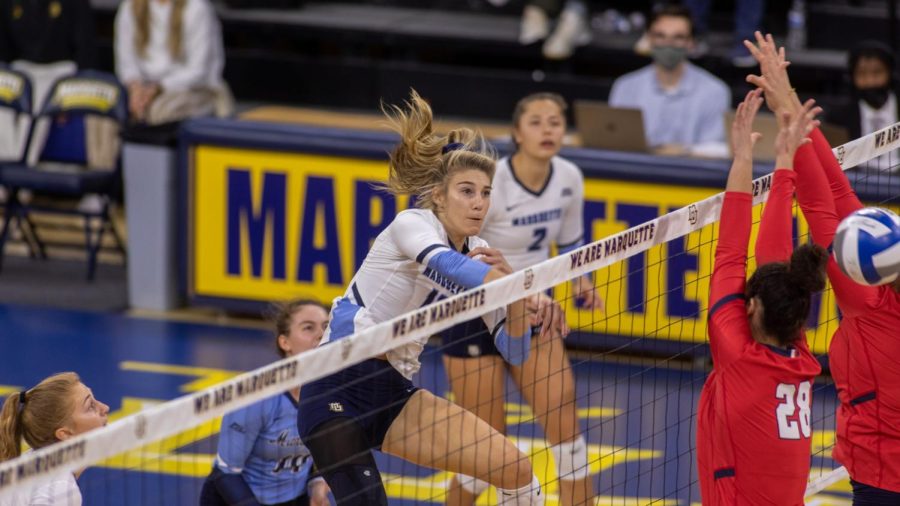 “I thought St. John’s played hard as we expected they would,” Marquette head coach Ryan Theis said. “I thought the key was our serving. Six aces, six errors, a pretty good night.”

As the trend has been all season, Marquette jumped out to an early lead in the first half, After finding themselves in a 7-2 deficit, St. John’s pulled within one with a 4-0 run. The Golden Eagles would respond and go on a 6-1 run to bring the score to 15-10.

“I thought if you can build up a lead against these guys it’s pretty important,” Theis said. “That was kind of the story in the first two sets was build a lead and they (St. John’s) crept back in.”

Coming out of the timeout, Marquette would score from a St. John’s service error and three kills from graduate student Hope Werch to take the set.

“She was feeling it,” Theis said. “The last one to win that set was just a terrific shot against a big block on a tight ball and she just went up and got it.”

St. John’s started the third set by taking its first lead of the match. The set would be back and forth until Marquette called timeout down 19-18.

“He (Coach Theis) definitely said just focus on our side, play our game, follow the game plan,” Wolf said.

The timeout would serve to be key for the Golden Eagles as they would outscore St. John’s 7-3 during the remainder of the set to win the match.

Coming off BIG EAST Offensive Player of the Week honors, Wolf led the way on the night for MU with 14 kills, 11 assists and nine digs.

“I think just hard practices during the week and just coming in and grinding each day,” Wolf said. “I know school’s getting tough, midterms are coming up, but when I’m in the gym, (I’m) just staying focused to get better.”

Werch was able to add 11 kills with redshirt first-year Carsen Murray having eight kills while hitting a match best .583.

The Golden Eagles finished the match hitting .226 and the Red Storm hit .225. Giorgia Walther led the way for St. John’s with 13 kills and six digs.

Marquette (15-3, 6-1 BIG EAST) will return to action tomorrow night hosting the Seton Hall Pirates at 6 p.m. CST. The game can be stream on the Marquette University Television YouTube page.

“They’ll (Seton Hall) finesse you a little bit which can cause some disruptions whereas St. John’s wants to kill it,” Theis said. “So I would think there will be some long volleys tomorrow. They’re pretty scrappy defensively and they can score it in a couple of different positions, so I think we’ll have our hands full.”