First-year defender is the calm presence the team needed 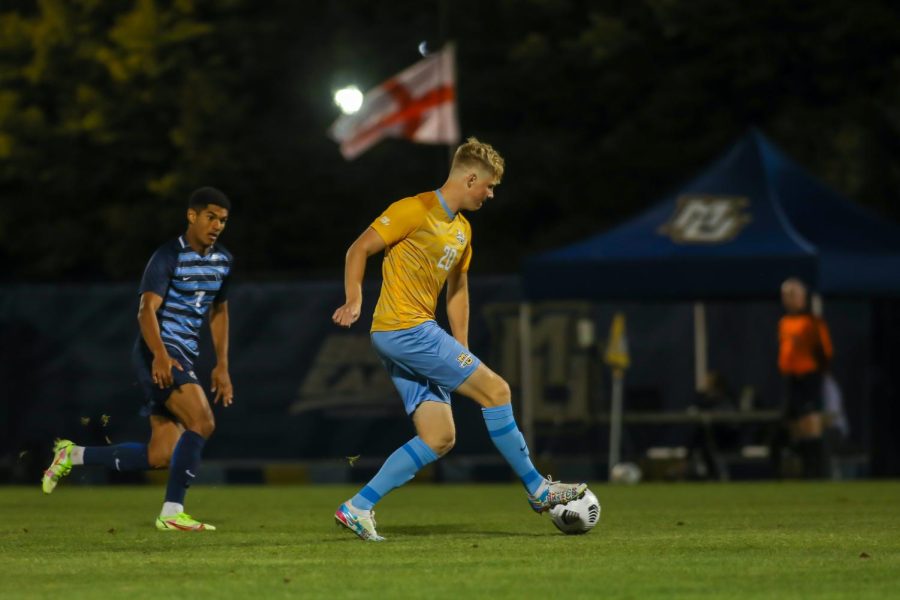 Marquette men’s soccer first-year defender, Jonas Moen would cross seas to play the game he loves: and he quite literally did.

The young lad on head coach Louis Bennett’s squad crossed the Atlantic Ocean, a sum of 3,986 miles, to play under the lights of Valley Fields. Moen, who hails from  Skedsmokorset, Norway, has been captivated by soccer since a young age.

“I remember going to my older brother’s practices when I was about five or six years old and playing with a few of the older kids,” Moen said. “Ever since then, soccer has been a part of my life, from playing every day at school to playing with my friends at home. So, I was attracted to soccer from a very early age.”

Moen said that his brother, his only sibling, acted as a key role model for his soccer career. His older brother, Andreas, still plays overseas.

Playing for Marquette has had its ups and downs for Moen, but the level-headed defender maintains a positive mindset throughout it all.

“As a team, we started off really well (and) then went on a bad streak. We couldn’t figure out how to put the ball in the back of the net so we changed a bit up on the formation,” Moen said. “Personally, I started off the season by not playing too much, I got a few minutes here and there. Not long into the season I was given the opportunity to really play in a few games and I took that and ran with it. Ever since then, I’ve played almost every minute.”

With more time on the pitch, Bennett said he has watched Moen mold into the defensive player his team was in search for.

“Every player has an acclimation period. Now that he (Moen) is comfortable, he will see a pass and play it,” Bennett said. “He doesn’t question himself as much, he uses the initial reading. He has good instincts.”

When Moen is on the field, his calm and collected demeanor can be noticed. Bennett referred to Moen as an “understated player”, who has the will to speak up when needed and is becoming more of an important voice on the team.

Bennett isn’t the only one to notice the value of the young defender on the team.

“The good thing about Jonas is that he is quite composed and calm on the ball, which is what you need at the back, someone with a level head. He’s not going to panic in tough situations,” redshirt sophomore defender Harvey Read said.

Moen said he can feel the use of the word “calm” following his name in the conversations of others.

“I like to say I’m a calm presence on the field (that) some people can look to, trust and provide offensively with the ball as well,” Moen said. “As a defender, a lot of it is physical battles and challenges with forwards. I would value my best attributes as calmness on the ball and tactical awareness.”

Bennett, who praises Moen’s ability to read the game and distribute the ball, said the Norwegian player brings forth an international style to both the team and defensive unit as a center back.

Meanwhile for Moen, the transition to U.S. College soccer highlighted some major differences in the style of play.

“The first thing I noticed to be different was the physicality, it (the U.S. game) is a very physical level. You play against athletes here (in the U.S.),” Moen said. “It is high speed, high intensity and super tiring, but very fun, very back and forth and a lot of goals. That’s the main difference from international, because where I played before it was a more tactical focus and keeping the ball or keeping a clean sheet.”

The transition from overseas to the States isn’t just shown through the level of play. In many ways, Moen’s personality on and off the field is credited to his upbringing.

“I hold leadership very high, though I’m not the most vocal guy, I’m not the guy that screams, but I like to think of myself as a leader in a way,” Moen said. “I am very structured and organized, which I think you need to be as a defender. You need to talk to the players in front of you and talk to the players next to you. Organization is a value I hold dearly both on the field and in my personal life.”

The tall and towering 6-foot-2 defensive force that is seen on the field does not diverge from the one Moen encounters off the field.

“Calm, composed, and strong. That’s how I’d describe Jonas,” Read said. “He has a reserved character, but I think that might just be how people from Norway are generally. I recall one game when I turned around and he (Moen) was tangled in the net.”

Moen said, though he is a far way from home, his transition to Marquette has been easier than he first expected, but nothing is as simple as it seems.

“I still remember to this day the first time I left for the U.S.,” Moen said. “Leaving my mom and dad at the airport back home, that was a really tough moment. I sort of thought ‘what am I doing?’. Luckily, I never felt really lonely, I mean you have so many activities going on that there is not a lot of time to sit alone and reflect on what is going on back home. You’re just so focused on what is going on here (Marquette) due to the good environment and the group I’m a part of. That has made the transition very easy.”

Moen said the next time he will see his family will be Christmas break. Until then, the defender plans on improving his skills with the Golden Eagles.

“I really want to be noticeable and important character here at Marquette,” Moen said. “As for the future, it’s every guy’s dream about playing professionally, so that is the ultimate goal. For now, I am just going to focus on my day to day at Marquette and perform to the best of my abilities here and see where that takes me.”