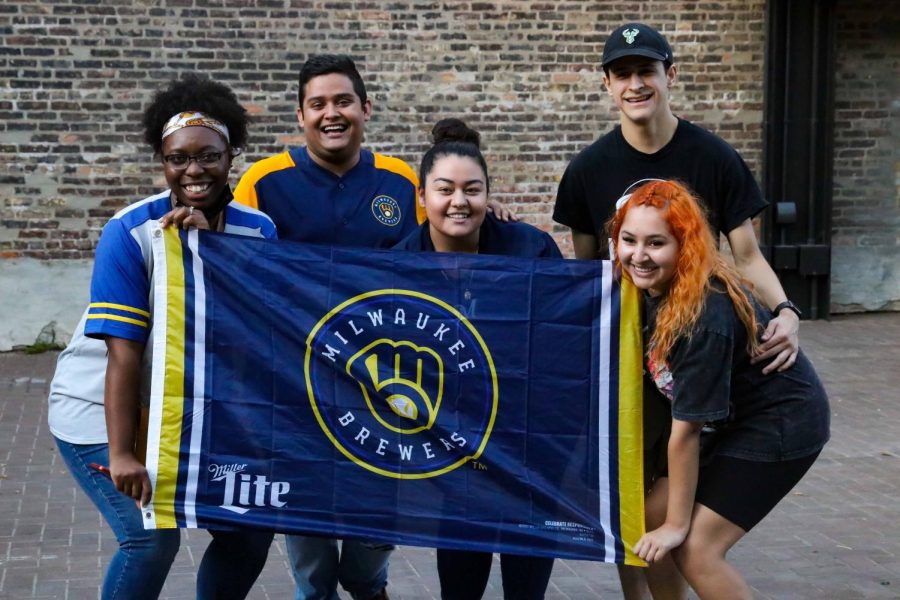 When the calendar flips to October, some people think of Halloween, fall weather and clothes and the college basketball season starting soon. But for others, October is the beginning of one of the most exciting moments of the year: Major League Baseball’s Postseason.

This year, the road to the World Series went back to MLB’s original format, with ten teams getting into the playoffs after a 162 game regular season. Due to the COVID-19 pandemic, last year’s regular season was only 60 games and allowed 16 teams to make the playoffs.

One of the exciting teams going into the playoffs were the Milwaukee Brewers, who dominated the National League Central Division with their pitching, finishing 28 games over .500.

Carlos Nuñez, a junior in the College of Communication, attended games one and two of the National League Division Series between the Brewers and Atlanta Braves. And for Nuñez, the energy at American Family Field was crazy, especially when Brewers first Basemen Rowdy Tellez hit a go ahead home run late in Game one.

“When Tellez hit the homer, you could probably hear it on campus,” Nuñez said. “Playoff baseball is something else, and I feel like Milwaukee is in a unique situation to make a mark as a great sports market.”

Back in July, the Milwaukee Bucks won their first NBA championship since 1971. Last year, the Los Angeles Dodgers and Lakers won a championship in the same year for the first time since 1988. Going into the series, the idea of the Bucks and Brewers going back to back had Nuñez excited.

“It would give a lot more buzz to the city. I feel like it would show people that we’re more than just cheese and a nice lakefront,” Nuñez said.

Unfortunately for Nuñez, the Brewers went on to lose the Division series, 3-1 to the Braves. Dave Umhoefer, a professor in the College of Communication, saw the Brewers’ downfall before the playoffs started.

“They started to not play their best players over the last three weeks and they ended up losing a lot of games,” Umhoefer said. “You wondered if they were gonna lose momentum, if they were gonna start hitting again. And as it turned out, they never got the bats going again.”

The Brewers batted .192 as a team during the series, striking out 48 times in four games versus the Braves.

In the bottom of the eighth inning of game four, Braves first baseman Freddie Freeman hit a go-ahead home run to help send Atlanta to its second straight National League Championship Series. And Umhoefer heard all the drama unfold on the radio.

“Bob Uecker had a very sad call on that,” Umhoefer said, speaking on the Brewers play-by-play announcer. “It was just shocking cause it was off of Josh Hader, who hadn’t given up a home run to a lefty all year. He hadn’t given up a run since July 28. And boom, that was pretty much game over.”

But despite the rough offensive series, Umhoefer still has hope for the Brewers’ future, despite them being currently one of six active MLB teams that haven’t won a World Series title.

“Their pitching is amazing, and they got even more young pitchers coming up who are good,” Umhoefer said. “They obviously need to add more hitting. They got a really good manager, so I’m really optimistic.” The Brewers are lead by manager Craig Counsell, with young pitchers like Aaron Ashby and Freddy Peralta making big strides for the team.

Baseball’s final four in this year’s playoffs include the Boston Red Sox, Houston Astros, in the American League and the Los Angeles Dodgers, and the Atlanta Braves in the National League.

Remy Gaertner, a junior in the College of Arts & Sciences and Brewers fan, said he doesn’t really plan on following the rest of the playoffs.

“I don’t have too much time right now anyway, but now I have a sore spot when I watch baseball,” Gaertner said. “I plan on continuing on with my life acting like the Brewers never lost.”

Despite his current feelings about baseball, he still put in his take for who is winning this year’s Fall Classic.

This is in reference to the investigation that revealed the Houston Astros were sign-stealing in 2017, in route to their World Series championship against the Los Angeles Dodgers.

Regardless of who they are rooting for, baseball fans are happy the sport has come back to a sense of normalcy at the Major League level. And with the World Series starting Oct. 26, it’s only a matter of time before October gets even crazier.

Check out the audio package for this story by A&E Audio Producer Julianna Okosun.