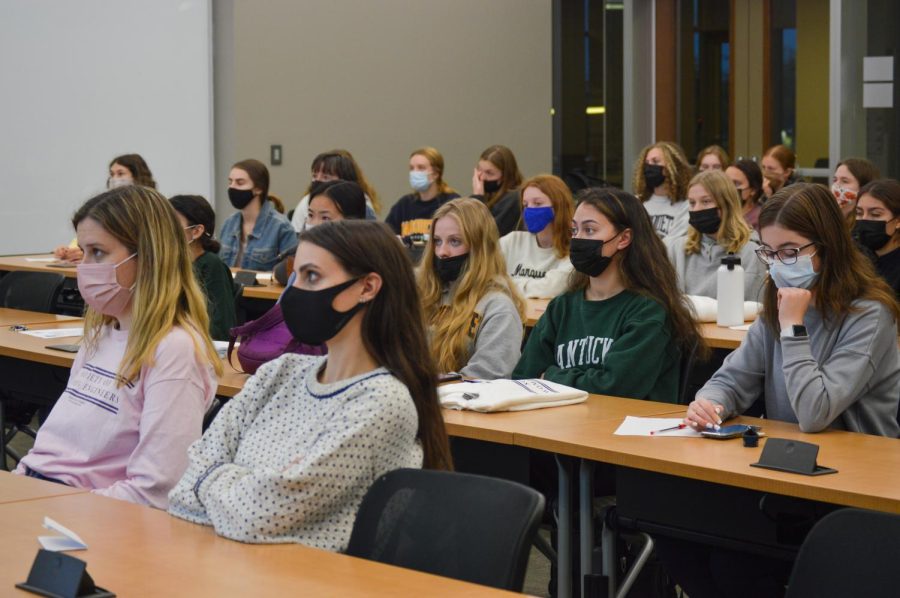 Members of the Society of Women Engineers student organization watch a video during a club meeting on October 5, 2021.

“Guys will be like ‘Oh you’re so brave for going into computer science’ … and that just kind of makes me angry like ‘What? Why is it? Why should it be different?,'” Celeste Lagman, a senior in the College of Arts & Sciences says.

Lagman says she chose to study computer science because she was always super interested in technology growing up. When she entered high school, she says she decided to enroll in a coding class to see if she liked it.

“I’m learning the same stuff as you [men], but I’m just a woman.” Lagman says.

After taking her coding class, Lagman realized she really enjoyed computer sciences and decided to major in it.

Even though women earn the majority of upper-education degrees in the United States, they still make up the minority in science, technology, engineering and mathematic related fields.

Since 2009, women graduating with a degree in STEM have increased by 66.3%; However, they still only make up 32.4% of all professionals with a STEM degree.

Marquette University has STEM-related groups women can join to find a community and inclusivity such as the Association for Computing Machinery-Women, Society of Women Engineers, the Women’s Innovation Network’s WISDOM, etc … Women can also join STEM-related clubs that include both males and females.

ACM-W was established at Marquette in 2019. The organization strives to uplift, honor and campaign for the engagement of women in all areas of computing and to “advance the contributions of technical women.” ACM-W also has a variety of programs available to all members.

Clare Herring, a senior in the College of Arts & Sciences and current president of Marquette’s ACM-W chapter, says although ACM-W is very small, joining the organization helped her find a community of other women in a similar field.

“Even to this day, most of my friends aren’t in my major, because the computer science department is so small on campus,” Herring says. “ACM is a general community for computing, and ACM-W … is more of a subset of women.”

Because of COVID-19, Herring says they haven’t had many events yet. Though, Lagman says she joined the club because she had never heard of an organization like it before.

Despite finding a community of women on campus with similar interests, Lagman, vice president of ACM-W, says she has had classes at Marquette where she has been the only girl.

“I kind of didn’t realize at first that it would be so male-dominated at Marquette because the classes I took in high school always had a decent amount of girls in them. I knew less girls took computer science and STEM classes, but I didn’t know it was this drastic,” Lagman says.

Debbie Perouli, an assistant professor in the department of computer science, says that computer science classes generally suffer from low female enrollment all around the world.

Herring says her classes are typically 5-10% women, but in classes of around 20, maybe six or seven of those students are female.

Despite low female numbers, Perouli and Herring both agree that as long as someone is passionate about the field they are going into, they shouldn’t be intimidated of being the only girl in the room.

“I think it’s more important to find something that matches your skills and what you like doing than to be held back because of the idea that it’s male-dominated, and I don’t think that they have anything to be afraid of,” Perouli says.

Herring says although there are not many women in STEM, there are still women present, and every female she’s spoken to has been passionate about what they are going into.

“Reaching out to females that are in the space is huge because A. it’s networking, B. you’re able to get a representation,” Herring says. “I think it really helps build confidence knowing that you can find your people and your community while still doing something you love and that you’re passionate about.”