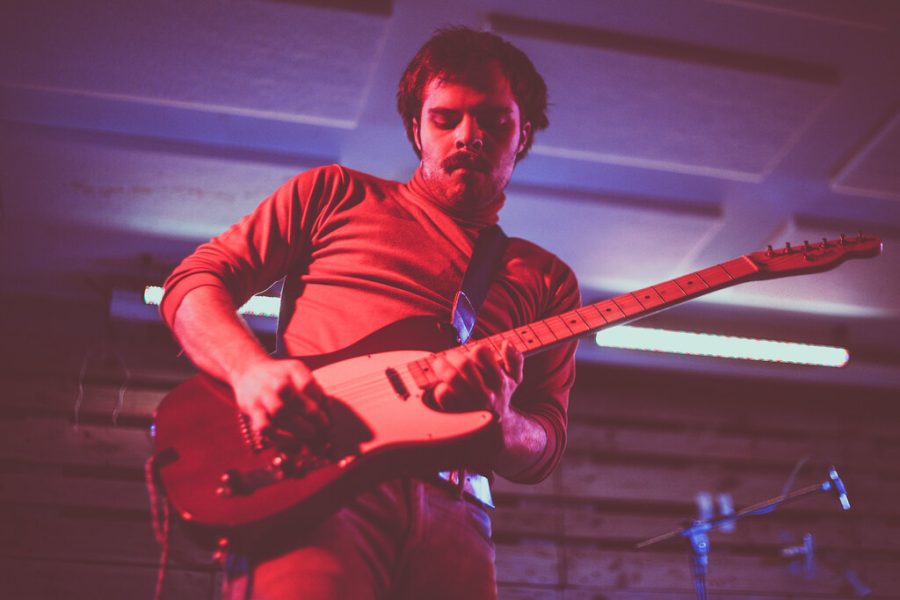 Lead guitarist, Christopher Vanderkooy, shreds his guitar during a performance back in 2018.

Vancouver indie rock band Peach Pit returns with a new single and music video “Up Granville.” This is the band’s first release since last October when they released the deluxe version of their sophomore album, “You and Your Friends,” which featured three bonus tracks.

“Up Granville” starts out with a soothing guitar riff that is continued in a theme and variation style throughout the entire song. This introduction leads into a mellow and melancholy tune about a narrator observing a lover who refuses to believe that they are loved. Fans speculate that the narrator of this song is addressing the narrator of many other Peach Pit songs. This piece takes an outside perspective on someone who is struggling with love, which contrasts with the usual point of view of someone reflecting on their own experiences.  The title of the song may be a reference to Granville Street in Vancouver, the longtime home of the band members.

The soothing vocals from frontman Neil Smith give this song a warm and comforting feeling, despite its rather doleful lyrics. Of course, any Peach Pit song would not be complete without a gorgeously executed guitar solo from guitarist Chris Vanderkooy, a true trademark of the band.

The music video that accompanies the song also contrasts with other content the band has produced. While other videos, such as those of the songs “Shampoo Bottles” and “Drop the Guillotine” have had distinct storylines, this one depicts seemingly random, yet idyllic, scenes of the band members hanging out and driving around in an exquisite countryside. The aesthetic of the video toes the line between vintage and modern, rural and suburban. It leaves the viewer wondering what the band members are talking about or feeling in each of the disconnected scenes. One thing that is certainly conveyed through the music video is the true friendship and camaraderie between the band members.

Since canceling their 2021 tour dates, Peach Pit has had a few recent performances, notably at Firefly music festival in Dover, Delaware, and Baby’s Alright in New York City. Fans anticipate more tour dates to come, as the band is set to release their third album sometime in the near future.