Basketball teams introduced to fans with new season around the corner 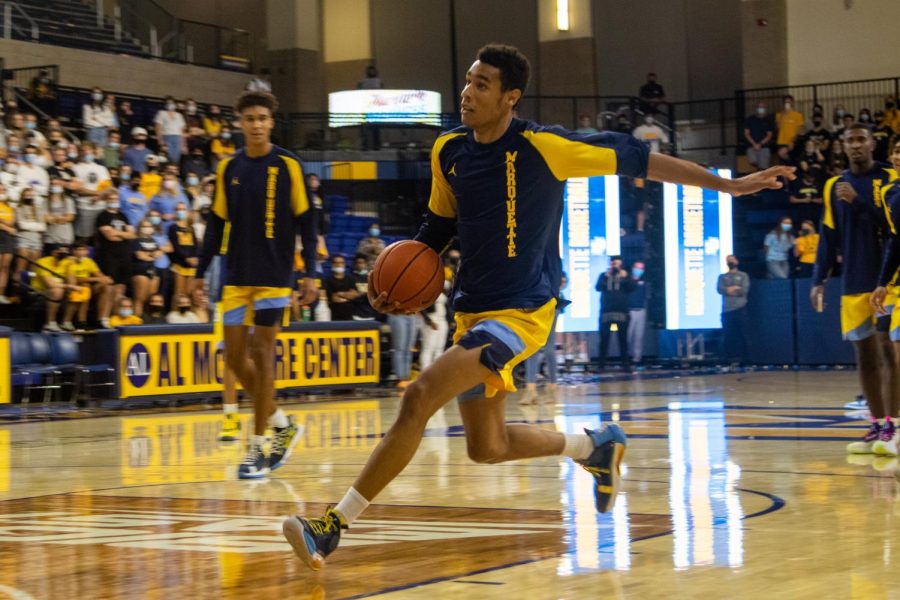 With Marquette Madness coming and going, a new season for Marquette men’s and women’s basketball is blossoming upon Marquette Nation.

“Last year was extremely difficult,” Marquette women’s basketball head coach Megan Duffy said. ”l’ll never forget our first game coming out here [Al McGuire Center] and there was nothing but the sound of basketballs and that’s about it. So to have our alums, our fans, our family, our friends back in just as kind of a kickoff to really just a couple days of practice it’s pretty exciting just to know basketball season is right around the corner.”

Here are some takeaways and updates from Friday night’s event:

This year’s Marquette Madness featured a new format of events, with the biggest change perhaps being there was no concert that followed the event like in years past.

Instead, it was an opportunity for both teams to use the event as a meet-and-greet with fans. The night consisted of team introductions and videos, T-shirt tosses, skills competitions, performances from the Marquette dance team/cheerleaders and a dunk contest.

It was also the first time since his press conference back in May that new men’s basketball head coach Shaka Smart was able to introduce himself to the hometown faithful.

“The biggest thing is just being back around some fans and students,” Smart said. “Being at Marquette, obviously, there’s a passion here for basketball and with us being new, really 90 some percent of us in our program, including me, we’re just excited about building. And so hopefully, our guys can continue to keep getting better and we can build some great moments as we go and continue to get better.”

Including Smart and his coaching staff, there are nine new players — four transfers and five first-years — within the men’s program this year.

One of those first-years is forward Keeyan Itejere. The Knightdale, North Carolina native is one of Smart’s three recruits from Texas who flipped their commitment and followed him to Milwaukee.

“First time very exciting, just seeing the energy around here especially after COVID,” Itejere said. “After coming to this event and really just in the practices, I know what this program is about, the togetherness [and] the unity in this program. Honestly, I’m just really excited for this first year.”

Smart said newcomer Tyler Kolek’s ability to shoot and his work ethic have stood out through summer practices and now official practices.

“He can really shoot,” Smart said. “He’s the hardest worker on our team from the standpoint of extra work. One of the hardest workers I’ve ever seen. He’s a guy that can really become a fan-favorite in time. In short order, they’re not going to be saying ‘who is that,’ they’re gonna be saying, ‘we want him shooting open threes.'”

Kolek transferred to Marquette and the BIG EAST after one season in the Atlantic-10 at George Mason University where he was named the conference’s Rookie of the Year after averaging 10.8 points, 3.6 rebounds, and 2.3 assists per game.

Last season, women’s basketball sat 10th in the BIG EAST in 3-point field goals made, averaging 4.1 per game. During the off-season, Duffy went out to sign graduate student Karissa McLaughlin in hopes of improving the Golden Eagles’ shooting from beyond the arc.

McLaughlin, who transferred to Marquette this summer, is the all-time 3-point shooter in Purdue women’s basketball program history (244) and is a career 35% 3-point shooter.

“We need more three-point shooters for sure,” Duffy said. “Karissa brings that instantly. We’re going to try and get as many touches from there as possible but she can also play some point for us which is nice. We can move Jordan King around so (I) really like that dynamic. I think she’s going to only get better and bring a lot of experience on the court.”

Duffy mentioned graduate student forward Lauren Van Kleunen is still getting back into shape after recouping from an injury after last season. Duffy did not mention if Van Kleunen is recovering from a specific injury.

“She’s just steady for us,” Duffy said. “One thing when you got veterans, they don’t need to practice that much and they know the expectations. She’s been a great voice. She’s always been a calming influence. So that’s what she’s going to bring to some of this blend of new talent coming in.”

Meanwhile on the men’s side, Smart said graduate student transfer Darryl Morsell will be cleared by doctors this week. Milwaukee Journal Sentinel’s Ben Steele reported that the 2020-21 BIG TEN Defensive Player of the Year had shoulder surgery in August.

“He will be back playing live for the first time since last season next week,” Smart said. “He’s been working out and been doing a bunch of stuff but not live basketball so it’s gonna be literally his first time playing in several months.”

Smart announced there will be two opportunities for the Blue and Gold faithful to catch a glimpse of this year’s team before the season opener Nov. 9 against Southern Illinois University-Edwardsville.

Both the men’s and women’s basketball teams open up their season in 35 days against SIUE and Alcorn State, respectively. Make sure to follow @MUWireSports on Twitter for updates throughout the seasons.