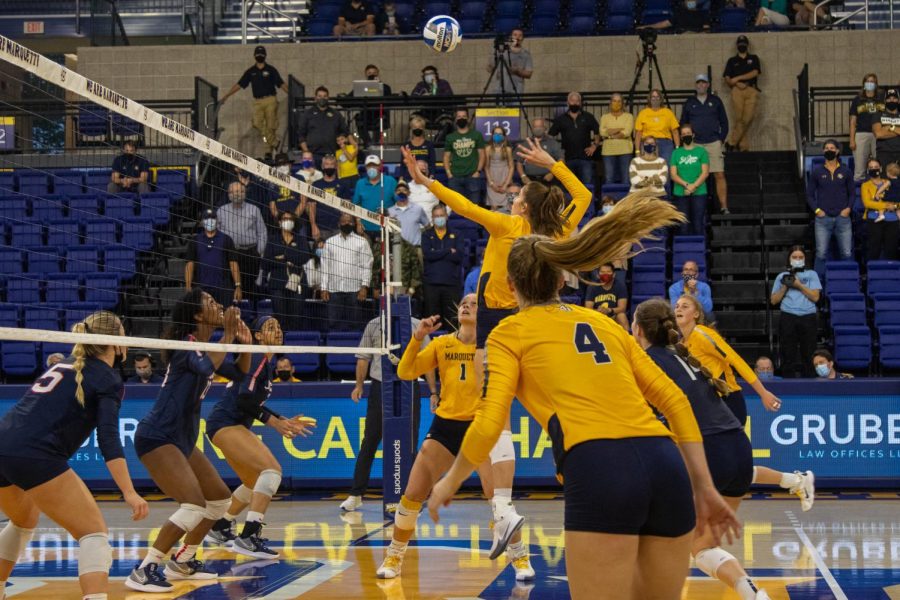 Claire Nuessmeier goes up for kill attempt in Marquette's 3-1 victory on UConn Oct. 1 at the Al McGuire Center.

It is the Golden Eagles’ seventh straight win and fourth straight victory in conference play.

Marquette led early in set one, going up by as much as 10-5, but a 7-2 run from DePaul changed the outlook of the set.

From then on, the score would stay close with six ties and two lead changes, but Marquette eventually pulled out the set despite the Blue Demons staving off multiple set points.

Set two was domination from the Golden Eagles, as they hit .533% for the set with 18 kills.

After DPU kept the second frame close early, the Golden Eagles would go on a 7-4 run and take a 17-10 lead. DePaul would get no closer than seven points throughout the set partially due to the three attack errors and two service errors the Blue Demons committed.

The third and final set would be much of the same as the set started close, before the Golden Eagles would pull away later on to get the win.

This time, the teams were tied 13-13 before MU used a 7-1 run to pull away and take the match in straight sets.

Graduate student Taylor Wolf led MU with a double-double on the day, notching 12 assists and 10 digs to go along with nine kills.

Fellow graduate student Hope Werch had a standout performance with nine kills, two service aces, three blocks and five digs. Werch is now up to 161 aces for her career, needing 16 more on the year to tie the Marquette all-time record.