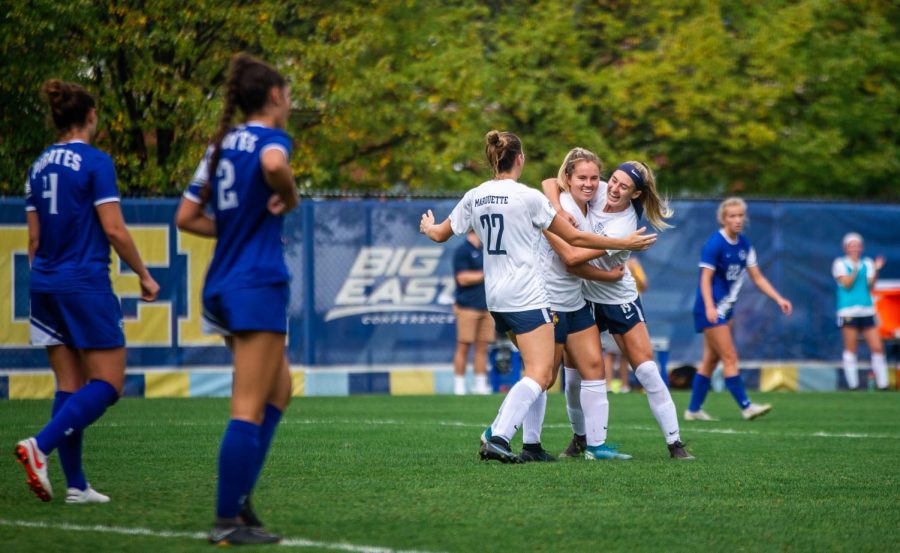 Marquette women's soccer celebrates after Hailey Block's goal in the 69th minute in its 1-0 win over Seton Hall Oct. 3.

“They’re (Seton Hall) a good team. They’re welled coached. I really respect their coach and what she’s trying to do,” Marquette head coach Frank Pelaez said. “It’s Sunday and Sunday’s are a grind every coach in the country will tell you that and (the) kids found a way to grind today.”

As it has been a season long trend, Marquette controlled possession of the ball right out of the gate.

In the 19th minute, redshirt junior midfielder Rachel Johnson placed a corner kick from the left corner giving the Golden Eagles a scoring opportunity but Pirates goalkeeper Grace Gordon grabbed it in the air.

Seton Hall’s best scoring opportunity in the first half came in the 27th minute when they took two shots on goal in a span of 17 seconds but Marquette redshirt first-year goalkeeper Mikki Easter saved both.

Then in the 39th minutes, the Golden Eagles would have one more opportunity to break the silence before halftime when Maille McDermott was book for a yellow card just outside the 18-yard box giving Marquette a free-kick opportunity.

Johnson’s fired one down broadway from 20-yards out but Gordon pushed it over the net at the last second.

In the 65th minute, the Golden Eagles looked to have put one in the back of the net but it was waived off after they were called for a foul.

Then four minutes later, redshirt sophomore midfielder Hailey Block put one in the back of the net to break the silence. Redshirt first-year forward Elsi Twombly and Johnson were awarded the assist.

“Elsi and I have a really great connection. I have played forward with her a few times and she’s always been really great sharing the ball and has laid a ton of opportunities for people,” Block said. “And so today I saw when she got the ball, I saw that opportunity and she gave me a great ball and just was there to finish it.”

Block’s first goal of the season came in front of alumni and both her parents.

“It’s really exciting,” Block said. “It’s been awesome. This season’s the first time playing on Valley for me so to have them out watching the games and being in the stands has been like beyond fantastic for me. They just bring me so much love and energy especially so close to home.”

Marquette outshot Seton Hall 17-8 on the afternoon. Block said Marquette’s attack of approach continues to be consistent game in and game out.

“We always are constantly giving each other opportunities to score goals,” Block said.” We’re really focused on making sure we take advantage of those opportunities and finish them. So we’re still building off of that, but it’s awesome to get a few goals last few games, so just keep it off that.”

In the 11th minute, Wetherell suffered an injury to the face off a ball deflection. Wetherell was taken out of the came to be attended by Marquette’s training stuff but would return in the second half.

“Katrina is a woman who will not stop and if I keep her on the bench, of course safety first, but if I keep on the bench, it doesn’t help us on the field. She’s a soccer player and you’ve got to want those type of people around you at all times.”

In conjunction with Marquette’s 2021 Homecoming Weekend, the team paid tribute to 18 former players during halftime.

“It’s the only reason I do what I do.” Pelaez said. “For the people that helped me through my process, this win is for them. I do appreciate them at all times. It’s very important, it’s what Marquette is (all) about.”

Easter earned her fourth clean sheet of the season, finishing with three saves.

Marquette (7-4, 3-1 BIG EAST) will now head to Storrs, Connecticut to open a two-game road trip against the UConn Huskies Thursday at 6 p.m. CST.

“We haven’t been on the road like that since since Utah, when we’re on the road for five days and that takes some getting used to,” Pelaez said. “I think we learned from the past and we’re going to try to do our best against a really tough UConn team….And hopefully we can do some damage out there.”