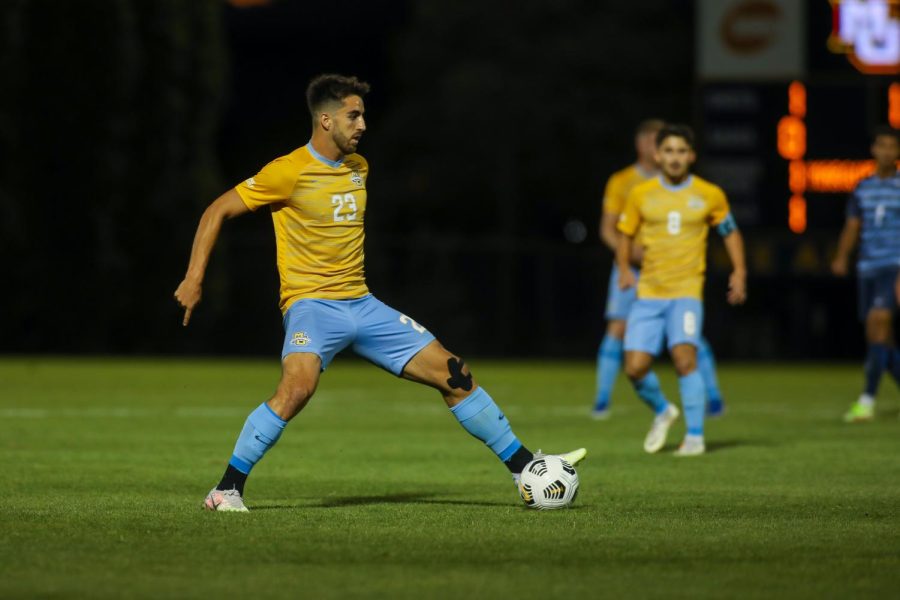 Zyan Andrade (23) makes a touch on the ball while heading to net in Marquette's 1-0 loss to Villanova Sept.18. (Photo courtesy of Marquette Athletics.)

In their return to Valley Fields for alumni night, the Marquette men’s soccer team drew with No. 22 Providence 2-2 in an intense overtime matchup Saturday night.

“We knew they were going to be a really good team, you’re not in the top-25 at this time in the year for no reason,” Marquette head coach Louis Bennett said. “Providence is always resilient and a well-coached team so we knew they would be difficult.”

Nothing could separate the two sides in the first half as just one shot on target was recorded which came off the head of Providence forward Davis Smith, whose header hit off the top post before Marquette was able to clear the ball out of the box and avoid danger.

The Golden Eagles wasted no time in the second half however.

In the 47th minute redshirt junior forward Lukas Sunesson found redshirt junior midfielder Zyan Andrade right outside the box, where the Brazilian native would make no mistake, striking one past Providence goalkeeper Lukas Burns to give Marquette a 1-0 lead.

Andrade’s first goal of the season couldn’t have come at a better time, as it put the ranked Friars on the ropes on the road.

For the next 30 minutes, both sides had their fair share of chances, but nothing to show for it on the scoresheet.

Marquette redshirt junior goalkeeper Chandler Hallwood did his best to limit the Friars attack as he had a season-high eight saves while facing a total of 20 shots on the night.

With the game coming down to a close in the 85th minute, Marquette won a set piece outside the box after a foul from Providence defender Miguel Candela Bravo.

First-year midfielder Edrey Caceres sent in the free kick into the box which found the head of redshirt sophomore defender Harvey Read. Read’s header deflected off Providence sophomore goalkeeper Lukas Burns before Sunesson was there to fire home the second chance from close range to give Marquette a 2-0 lead.

With just five minutes left in the contest, Sunesson’s third goal of the season to double Marquette’s advantage seemed to seal the victory for the Golden Eagles, but the Friars had other plans.

In the 87th minute, Providence junior midfielder Gage Raftery found himself with the ball right outside Marquette’s box. Raftery fired a shot past Hallwood into the top corner to cut Marquette’s lead to 2-1 with just less than three minutes left to play.

About 90 seconds later, Providence would do the unthinkable and tie the game 2-2 after Christopher Roman’s header from a cross sent into the box sailed over Hallwood into the back of the net to stun the Marquette faithful.

The contest would then go into extra time where both teams had few chances to win it, but with both sides suffering from fatigue the match resulted in a draw after two periods of extra time, earning both teams one point in BIG EAST play.

“We’re going to sew up our wounds and take the positives out of the game,” Bennett said. “We have a point against a top-25 team and we will move on. We’re firmly fixed in the middle of the (BIG EAST) table, and we have a great chance to move on up going forward.”

Marquette (4-4-1, 1-1-1 BIG EAST) won’t have too much time to dwell on the result however, as the team has a short turnaround with the Xavier Musketeers coming into town Wednesday night.

“We’re going to work on what we can do to improve these next couple of days to prepare for Xavier,” Sunesson said. “Hopefully we will be able to get a home win for our fans.”

The Musketeers come into Wednesday’s matchup with a 6-4 overall record but are 0-3 to start BIG EAST play. Kickoff at Valley Fields is scheduled for 7 p.m. CST.