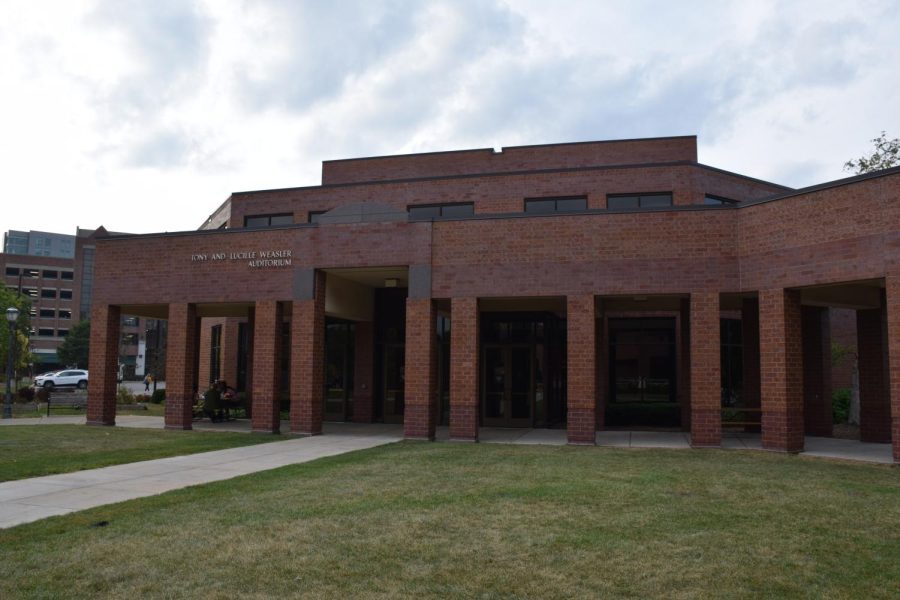 The Green Knight and a panel discussion will be hosted in the Weasler Auditorium.

Raynor Memorial Libraries and the Marquette Core Curriculum are co-sponsoring a screening of A24’s The Green Knight and a panel discussion on Thursday, Oct. 7, from 5 p.m. to 8 p.m. in the Weasler Auditorium.

The Green Knight is a film that discusses King Arthur’s nephew going on a quest to confront the Green Knight- who is a giant in Camelot. Risking his own life, his nephew goes on an adventure to prove himself to his family and court.

The film “The Green Knight” by David Lowery is an adaptation of the 14th-century medieval poem, “Sir Gawain and the Green Knight.”

Liza Strakhov, assistant professor of English, organized this event after seeing another school post about it on Facebook. She then reached out to representatives at A24, the studio behind the film, and humanities and humanities-adjacent departments at Marquette about funding.

Raynor Library and the MCC Curriculum agreed to co-sponsor the private screening.

After the screening of the film, university professors are holding a roundtable comprised of Liza Strakhov, Jacob Riyeff, Gerry Canavan, Lezlie Knox and William Fliss.

They will discuss their reaction to the film and compare the film to the original poem.

“Half of my medievalist colleagues think it’s an atrocity because it changes so much of the original work, and the other half, myself included, are obsessed with how well researched the movie is and how it expands the King Arthur and the Round Table universe and riffs off the poem’s themes,” Strakhov said.

Strakhov said she loves that the movie does not focus on typical themes seen in pop culture today.

“What I love about it is that it departs so radically from the sex and violence we’ve gotten way too used to in our medieval pop-cultural fare, in my opinion, to show you a very different side of medieval thought,” Strakhov said.

Noah Smith, a junior in the College of Arts & Sciences, is attending the screening because “The Green Knight” is related to the time period that he is studying with Strakhov.

“I love the literature of the medieval ages, so I am interested to hear more about it, to learn more about it and get a historical understanding of this cool and interesting time that is hard to study sometimes,” Smith said.

Jacob Riyeff, visiting assistant professor of English at Marquette, said this event is important because it’s a chance to focus on how the past is a part of the present.

“The screening and discussion are a chance for the Marquette community to face this nature of story head-on, and again, have fun watching a new movie at the same time,” Riyeff said.

Riyeff said that the panelists will have various perspectives on medieval material and how the stories are retold today.

“We’re hoping that the panel discussion will give the audience a deeper appreciation for what films like The Green Knight try to do and the variety of responses an audience can have to the same work,” Riyeff said.

Evy Molebash, a junior in the College of Arts & Sciences, said she decided to attend the screening after talking Strakhov’s medieval literature class.

“I am attending this panel because we briefly talked about Sir Gawain and the Green Knight in class, but never dove into it. I am excited to hear Dr. S talk again about something she is so passionate about because she is the reason I know what avenue in history I want to study, History and International Affairs,” Molebash said.

Lezlie Knox, chair of History at Marquette said she sees this as an opportunity for students to learn more about the medieval period.

“As director of the Interdisciplinary Minor in Medieval Studies, it’s a great opportunity to interest students in learning more about this period and its sources, as well as the ways the Middle Ages is currently perceived in popular culture,” Knox said.

Through this screening, Knox said that the audience will have the opportunity to have a medieval experience.

“Where we might think of reading as sitting down with a book or tablet, medieval audiences often experienced texts orally, adding details and embellishing stories for each other.  In a way this screening and the panel will engage that medieval experience,” Knox said.

Jack McMeen, junior in the College of Arts & Sciences, has seen “The Green Knight” film before and has read the poem twice. He hopes to get better insight into the parts of the movie that he had trouble understanding.

“I am interested in seeing it again to hopefully some better understanding of certain aspects of the film that I missed the first time around and having dedicated class time to discuss the poem,” McMeen said. “I am looking forward to seeing other people’s opinions about the film.”

The event will start at 5 p.m, and after the movie, the panel discussion will last until 8 p.m.

“It should be a fabulous time, and I’m looking forward to sharing a very enjoyable evening with students and colleagues,” Riyeff said.

This story was written by Hannah Hernandez. She can be reached at hannah.hernandez@marquette.edu.