At the tail of career, Kindl looks to make most out time with Marquette 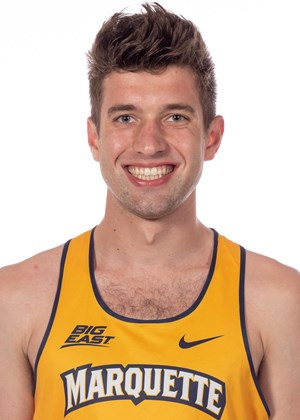 Zak Kindl transfered to Marquette from Washington State this past summer. (Photo courtesy of Marquette Athletics.)

Marquette’s newest addition, Zak Kindl is racing the clock as his eligibility is winding down.

With the COVID-19 pandemic raging during Kindl’s senior year at Washington State University, he knew that he wanted to continue his running career. With the NCAA granting athletes an extra year of eligibility due to the coronavirus, many athletes took advantage of that decree. Lucky for Kindl, he has two years left.

“Having been able to run for four years and these two more years have definitely been a blessing. I’m excited to see what I can do in the last few years, but I’d definitely say slow and steady improvement so I’m happy that I still get the chance to do some more,” Kindl said.

After redshirting his first-year and a combined three races during his tenure at Washington State, Kindl said he has something to provide this year for the Golden Eagles.

“I dove in head first to a little bit of uncertainty. Just wanted a new adventure in a new city, with a new team. So, I committed like sight unseen and I didn’t get to visit campus at all or anything because of COVID-19. However, it’s worked out great so far so it’s a leap of faith. So far it’s really been paying off,” Kindl said.

In the team’s most recent meet Oct. 2 at the Louisville Classic, Kindl posted a time of 25:35.4. Kindl’s Personal Record (P.R.) is 24:40. Head cross country Coach Birren mentioned that it’s early.

“As it starts to get colder out, I expect times to start dropping,”Birren said. He also mentioned that runners love the colder weather and he expects his runners to drop their times as the season gets later.

Sophomore runner, Dan Weizeorick said that Kindl’s high level of experience not only helps the Golden Eagles on the course but also has been a useful resource at practice.

Birren said he has enjoyed getting to know Kindl since joining the program.

“He’s really humbled and excited to be on a team where he gets to be a contributing factor,” Birren said. “I just think he’s staying a little bit more motivated knowing that he’s gonna be able to race from week to week.”

Birren explained that in a short period of time, Kindl has been a difference maker in a positive light to the team.

“He’s a contributing factor and he’s staying motivated knowing that he gets to race week to week,” said Birren.

As an elder statesman on the team, his teammates look to him for his experience and his mentorship for younger athletes on the team.

“I learned from a running perspective the purpose of relaxing and understanding the long haul of the season. Also, not to put much pressure on myself on one day or race,” Weizeorick said.

Birren echoed the sentiments from his runners on Kindl’s experience being used as a resource.

“I expected him to fit in well with our group of guys as far as having been plugged in with a group of guys for training is right where we need him to be,” Birren said.

Kindl said one of the main reasons why he chose Marquette was for the academic rigor that is offered. Physical Therapy.

“Knowing that I wanted to go to grad school, I kind of threw a Hail Mary to Coach Sean Birren at Marquette, knowing that school is the priority,” said Kindl.

Birren said that Kindl is “definitely plugged into his school work and he’s excited about his major.”

Following college, Kindl said he hopes to get a job within athletics either at the professional or collegiate level, something of which he believes Marquette will help him achieve.

“Working with teams on how we can get them just even those tiny little games to give him the extra edge over the competition these days because that’s what really comes down to,” Kindl said.

This article was written by Johnnie Brooker. He can be reached at [email protected]