Volleyball setters connecting on and off the court 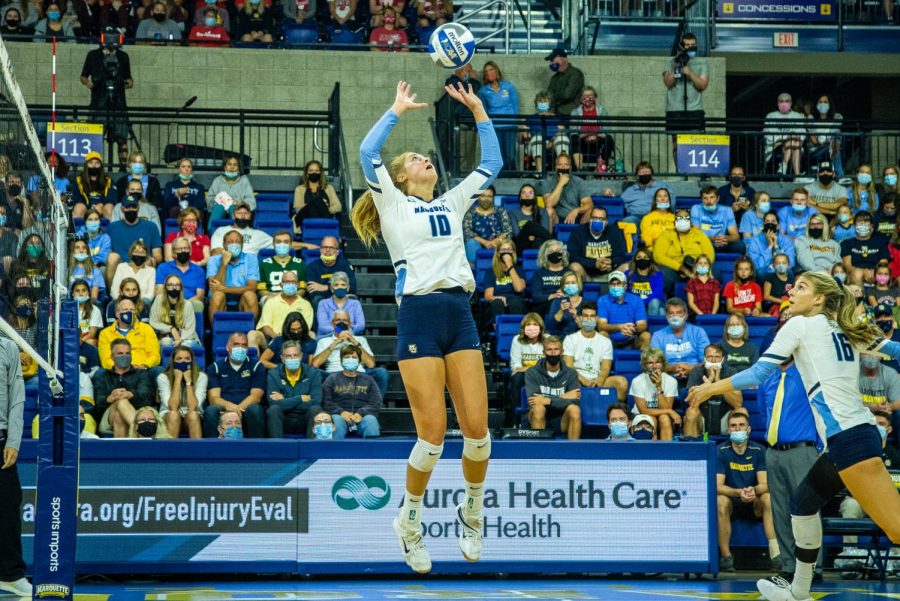 When attending  a NCAA volleyball game, fans can expect seeing one setter per side. But a hallmark of Marquette women’s volleyball head coach Ryan Theis’ program has been utilizing a 6-2 system that consists of six hitters and two setters.

“Middle’s have to hit off of two setters in practice and in games, so you can have really good chemistry with one of them and not as good chemistry with the other,” Theis said. “Outsides, similarly, it is coming out of Taylor’s hands and Claire’s hands, it comes out different, it does.”

The two up to this point in the season have amassed 549 assists.

While Mosher has been a setter her entire college career, Wolf didn’t start setting in college until she arrived at Marquette last season and only amassed 207 assists in her three years with the Green Bay Phoenix.

“It’s definitely been different from my experiences at Green Bay before coming to Marquette. I hadn’t really set since high school, so it’s been a couple years, but I think I always missed it (setting) at Green Bay,” Wolf said. “I think (coming to Marquette) just really allowed me to take the next step and enjoy playing another position.”

While moving back to playing setter, Wolf used Mosher as inspiration to improve her setting ability.

“Having another setter around, like Claire, who has had experience and has done it since she was very young, just gave me another role model to continue to improve on my skills and how I can always do better on different things like my hands or my positioning on the court each day,” Wolf said.

Wolf has had a strong run in her two years playing setter for the Golden Eagles, as she had more assists last season (256) than she had in her previous three seasons at UW Green-Bay. As of the time of this article, the 2020-21 All-BIG EAST Team honoree is on the verge of breaking that mark this season.

But beyond the stats for these two players, Wolf said that the two have developed a relationship on and off the court.

“Claire and I have a pretty good relationship,” Wolf said. “We’re pretty similar in some aspects, we both have tough majors right now so we can kind of connect in that aspect, but on the court I think that when we’re in our drills and sessions, we just go for it.”

Mosher said that in high school she played with her sister, Madeline, in the 6-2, and while this isn’t with her biological sister, Mosher said Wolf is like playing with a sister.

“From high school it’s not my sister setting, but I like to think of Taylor as a sister. We’re very similar, just like how me and my sisters are,” Mosher said. “I definitely think we mesh well together, I think me and Taylor have that special connection of being that similar.”

Beyond volleyball, Mosher & Wolf have been able to build that bond. Mosher agreed that the two related over tough majors.

“We both have similar majors, so we can bond over that. I think that we are both very soft spoken and kind of shy at times and she’s also from the Midwest and we both love the outdoors,” Mosher said.

Mosher said these little connections have helped build trust between the two, on and off the court.

“It just develops that trust between two people,” Mosher said. “I know I can trust Taylor on the court to get a kill when I’m setting her, and then I feel supported if I need help in any situation I know Taylor will always be there to help me.”