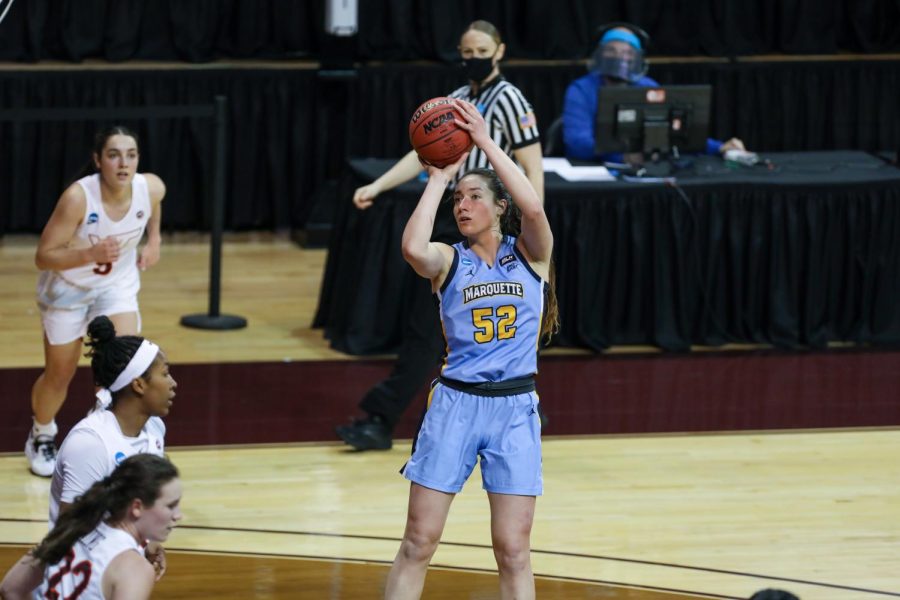 Redshirt junior forward Chloe Marotta (52) attempts a shot in Marquette's 70-63 loss to Virginia Tech March 21 in the First Round of the NCAA Tournament. (Photo courtesy of Marquette Athletics.)

After finishing runner-up in BIG EAST play last season, Marquette women’s basketball received its new slate of conference games for this upcoming season. The announcement came in a Oct. 2 in a press release from the BIG EAST Conference.

Redshirt junior Chole Marotta said that she and the rest of her team are excited to play the BIG EAST this year.

“We’ve been waiting to play the BIG EAST for a long time now, it kind of got cut short a little bit last year, so to have a full season and schedule come out was great, I’m really, really excited,” Marotta said

Marquette will open conference play with a two-game home stand against Xavier Dec. 3 and Butler Dec. 5.  Last year, Xavier finished in ninth place in the BIG EAST with a 2-8 conference record and am overall record of 5-10. Meanwhile Butler, finished with a record of 3-17, 3-15 in BIG EAST play and placed tenth in the standings.

The Golden Eagles’ first road game is against Seton Hall Dec. 19. The Pirates finished behind the Golden Eagles last year, placing third in the conference with a record of 12-5. In the most recent matchup on date, Seton Hall defeated Marquette 77-66 behind the efforts of graduate student Andra Espinoza-Hunter’s 25 points. Graduate student forward Lauren Van Kleunen led Marquette with 13 points.

Then two days before New Year’s Day, Marquette will travel back east to Storrs, Connecticut to face the UConn Huskies. In their first season back in the BIG EAST last year, the Huskies went undefeated in conference play. UConn defeated Marquette 73-39 in the BIG EAST Championship Game.

Marotta said that the game against UConn is one that has been circled on the calendar already.

The Golden Eagles first game following the New Year will be a trip to Omaha, Nebraska Jan. 7 to face the Creighton Blue Jays. Last season, Marquette went 3-0 against Creighton, including a 64-59 win in the second round of the BIG EAST tournament.

After the road trip, Marquette will return home for a three-game homestand, including their first meeting of the I-94 rivalry DePaul Jan. 12. Both teams split the regular-season series last year, each winning on the road.

Georgetown and Villanova will round out the home stand Jan. 14 and Jan. 16 respectively.

Marquette’s biggest stretch of road games will come from Jan. 21 through the 30th when they visit Xavier, Butler and St. John’s with a home game against Seton Hall mixed into the nine day stretch.

To round out the regular season, Marquette will play three of their last five games on the road with trips to DePaul, Georgetown and Providence.

The Golden Eagles will conclude the season with a game at home against St. John’s Feb. 27.

Head coach Megan Duffy said she is ready for the season to get rolling and is excited for some of the signature matchups this year.

“We’ve got a couple of big marquee matchups that will be on FOX against UConn, DePaul will be reloaded and back at it right down the street from us. Just excited to see it on paper…we got some great challenges going down (this year),” Duffy said.

The Golden Eagles will play in seven nationally televised games this season across the Fox Sports Networks.

Marquette will open up the season in 35 days against Alcorn State Nov. 9 at the Al McGuire Center.