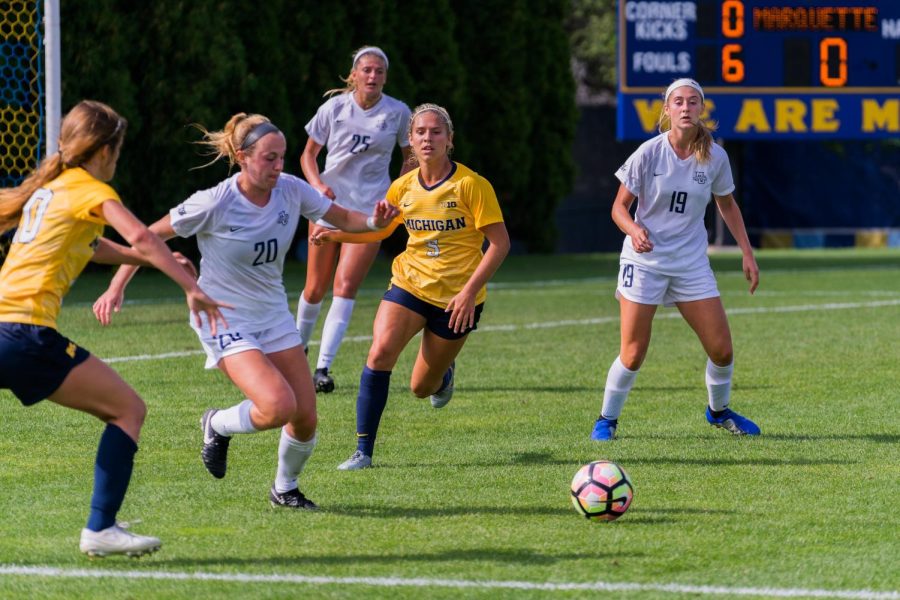 Athletes face pressure both on and off the field. Marquette Wire stock photo

Competing at the highest level is what most athletes dream about growing up. But when they get to Division I, performing to the best of their abilities under substantial pressure, while balancing school and sports can be challenging for many student-athletes at Marquette.

Mental health includes a person’s emotional, psychological and social well-being. Student-athletes who are stressed about the daily pressures and living up to the expectations put on by others should know they are not alone and that there are others who are here to help.

“I think of mental health as an umbrella term to describe our sense of emotional well-being,” Hoff says. “I support the conceptualization that mental health exists on a continuum, and we all move up and down the continuum based on our levels of distress, and the internal and external resources we have to manage that level of stress.”

“Each athlete is unique, and their experience of collegiate sport is their own,” Hoff says. “Athletes often set goals for themselves, and they are relentless in their pursuit of goals, so certainly pressure or a desire to succeed for themselves, their coaches and their teammates does exist with D1 athletes across the country.”

No matter the sport, challenges arise for many different student-athletes at Marquette in their own way.

Women’s soccer graduate student defender Maddie Monticello says she tries flipping the script on the pressure by facing it, rather than succumbing to it.

“I have a different look at the pressure given by fans, whether it’s at a tough away game or even in front of Marquette fans at a home game. I think it’s the coolest pressure to go against,” Monticello says. “I try to tell the younger girls on my team that this is pressure that everyone has to face and that took me a while to figure out.”

Monticello believes the biggest way to cope with these pressures is by first accepting that it is a normal occurrence for athletes like herself.

“With being a student-athlete, those pressures are there daily and they’re prominent and I think the first step of dealing with those pressure is accepting them,” Monticello says. “I’m really big into taking a deep breath and taking a step back while looking around and seeing I get to do the things I love with the people I love.”

Hoff seconds Monticello, saying it is important for student-athletes to be aware of their situations by coming out and turning toward professionals if they’re ever overwhelmed by certain factors.

“Athletes can start by acknowledging the importance of maintaining all aspects of wellness. First and foremost, it’s important for athletes to pay attention to their emotional well-being and appreciate that attending mental health is a natural part of training and in life,” Hoff says.

Men’s soccer senior goalkeeper Cedrik Stern says these challenges can be brought on by different factors, including playing in a different country.

Stern, who originally hails from Friedberg, Germany, has had the challenge of adapting to life in a different country while also trying to balance that with school, soccer and social life.

“When I first came here, I had no idea what was going on and I didn’t really know what to expect,” Stern says. “There were so many things that were new to me, but as time went on, I found it was so easy to fit in which has made it easy to connect with other people and with the city of Milwaukee.”

As for athletes such as women’s basketball graduate student forward Lauren Van Kleunen, basketball itself is her way of relieving some of the stress she endures being a student-athlete.

“If I’m ever feeling stressed about something happening during school, I like to just be on the court and have fun with what I’m doing,” Van Kleunen says. “The excitement of practice just takes the stress away and I like to just live in the moment, so I would say it doesn’t necessarily get rid of my stress all the time, but it definitely helps limit it at times.”

Playing under the pressure in front of hundreds or even thousands of fans, in some instances, can be a lot for some student-athletes, but for Van Kleunen this is just another part of the game.

“The fans are part of the reason that make our games so much fun to begin with and was something that we were definitely missing last year due to COVID-19,” Van Kleunen says. “I think they’re even more important now after we saw what it was like playing without them in the stands.”

There’s no denying how exciting sports can be for players and fans, but at the end of the day, individuals like Hoff are there to ensure these student-athletes have their mental health as their priority.

“Most importantly, and I cannot emphasize this enough, attending to mental health is about health and sense of well-being, regardless of performance,” Hoff says. “Athletes are human beings that are passionate about and dedicated to a competitive sport, but that is not the only aspect of their identity. They have lives outside of their sport, too.”

This story was written by Sam Arco. He can be reached at samuel.arco@marquette.edu or on Twitter @SamArcoMU.