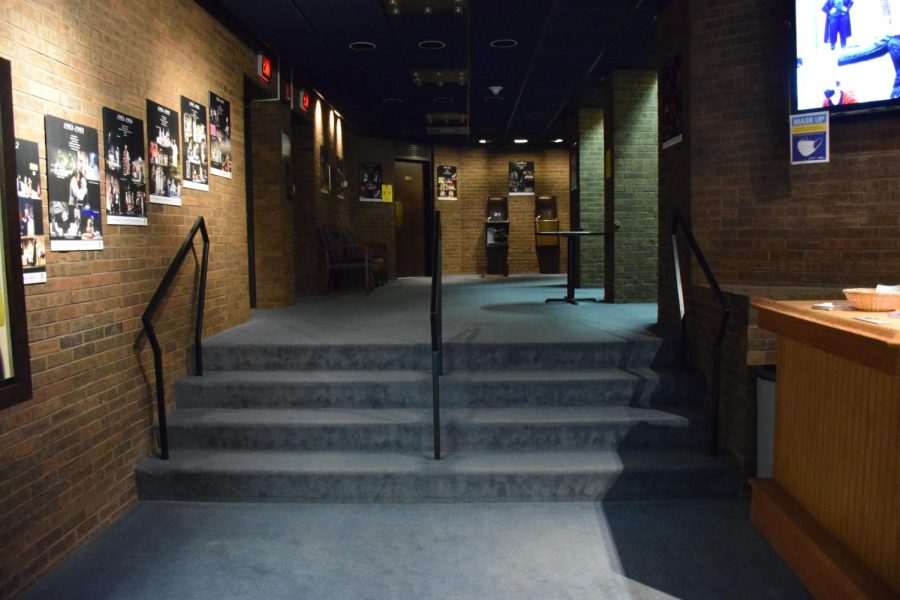 Helfaer Theater lacks an elevator for those with disabilities.

Gilli Leonard, a senior in the College of Communication, was a first-year student when she was put in a wheelchair for a month due to a bulging disk pinching her sciatic nerve. In that time, what was once an effortless walk to class transformed into a dangerous venture.

“Wheeling myself down the street was a major challenge because all of the sidewalks are slightly slanted,” Leonard says. “I would have to roll with one arm down the entire street of Wisconsin because if I rolled with both arms, I would go into the street.”

Marquette’s outdoor landscape isn’t the only space presenting obstacles for individuals with disabilities, as Leonard also struggled to maneuver indoors.

Issues surrounding accessibility were thought to be resolved with the enactment of the Americans with Disabilities Act of 1990, which is a civil rights law prohibiting discrimination on the basis of disability.

What was once inaccessible to individuals with disabilities transformed after ADA; sidewalks and streets required curb ramps, public transportation implemented wheelchair lifts, and public, along with private entities that operated as places of public accommodation, now needed to create an accessible layout for their buildings.

However, more than thirty years later, Leonard said inaccessibility has persisted at Marquette, as initiatives for a more inclusive environment come at a cost.

The 1990 ADA was an unfunded mandate, meaning states, local governments and private businesses have to make accommodations on their own dime.

“They refuse to make the older buildings ADA compliant because it would mean spending more money,” Leonard says. “People have been injured because of their lack of initiative.”

Vice President for Planning and Facilities Management, Lora Strigens, says the costs of reforming Helfaer Theater are not “insignificant.”

“They [Helfaer Theater] are being considered in the context of overall investments that need to be made to our physical campus to address health, safety and welfare issues, deferred maintenance needs, and other renovations and improvements,” Strigen says.

Drawing on the dangers within Helfaer Theater’s infrastructure, Leonard says that a faculty member who had knee surgery was forced to walk outside to go to the bathroom on the theater’s first floor since there is no elevator in the building. As a result, the faculty member fell.

“We’ve been asking for an elevator in the theater for years and they’ve never listened to us,” Leonard says.

Straz Hall, where a majority of business classes are held, has also been criticized for its small bathrooms and slow elevator, however, these obstacles have not been addressed since Strigens says the College of Business will be vacating Straz once the new business building is complete. The new facility will reside on the corner of Wisconsin and 16th street.

“This creates a great opportunity to look Straz when it is renovated for its next use and evaluate all aspects of health, safety and welfare as we make decisions about upgrades and modifications to the building,” Strigens says.

Despite the university’s lack of initiative on the Helfaer Theater and Straz Hall, Strigens says all buildings on campus meet ADA guidelines “for the time of construction.” For buildings that are renovated, the university makes updates to meet current requirements “to the extent possible.”

The 1991 ADA standards for accessibility, which is implemented within the 1990 ADA legislation and is what Strigens refers to when stating the building’s time of construction is different from the ADA’s updated standards in 2010.

One of these 2010 standards is having accessible routes that coincide with those of the same area as the general public, however, this excerpt in the 1991 standard only states that these routes should be “at the maximum extent feasible” to the general public. In Helfaer Theaters case, the closest accessible access is at the back of the building.

Hopes for accommodations beyond the Helfaer Theater are extensive, as Leonard knows many parts of campus are not compliant with the 2010 standard and has experienced this exclusion first-hand when she was in a wheelchair.

“Getting into buildings was also a major challenge because in most cases, I would have to wheel around the entire building just to get into the accessible doorway,” Leonard says.

Leonard also had challenges with handicap buttons, as they often would malfunction. She also says the sidewalks are “slightly slanted” which caused her wheelchair to spin out of place.

Looking back on her experience, Leonard understands why she rarely sees individuals with paralytic disabilities on campus.

“Marquette doesn’t accept them because they know the campus is not adequately suitable,” Leonard said.

However, creating an inclusive campus goes beyond physical adjustments, as Enaya Othman, associate professor in languages, literature and culture, says the university also needs to keep the mental wellbeing of students in mind when making decisions regarding accessibility.

“Making the environment accessible does not only mean adjusting the physical space, it also — even more importantly — concerns social spaces,” Othman says. “First of all, as individuals, our perspectives and attitudes should be inclusive with regard to different groups.”

Othman teaches the concept of disability as an identity, concept and minority issue in a section of CORE 1929, which is a class where students must “compare and contrast the approach of three different disciplines to a common theme.” All students are required to take CORE 1929 at one point in their academic career, however, topics differ depending on the section.

In the class, Othman introduces disability as a constructed concept, which differs from an impairment.

“While I refer to a biological, medical or physical condition by impairment, disability is created as a result of the stigmas and stereotypes based on the impairment,” Othman says.

In this way, Othman says having a mental illness or disorder can be considered an “even worse” situation because social and cultural norms marginalize it in a stronger way.

“Disability is an issue of identity and minority rather than biology,” Othman says. “For example, a person with a physical impairment will not feel disabled because he cannot enter a building as much as he would feel due to social norms of ableness.”

In an attempt to become a more inclusive campus towards different groups, Othman says students must be “aware” and “alert” when interacting with others, as disabilities aren’t always visible, specifically surrounding mental health.

“A lot of students suffer alone due to the stigma associated with mental health and seeking help from such centers,” Othman says. “The possibility that mental health can be a hidden issue of our students should always be present in our minds, which is the actual challenge.”

In fact, experts estimate that around one in four people has treatable mental or emotional difficulties, but up to 75% of Americans don’t seek the help they need.

Therefore, Othman says disability needs to be addressed from both an institutional and individual lens.

Looking forward, Leonard hopes issues surrounding the stigmatization of those with disabilities will lessen on campus, as once she was able to regain her walking ability, students no longer recognized her.

“They just saw me as the girl in the chair,” Leonard says.