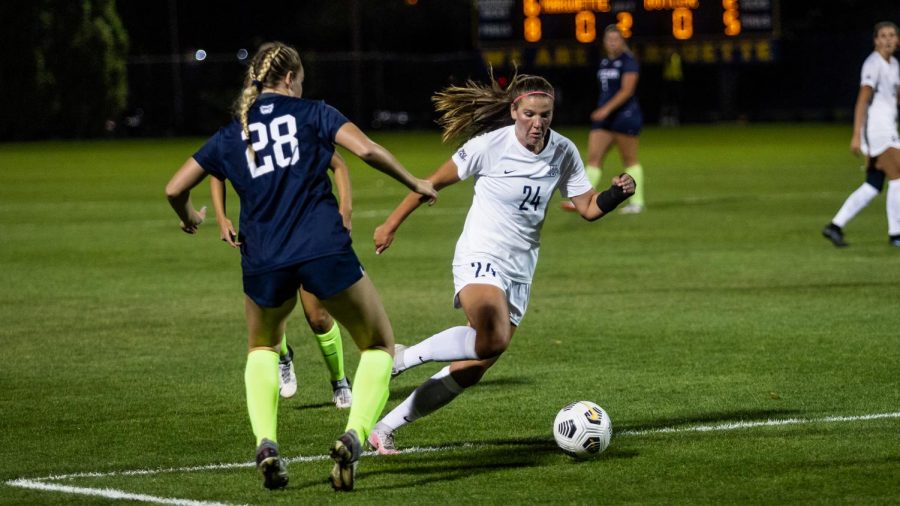 Katrina Wetherell (24) makes a move on a Butler defender while heading to net in the Golden Eagles' 1-0 loss to the Bulldogs Sept. 23. (Photo courtesy of Marquette Athletics.)

“Extremely proud of the total team effort it took tonight and the belief we had in each other,” Marquette head coach Frank Pelaez said in a statement.  “Creighton is a fantastic team with a number of talented players and we are happy to come home with three points.”

As it has been a season long trend, the Golden Eagles came out striking in this one.

In the fifth minute, graduate student defender Kylie Sprecher crossed on into the box from the right side of the field. Then redshirt junior midfielder Katrina Wetherell headed the service cross to put the Golden Eagles up 1-0.

For Wetherell it was her third goal of the season and eighth career goal.

Then in the 33rd minute, Creighton had an opportunity to tie it when Kennedy Ruark took a shot on next but Marquette redshirt first-year goalkeeper Mikki Easter made the stop.

Creighton would have one more opportunity to tie the score before halftime in the 41st minute but Hitomi Yamaue’s shot sailed far right.

Despite being outshot 6-2 in the half by Creighton, Marquette entered the halftime break with a 1-0 lead.

The second half of the match was a defensive battle amongst both teams.

Both teams would have multiple scoring chances but the opposing defensive kept the ball out of the back of the net.

Neither team would get a goal, even though there were some chances. Easter would stop all 3 shots that came her way not allowing the Blue Jays to get one on the board.

Easter recorded her fourth shutout of the season, finishing with three saves on the night. Meanwhile Keelan Terrell finished with one save while giving up the lone goal,

With the win, the Golden Eagles now lead the all-time series against the Bluejays 6-5-3.

This article was written by Matthew Valente. He can be reached at matthew.valente@marquette.edu.