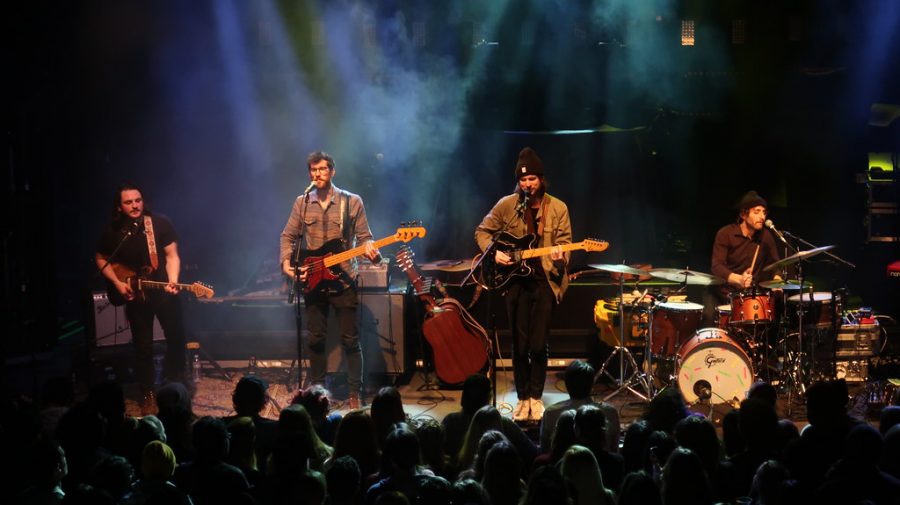 A hush fell over the murmuring crowd as a piano melody rose out of a smoke-obscured stage illuminated by blue lights. Lead singer Matt Quinn emerged as a silhouette belting “Strangers,” the lead single off of Mt. Joy’s 2020 album “Rearrange Us.” Rain poured on the roof of the pavilion as the screaming crowd danced along.

The band then paid tribute to their very first song, “Astrovan,” as Sept. 22 was their five-year anniversary. Rainbow flashing lights painted the crowd as they jumped around to “Astrovan,” or as Mt. Joy describes it, “a goofy song about a doobie-smoking Jesus and chasing your dreams.”

Pianist Jackie Miclau stole the show in her solo during “Let Loose.” While many rock pianists may fly under the radar, she has an incredible ability to weave the piano into any song and make it stand out, defying the conventional classy piano sound.

After dominating every second of “Sheep,” Matt Quinn swapped his guitar for an acoustic and stirred the audience by saying that their next tune is one they never play in front of a crowd. Not many people seemed to know the absolute masterpiece that is “Witness,” but the emotional jam surely tugged at the heartstrings of all those who swayed to its distressed, honest lyrics.

The group’s popular song “Julia” faded beautifully into a cover of Bill Withers’ “Ain’t No Sunshine,” and just when the crowd thought it couldn’t get better, lead guitarist Sam Cooper strummed the opening riff of The Gorillaz’ “Clint Eastwood,” signaling the screaming fans to respond with the opening lyrics “I ain’t happy, I’m feeling glad.” The two covers are very different songs, yet mashed into something magnificent that only the talent of Mt. Joy could perfect.

The band ended the night with none other than “Silver Lining,” a single that landed at the top spot of the Billboard Adult Alternative Airplay, also known as Triple-A, charts in 2017. As a spotlight shined on Matt Quinn strumming the anthem’s intro chords, the crowd applauded in a bittersweet fashion – sweet for the love of the song and bitter for knowing it would be the last of the night. Glasses and joints flew in the air in accordance with Quinn’s lyric “drink your wine, smoke your weed.”

The performance left the congregation in awe at the perfect blend of new music sneak peeks, covers and original classics. Those who were already Mt. Joy fans were reaffirmed and those who did not know the group just found their new favorite band.

This article was written by Clare Lindstrom. She can be reached at clare.lindstrom@marquette.edu.