WSOC rebounds after loss to Butler, takes down Villanova on the road 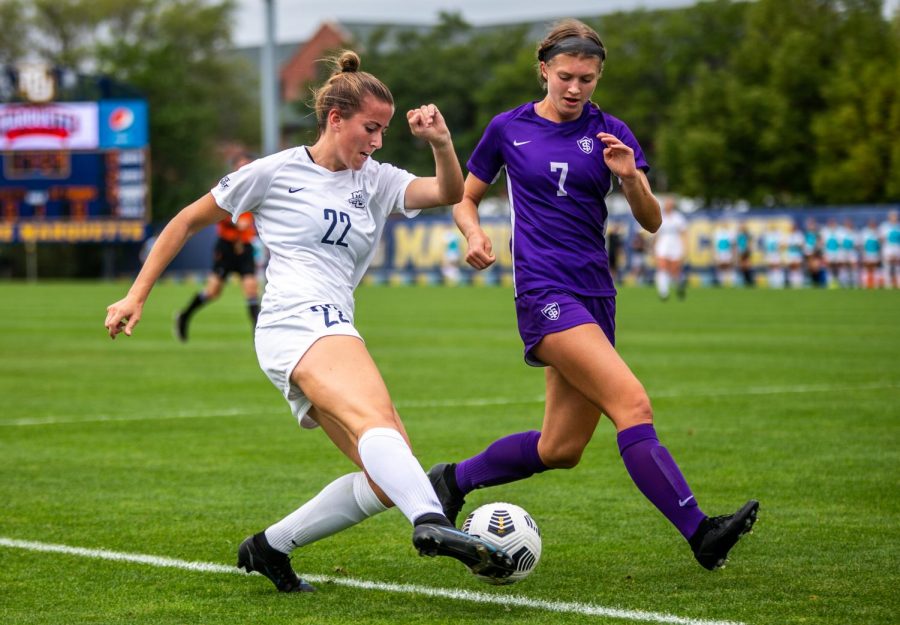 Elsi Twombly (22) makes a move heading to goal on a University of St. Thomas defender in Marquette's 3-0 win Sept. 12.

The win marks the Golden Eagles first win in BIG EAST play on the season.

Following a season-long trend, Marquette came out of the gate aggressive.

In the 16th minute, redshirt sophomore Hailey Block got an opportunity to put Marquette up first but Villanova senior goalkeeper Megan McClay came up with the save.

The Wildcats would get on the board first as deflected ball off a Marquette defender found its way into the back of the net.

Marquette responded 74 seconds later when redshirt first-year forward Elsi Twombly got a foot on graduate student Kylie Sprecher’s cross pass and got it past McClay. It was Twombly’s second goal of the season.

Nine minutes later, the Golden Eagles would take the lead when redshirt junior midfielder Rachel Johnson found the back of the net from 20-yards out.

Marquette was not done in the first half.

In the 34th minute, first-year forward Maggie Starker capitalized on a Villanova miss pass to put the Golden Eagles up 3-1 before halftime. For Starker, it was her third goal of the season and second goal in a matter of three games.

It was the third time this season that the Golden Eagles went into the locker room with a lead.

Villanova would test Schill early in the second half, but she and the Marquette defense denied the Wildcat attempts.

In the opening minutes of the second half, Marquette had an opportunity to increase their lead as Villanova was called for a foul inside the box resulting in a penalty kick. Redshirt junior midfielder Katrina Wetherell took the shot but McClay came up with the stop.

The Golden Eagles outshot the Wildcats 18-9 for the match, including eight shots on net.

Easter and Schill would combine for five total saves on the day with Easter snagging two saves and Schill with three in the second half.

Marquette (5-4, 1-1 BIG EAST) will round out their two-game road trip on Thursday in Omaha, Nebraska as they visit Creighton at 7 p.m. CST.

This article was written by Matthew Valente. He can be reached at matthew.valente@marquette.edu or on Twitter @emjavee1.