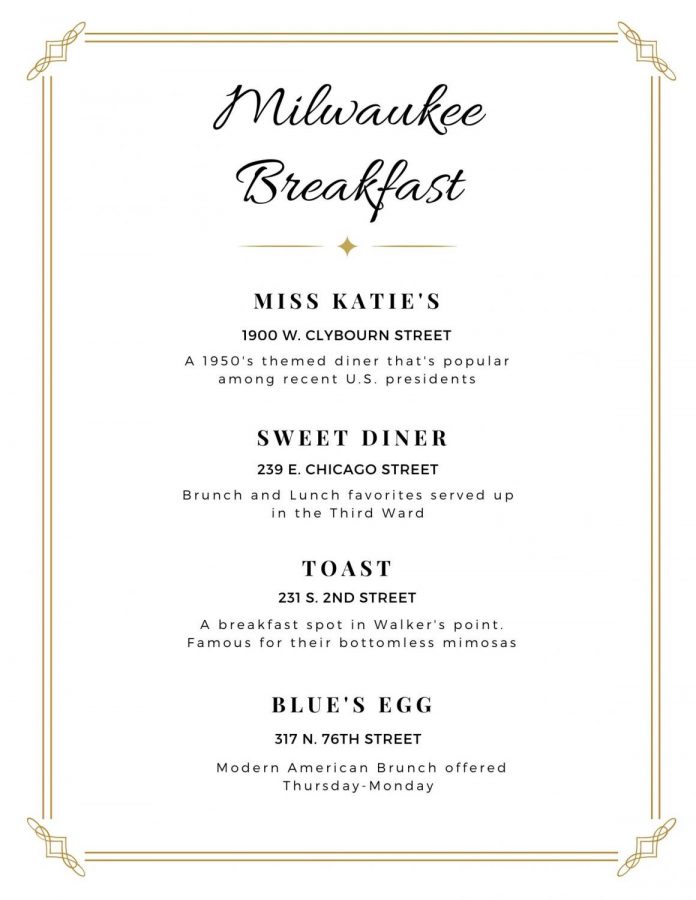 There are many breakfast spots located near Marquette's campus

September is Better Breakfast Month, and students and faculty at Marquette are up for the celebration. Many people are enjoying breakfast in their own style.

For many people, breakfast is one of their favorite meals of the day. Tracey Sturgal, a professor in the College of Communication, is one of those people. She recommends having a veggie omelet with hash browns. She spices her hash browns up with red and green peppers and a bit of garlic.

But Russel Sanchez, a senior in the College of Nursing, usually starts his day off with two eggs, yogurt, granola and water.

“I used to like scrambled [eggs] because it tasted better. Then I found out that over easy is the easier way to cook it so I go with that,” Sanchez said.

Sanchez dresses his eggs with a little bit of Frank’s Red Hot, while Professor Sturgal dresses hers with salsa or sriracha.

There is a reason why so many people are having eggs for breakfast. Eggs are abundant with Vitamin D and protein, and they are rich in antioxidants which can help prevent eye disease, including cataracts and macular degeneration.

While Sanchez and Sturgal have kitchens, many underclassmen are unable to make their own meals. Sam Gerovoy, a first-year student in the College of Business Administration, goes to the Alumni Memorial Union in and gets a morning intake of carbs and dairy at Einstein’s Bagels.

“I got a plain bagel with cream cheese … it’s really good,” Gerovoy said. “You can even get bacon on it.”

Starting your day off with diary can give you access to calcium, which is good for your bones, and Vitamin B12, which helps keep blood and nerve cells healthy.

Traditionally historically?, Americans had light breakfasts according to who, but it is now recommended to have a heavy breakfast. This gives you the energy you need for the day and maximizes calories.

For some people a lighter breakfast is all that they need. Larry Birkett, associate director of the Spirit Shop, usually makes himself a latte from home and then starts his day. Birkett isn’t alone in getting his caffeine kick, coffee is the second most popular drink in the world.

Besides cooking at home and eating food in the dining hall, Milwaukee offers many options for sit-down breakfasts. Daniel O’Hear, a first-year in College of Engineering, is a Milwaukee native and has his own take on dining in the 414.

Miss Katies dinner has seen former President Bill Clinton and former first lady Michelle Obama visit. Blues Eggs is a large supporter of the Milwaukee area and community. Ma Fischer’s was created by George Panos who was a Canadian immigrant in the 1960’s.

Typically when O’Hear goes out to breakfast he gets pancakes with a side of bacon and eggs.

Birkett has lived in Milwaukee most of his life and has found his go-to breakfast spots.

“Alley Boys, in Walker’s Point. They make their own bagels, they make everything in house. They have breakfast sandwiches, they do an awesome smoked whitefish spread, you name it, they have phenomenal breakfast there,” Birkett said.

Shantia Carson, a junior in the College of Arts & Sciences, is also a Milwaukee native. She recommends Toast and Sweet Diner.  Which are both on the east side of town, in the Third Ward region.

Toast offers a variety of meals including pretzel french-toast with peanut butter maple syrup.  Sweet Diner offers a classic brunch with a trendy but cozy atmosphere.

Some faculty are even celebrating Better Breakfast Month by having it for dinner.

“What I’ve been starting to do for dinner is that I’ll scramble up eggs and put whatever veggies I have around in it.” Sturgal said, “then when it’s almost done I’ll put a tortilla on it, flip it and fold it, almost like a burrito.”

Better Breakfast Month was introduced in 1951, when the Cereal Institute recommended a strong breakfast. The reason why it takes place in September is because many workers and students are returning to their jobs and classes. And in order to make it a fulfilling day they need a fulfilling meal.