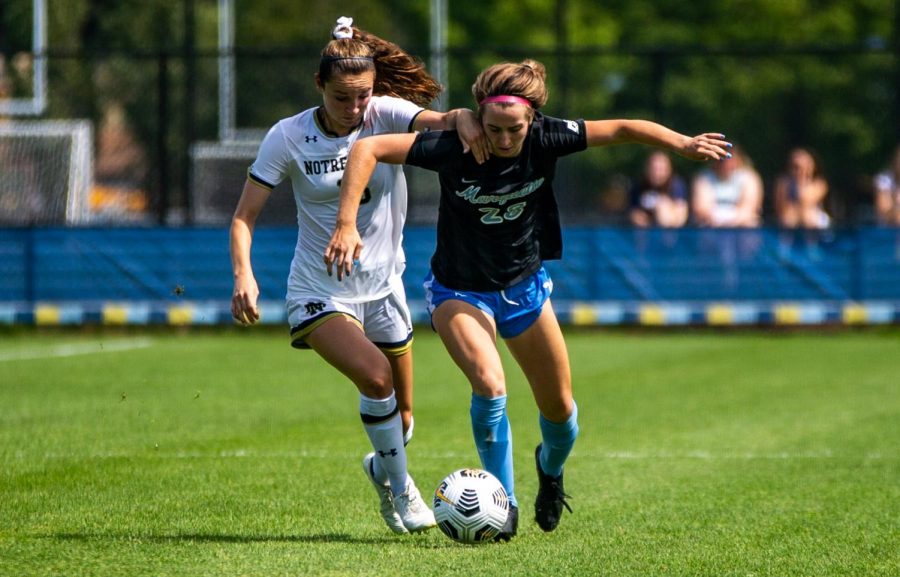 Maggie Starker (28) was named the 2021 Wisconsin Gatorade Player of the Year.

“To be honest, she was never about her stats, she was always about wins,” Dubinski said. “There were games she did not have a point whether it was a goal or an assist and she did not seem to care because we got the win and that is all that mattered to her.”

Starker, who has two siblings including a twin brother, said she was first introduced to the game at four years old. It was watching her sister compete at Division III Washington University in St. Louis when she fell in love with the sport.

“Growing up, watching her and the process, I thought it was like the coolest thing, so I’ve always wanted to,” Starker said. “I think I started at four, just to get me out of the house. I have a twin brother and my parents did not want to drive me to different practices than him, so I was on a boys’ team until U13, so I think that really shaped me into my player.”

Excluding her junior year due to COVID-19, Starker finished her high school career with 73 goals and 60 assists, which ammases to 206 career points.

“As a coaching staff we were never into blowing out teams and leaving players like Maggie in to rack up stats,” Dubinski said. “I think if we were, her numbers would even be more gaudy than they are. She understood that and just did what she needed to do to take care of business and move on to the next.”

Dubinski, who is also the boys soccer head coach at Whitefish Bay, mentioned Starker would show up at the boys’ practices during the off-season — as girls’ soccer is played in the spring in Wisconsin — to get work in.

“She would show up and work on shooting when we were doing different drills,” Dubinski said. “She always knew where she needed improvement and just worked at it that much harder.”

In addition to earning her conference player of the year and All-State First Team honors, Starker was named the Wisconsin Gatorade Player of the Year during her senior season.

“As the season went on, those numbers are super impressive, and that is just in three years,” Dubinski said. “I was just super excited for her. She was a semi-finalist her sophomore year and knew that she had to continue to work and continue to improve because there were younger players not only on her team but in the state that were qualified to be in the running for that award.”

“She is somebody that we could always count on, on the field and off, getting her teammates and herself prepared for the season,” Dubinski said. “Was always willing to drop whatever she was doing to help out a teammate or us coaches.”

Dubinski said throughout his 20 years of coaching, he has never come across someone who has a strong work ethic as Starker’s.

“She is one of the first to show up to practice and one of the last ones to leave,” Dubinski said. “Always trying to improve her craft and get better each and every day. She isn’t the biggest person on the field, but she plays like she is. She is super scrappy, super tough, somebody that never backs down to the competition.”

Being just a 15 minute car ride from campus, Starker said she’s always been fond of Marquette and its program.

“Living in the city you just hear a reputation about Marquette and how good of a school it is, and a lot of other Whitefish Bay kids have gone here and just loved it. So it’s just a very good reputation where I live,” Starker said.

Fast forward to March 2020, right before the start of COVID-19, when Starker attended Marquette head coach Frank Pelaez’s first college soccer ID Camp after he took over the helms of the Golden Eagles’ program in December of 2019.

Starker shortly committed to Marquette after that.

“They were just great people, I loved their attitudes, what they were doing, how they were changing the programs. I really felt welcomed and a lot of the girls were there. It just felt right,” Starker said.

Starker said she was able to start building a relationship with Pelaez and his staff before arriving to Marquette.

“(Then) they came to watch me during my high school season, they were really supportive,” Starker said. “They came to every game they could so it was nice to be in the city and be close so they could come watch me.”

Starker made an immediate impact in Marquette’s season opener against Central Michigan Aug. 19.

In the 40th minute, Starker fired one past Chippewas goalkeeper Allison LaPoint off a set piece by redshirt first-year Elsi Twombly for her first collegiate goal. Starker also had an assist in the match.

“I think it just all came together, all the hard work and extra hours I have put in, my entire family was here so it was kind of just like a surreal moment,” Starker said. “I know it was just like the starting point, but it was a good start, kind of set the tone for the rest of my years here.”

Then five games later against the University of St. Thomas, Starker recorded goal two of the season when she put teammate Kate Gibson’s pass to the back of the next off a header.

Dubinski said he was in attendance for both of Starker’s goals.

Starker said the upperclassmen on her team have helped her adjust to the college level of competition.

“I think all the upperclassmen they are just so supportive they really took us under their wings and showed us the ropes and coming in was like a whole new experience, so it was really nice to have, it was not a specific person, I am like a little sister to them so it’s really cool.”

Starker added her third goal of the season Sept. 26 in Marquette’s 3-1 victory over Villanova.

Though Starker’s career at Marquette has just begun, she said she has one goal for the remainder of the season, a goal that wouldn’t come to a surprise for someone like Dubinski.

“We talk a lot about team not I, so I think it’s just our team doing well all playing together, getting better each game is really important,” Starker said. “Learning from what we did not just the result, but what happened in the game and building from every game and getting better.”

This article was written by Kelly Reilly. She can be reached at kelly.reilly@marquette.edu or on Twitter @kellyreillyy.