Men’s soccer back on track with road win at No. 19 Seton Hall 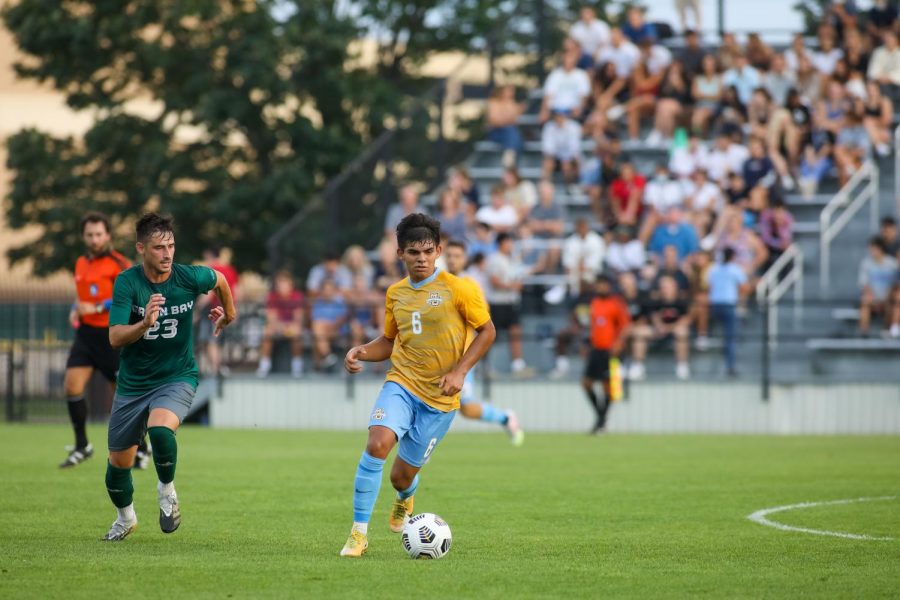 Marquette men’s soccer is back to winning ways as the Golden Eagles defeated No.19 Seton Hall 3-1 Friday night in South Orange, New Jersey.

After dropping four-straight games prior to tonight’s matchup, Marquette secured a much-needed road victory over the Pirates for their first BIG EAST win of the season.

“This was a very disciplined win. We stuck to the game plan and were very resilient,” Marquette head coach Louis Bennett said in a statement. “Seton Hall is a powerful team and they’re a team that can burn you, but that was how we played today. We can out and scored three goals on the road against a very good team, I’m very proud of what we did.”

In the 12th minute, first-year midfielder Edrey Caceres opened the scoring for the Golden Eagles, as he fired a free-kick well outside the box over the head of Seton Hall goalkeeper Andreas Nota to give Marquette an early 1-0 lead.

Caceres’ second goal of the season ended a 400-minute scoreless drought for the Golden Eagles, dating back to the team’s 2-1 victory over Kansas City on Sep. 3.

Then 14 minutes later, the Golden Eagles had a chance to build their lead. Redshirt junior defender Gabe Kash crossed one into the box that found redshirt defender Alex Mirsberger but Nota reacted quickly to deny Mirsberger to keep the score 1-0 at the time.

A few minutes later in the 34th minute, however, Marquette would find their second goal when redshirt junior forward Lukas Sunesson headed home redshirt junior midfielder Zyan Andrade’s cross from outside the box in the bottom left corner of the net.

Sunesson’s second of the season gave Marquette a 2-0 lead going into halftime.

Marquette’s second half would not be much different.

Despite being outshot 11-4 in the first half, Marquette’s defense stood firm and showed shades of their stellar play from last season, denying the Pirates any goals despite controlling most of the possession.

Seton Hall, who came into tonight’s matchup with the sixth-most goals (19) scored in the country, scored only one goal in a match for the first time this season.

In the second half, neither side had a clear-cut chance until the 70th minute, when Andrade found Caceres wide open in the middle of the box during a counterattack as the first-year calmly slotted the ball off the post and into the net.

“When Edrey’s at his best, he’s one of the best players in the league,” Bennett said. “He’s calm when some people are not calm, and he’s surprisingly mobile defensively. It’s very rare to have a two-way player who is so good with the ball offensively, but who still manages to get it done defensively, but he does. This was a great performance from him.”

Seton Hall would add a late goal with just 10 seconds left in the game by sophomore midfielder Ian Albuquerque to avoid getting shutout for only the second time this season.

Despite being outshot 17-8 on the night, Marquette had five shots on goal while holding Seton Hall to only two on target.

With the loss, Seton Hall drops to 0-2 in BIG EAST play after being picked to finish second in the BIG EAST Coaches Preseason Poll.