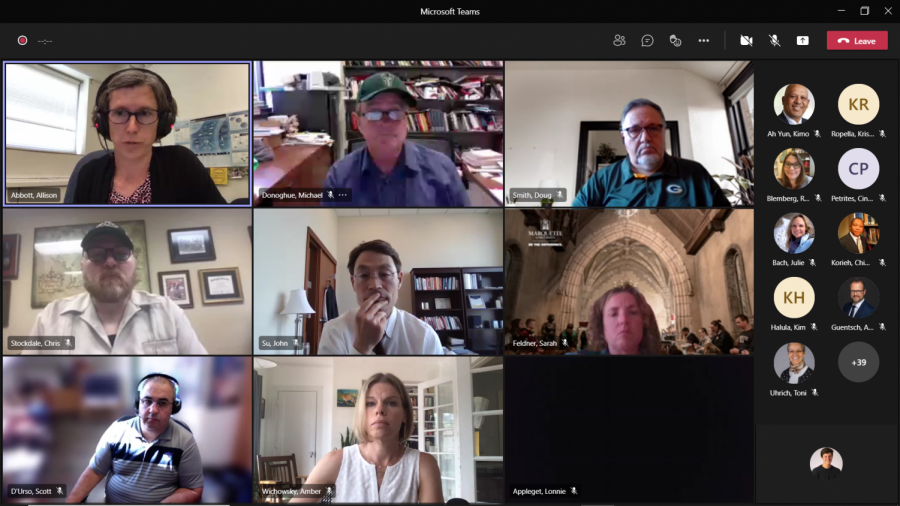 The University Faculty Committee on Budgets and Financial Planning was unanimously approved by the University Academic Senate at their Sept. 20 meeting.

Before it’s officially adopted, the committee still must be approved by both Provost Kimo Ah Yun and University President Michael Lovell.

The committee would review the administration’s proposed budget each fiscal year prior to its adoption by the board of trustees. It would be tasked with identifying, “… critical budget or financial planning matters for examination or review.”

After being asked, Ah Yun expressed his and Senior Vice President and chief operating officer Joel Pogodzinski’s support for the committee.

“I endorse and am in support of the committee. I’m aligned with Joel in that as well. I’ve been in favor of better ways of getting aligned since the beginning,” Ah Yun said.

However, as this was just a verbal endorsement at the meeting, both Ah Yun and Lovell will still have to officially approve it. To pass through UAS it needed two-thirds approval, which it received with the unanimous vote.

“Marquette University remains committed to shared governance and is hopeful that the new University Faculty Committee on Budgets and Financial Planning will work thoughtfully and collaboratively with the university’s existing Financial Planning and Review Committee, which includes faculty representatives,” Kevin Conway, a university spokesperson, said in a statement.

Though the committee had support from multiple parties in the form of the unanimous vote by the academic senate and Ah Yun’s public approval, there were still some concerns raised. Particularly about the involvement of students, both graduate and undergraduate, in the budget review process.

“Students have been forgotten about in this. It’s only a mechanism for faculty to have a greater voice. Students should be the most important thing that we’re talking about,” Timothy Houge, a graduate student in the College of Arts & Sciences, said.

UAS chair and associate professor of biological sciences Allison Abbott said that there was incredible “spirit” from both the administration and faculty in developing the proposal for this committee.

“We were able to find compromises where we didn’t see eye to eye and get to a middle ground for the proposal that we all can make work,” Abbott said.

“We’ve done a good job of finding a balance with openness and transparency while acknowledging the need for confidentiality regarding sensitive information,” Abbott said.

Abbott did note that they hope to keep confidentiality to a minimum. The committee proposal was put together with feedback and collaboration from both the UAS and administration.

The committee would then be expected to report their findings to both the UAS and the University Financial Planning and Review Committee. The proposed committee would also be allowed to offer advice directly to either the provost or president and additionally would respond to requests from them.

This is an entirely new committee though, and Abbott noted that it would be a “work in progress” and there may be items that would have to be revisited if needed.

The committee would be chaired by an elected tenured faculty member and meet monthly. An annual report would also be delivered to UAS. Although prior to presenting to the entirety of UAS the committee would need to receive approval from the Vice President for Finance “to ensure the protection of sensitive information.”

Such “sensitive information” would be specified to the committee members at the time of its presentation. But, any information that is only connected to Academic Affairs would not be considered sensitive and therefore would not require this same type of approval.

“Our goal is responsible and judicious fiscal management that is forward-looking and ensures that we can deliver Marquette’s transformational Catholic, Jesuit education for generations to come,” Conway said.