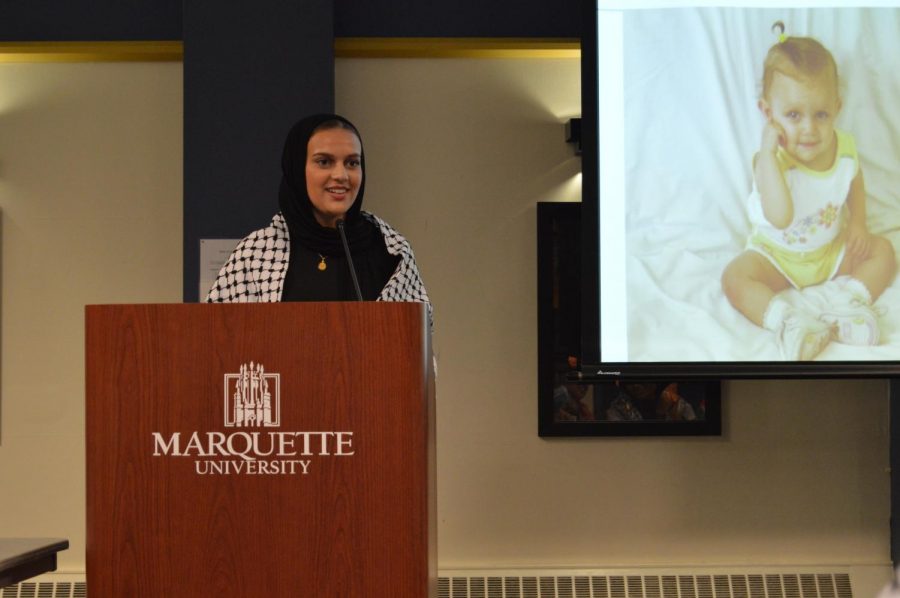 The first Social Justice for Palestine meeting was on Sept. 16

Social Justice for Palestine is an organization at Marquette that brings informational awareness to the ongoing crisis in Israel-Palestine. SJP hopes to educate Muslim and non-Muslim students on events while making sure it is interactive and for the culture.

The first SJP meeting was held Sept. 16 and brought students of different backgrounds together to get informed on the situation in Palestine.

Lena Abukhamireh, a senior in the College of Health Sciences, is president of SJP and planned for the first meeting with her E-Board and said she is ecstatic to be hosting in person.

The first meeting included activities for students that were culturally interactive. In the back there was a henna table. Henna is a temporary body art traditionally used for holidays or special occasions. Students could fill in stencils to give themselves temporary markings on their body.

“I want more than anything, to educate students. I want them to look at the occupation, the genocide and the human rights injustices that is happening in Palestine and understand that this is happening to people. We have to stand up together,” Abukhamireh said.

Dia Shammout, a senior in the College of Health Sciences, said it’s good for students to reach out and attend something they aren’t familiar with.

“I think it’s really important for students to be involved in organizations that go out of their comfort zone. Not only does it help you gain knowledge about stuff that is going on outside of your circle … it’s important for us as conscientious human beings to be able to learn about events like this,” Shammout said.

Recently six Palestinian prisoners escaped from an Israeli prison. They escaped through a tunnel they dug with a rusty spoon. In a way of being aware of the efforts of the men, Abukhamireh played the card game spoons with the students that attended the SJP meeting.

The big winner of spoons won a hatta, which is a black and white scarf worn around the neck. A hatta symbolizes the support and freedom for Palestine.

Isabella Alansari, a junior in the College of Arts & Sciences, is the events manager for SJP. This organization is very important for her because she has family living in Palestine.

“It’s really special [to be a part of this]. I still have family that live in Palestine. It’s scary, sometimes you see every day there is a boy killed on his way home from school … it can be like ‘when am I gonna wake up and see someone that’s in my family,’” Alansari said.

In October 2020, an Israeli court ruled that seven families were to be evicted from their homes by May 2021 in Shiekh Jarrah- a neighborhood in east Jerusalem. Protests ensued and in May 2021, violence broke out on the Al-Asqa compound and Gaza More than 200 Palestinians were killed and over 2,000 were wounded.

Alansari reflects on how she is doing her part.

“It’s nice that I get to be apart of something that can spread awareness. Get more people talking about it because the more people know and talks about it, change can be made” Alansari said.

Abukhamireh said over the summer she had many people reaching out to her to learn more about the organization and about Palestine. She encourages other students to do the same and get involved in the participatory culture.

“Educate yourself, learn more about the issue but also educate those around you. More often than not you find that people don’t know enough about the issue and that’s why they don’t take action,” Abukhamireh said.

Abukhamireh tells students to stay tuned for more events and opportunities with SJP. For more information and to get in contact visit their website, Students for Social Justice of Palestine or find them @sjpmarquette on Instagram and Twitter.

This story was written by Connor Baldwin. He can be reached at Connor.baldwin@marquette.edu