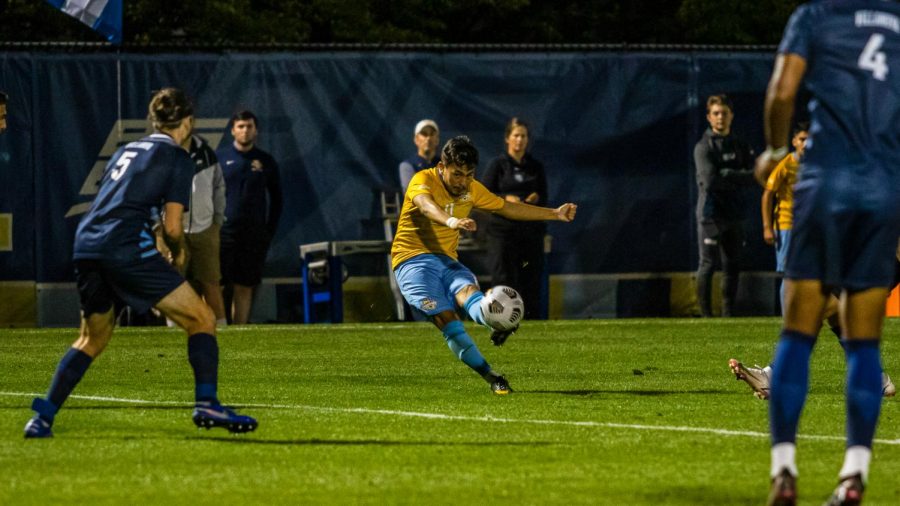 However, the Villanova Wildcats had other plans as they defeated the Golden Eagles 1-0 at Valley Fields.

“We have to change,” head coach Louis Bennett said. “We have to completely stop teams from getting opportunities. We have to make better use of the chances that we have. I love the BIG EAST, but we have to be much better in what we do.”

In the 28th minute, Villanova first-year forward Balthi Saunders broke through the Marquette defense and put one past redshirt junior goalkeeper Chandler Hallwood to give the Wildcats an early lead.

“I’m disappointed, that we let one go in,” Bennet said.

Back-to-back corner kicks at the end of the first half provided  Golden Eagles two opportunities to tie the score up before halftime but both were unsuccessful.

Villanova outshot Marquette 10-4 in the first half.

It was the third time in four games that the Golden Eagles went into halftime with a deficit.

Marquette’s second half was different.

In the 59th minute, redshirt first-year forward Beto Sotto took a shot from far but it sailed over the crossbar.

The Houston, Texas, native would record his third shot of the half in the 82nd might but knocked away from the left corner post.

“It’s frustrating knowing that we had opportunities to win the game, but not being able to execute,” Soto said.

Marquette outshot Villanova eight to one in the second half.

“In the first half it was back and forth, then in the second half we put the game in our hands,” Bennett said. “We had the opportunities but couldn’t put the ball in the back of the net. Had we scored, I believe we would have the game. I’m disappointed that we let a goal in, then we didn’t have the quality to get back in the game.”

Hallwood finished with one save on the night while allowing the lone goal. Meanwhile Williams finished with six saves in the match.

The Wildcats outshot the Golden Eagles 12-11 on the evening.

“We’ve got a huge task ahead of us, Seton Hall is one of the toughest teams in the country,” Bennett said. “They’ve got a lot of older players, and they are a seasoned team.”

Though the task is a hefty, as Marquette is 0-2 on the road this season, Soto said there is only one outcome on tap.

“There’s no other option, we have to come back with a win,” Soto said.