Team handles being away from home 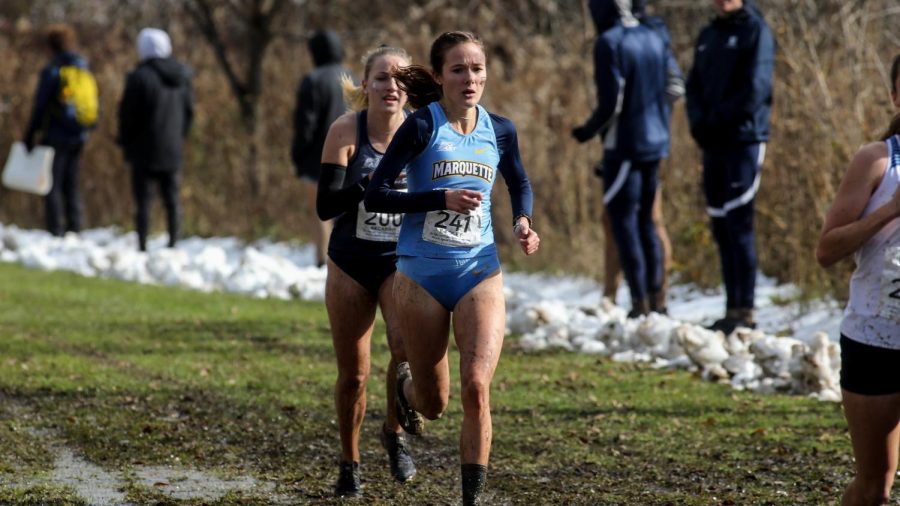 The Marquette cross country team participates in meets all around the country, but not in Milwaukee.

With leaving campus for various practices and meets, the opportunity for Marquette fans to watch the team is slim to none. The closest meet for the Golden Eagles is in Normal, Illinois.

“It’s hard but I think it makes us tough,” senior Emily Foley said. “It would be fantastic to have a fan base and funding that rivals that of the basketball team, but that would not be the true nature of cross-country.”

Cross country is noted to be a traveling sport with athletes on the move for not only meets, but for practices as well.

Head coach Sean Birren said the team takes vans to practice sometimes depending on the distance.

“We want to simulate a cross country course and it’s easier to travel now because of the lessened COVID-19 restrictions,” Birren said. “We can get the vans and not have to have 18 feet of space between everybody.”

Senior August Beyer embraces practicing and racing away from everybody.

“We’re all friends, we have a tight group and it’s really fun,” Beyer said. “We look forward to getting off campus and running somewhere new because we are still with each other.”

Beyer explained that the closest meet is approximately 45 minutes away from Marquette’s campus at University of Wisconsin – Parkside.. Furthermore, he expounded that the farthest location of where they will compete this year will be in Louisville, Kentucky, which is about an eight-hour drive from Milwaukee.

Marquette is known to compete for the NCAA mostly in the states of Kentucky, Indiana and Illinois.

If they make regionals this year, that will take place in Florida.

Foley said at the same time, the cross country team is a non-revenue generating sport.

“We don’t get the attention and support that most other sports receive. We don’t have fancy locker rooms or top of the line facilities or home courses,” Foley said. “We do what we can with what we have and it’s not even about what we don’t have. More or less it would be amazing for people to recognize what we are accomplishing as a team, as well as what we are contributing to Marquette both athletically & academically.”

With that in mind, Birren said it is  important to keep his team motivated.

“The biggest thing is letting them know that the hard stuff we do as athletes on the practice field is going to get them ready to race,” Birren said. “Then, hopefully having their competitive juices flowing that they’re ready to plug in a go after it.”

Foley said it would mean a lot to have a strong fan appearance like seen at basketball, volleyball and soccer events.

“Honestly, I know that cross country will never be at the same level as a lot of other sports such as basketball and volleyball,” Foley said. “I think it would be amazing to have a fan base that sees us as a really cool sport and respect us as athletes on campus and I feel we do get a lot of respect.”

Foley said from being a runner it has made her a better person and she is better for it.

“I feel like not having certain facilities builds character,” Foley said. “We are usually the underdogs, and I think we like it that way.”

At the end of the day, cross country remains a sport and Birren said his athletes have just one job: run.

“Running is a different beast when it comes to athletics. There are no timeouts,” Birren said.

This article was written by Johnnie Brooker. He can be reached at [email protected] or on Twitter @Brookerjr21.